The death of George Floyd incited a series of protests across the United States, including in the world of opera. Mezzo-soprano J’Nai Bridges was invited by the Los Angeles Opera to give a virtual recital shortly after the events. Instead she offered to moderate a panel with fellow Black singers on the issue of race and inequality in their milieu. The company agreed. Among the participants were tenor Lawrence Brownlee, soprano Karen Slash and bass Morris Robinson, all of whom experienced at least casual or implied racism from the beginning of their careers.

Much has changed for the better, of course. But Black conductors, directors and high-profile administrators are still hard to find. This discrepancy might, more than anything else, show that the world of opera continues to cling to its old habits. When you look back at three legendary Black singers, you realize how far they went to accomplish what they did, how they paved the way for the young generation and, unfortunately, how things oddly keep repeating. Marian Anderson (1897-1993), Leontyne Price (b. 1927) and Grace Bumbry (b. 1937), among others, have inspired Black women who fought hard, made it to the top and became pioneers. Here’s what their stories tell us. 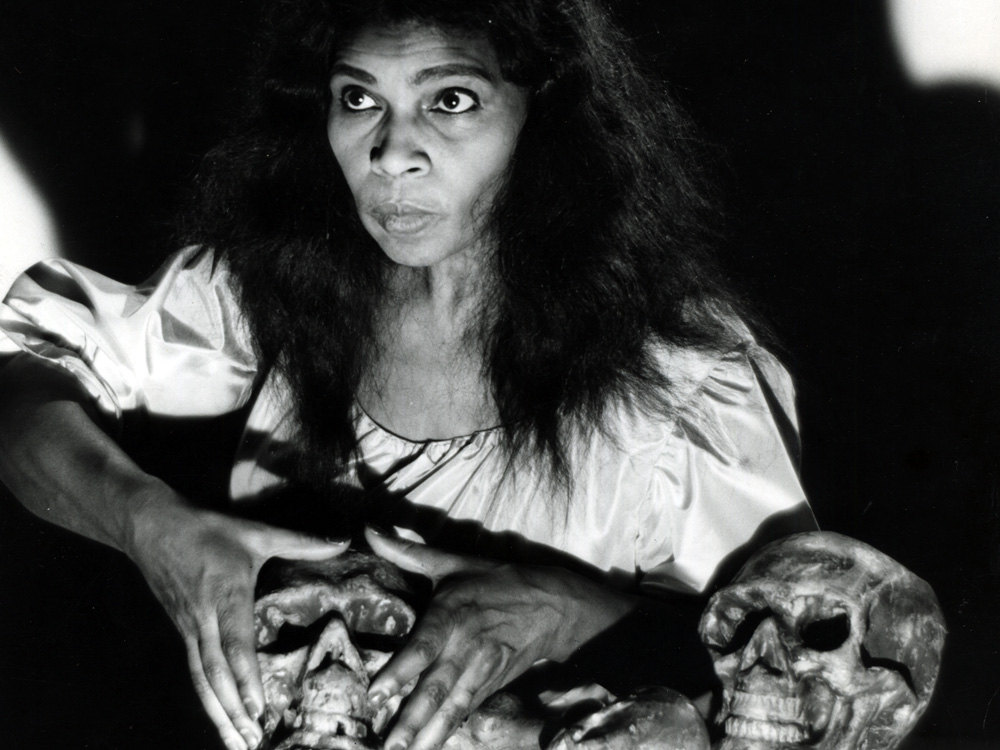 The first Black singer to have performed at the White House, Anderson was born in 1897 and, maybe more than any of her colleagues, had to face racism in segregationist America. Even though she toured throughout the country, gave multiple recitals and gained success as a singer, many hotels and restaurants refused to welcome her. Moreover, in a time when “white only” was the norm, Anderson was denied the permission to perform in certain venues.  Most notoriously, her 1939 concert, which was supposed to take place at the Constitution Hall in Washington, D.C., was prevented from happening by the Daughters of the American Revolution association. Many protested against this decision, including First Lady Eleanor Roosevelt. This led to an increasing support from the press in favor of Anderson’s case. On April 9, 1939, an open-air concert featuring Anderson was made possible thanks primarily to President Franklin D. Roosevelt and his wife. Held on the steps of the Lincoln Memorial, the event attracted approximately 75,000 people, in addition to millions of radio listeners.

In 1955, Anderson made her debut at the Metropolitan Opera, becoming the first Black singer to a major role on the stage. She performed the role of Ulrica from Verdi’s Un ballo in maschera. She was almost 58 at the time and made no further appearances. However, she continued to sing at inaugurations and special ceremonies, notably under the Kennedy administration. As her farewell to the stage, she made an international tour which started at the Constitution Hall, in October 1964, and ended at Carnegie Hall, in April 1965. 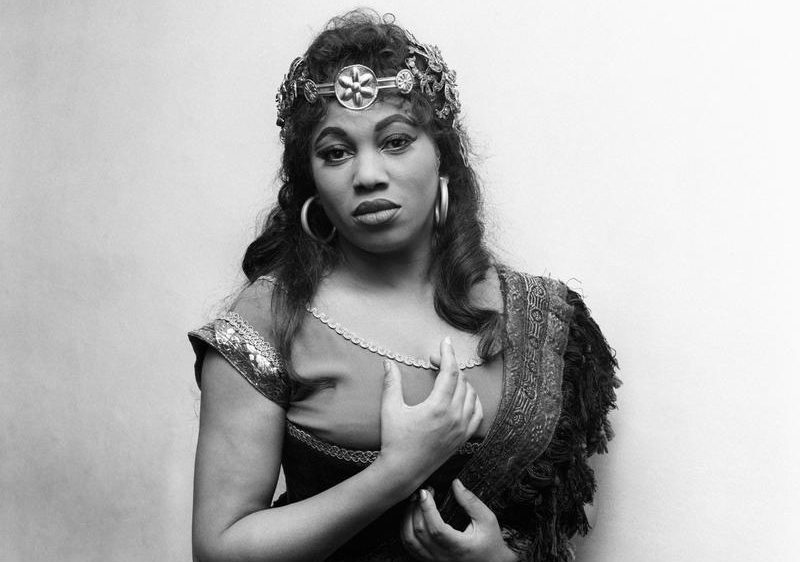 Leontyne Price as Aida at La Scala in 1963

This great soprano’s career was marked by major breakthroughs for the Black community but also symptoms of systemic racism that hindered her development as a singer. At the beginning of her career, Price often sang in all-black operas and rarely was able to go beyond these roles. In 1952, after hearing her in a Juilliard production, composer Virgil Thomson cast her in a revival of his opera Four Saints in Three Acts. She later took on the title female role in Gershwin’s Porgy and Bess, yet another all-black opera.

Despite her colour, Price did manage to thrive and cross boundaries. The Metropolitan Opera invited her to sing “Summertime” at a special event in 1953, at the Ritz Theater, making her the first African American to sing with and for the Met, i.e., not only in one of its productions.

Price went on to sing the title role in Puccini’s Tosca on television and for the NBC Opera Theater, thus marking the first appearance by a Black singer in a leading role in televised opera. Even though this Tosca (1955) didn’t generate much controversy, Price’s later opera broadcasts came to the attention of several NBC affiliates, especially from the South, and these were boycotted because of her race.

There is one role which may have quite literally gotten under Price’s skin. One that defined her throughout her career and kept locking her in a certain pattern. That role is the enslaved Ethiopian princess Aida from Verdi’s magnum opus. To many, Price’s colour was very well suited for the part. She sang it several times in the U.S. before her European debut in 1958, always as Aida, at the Vienna Staatsoper, later at London’s Royal Opera House and at the Arena di Verona. In 1960, she returned to the role for her debut at the Teatro alla Scala in Milan, thereby becoming the first African American to sing a prima donna role in Italy’s most prestigious opera house.

After that, the theatre readily accepted her contractual requirement that no future roles would be denied to her on the basis of race. “All token Blacks have the same experience,” she once said. “I have been pointed at as a solution to things that have not yet begun to be solved, because pointing at us token Blacks eases consciences of millions, and this is dreadfully wrong.”

A similar issue occurred at the Met when Price was invited yet again to perform as Aida, an enslaved person. Price declined the offer. Thanks to her manager’s insistence, she was cast instead in the major role of Leonora (Il Trovatore) and earned more contracts with the company after this successful debut. In 1962, Price became the first Black singer to take on a leading role in a southern venue while touring with the Met. Price allegedly gave this piece of advice that is still pertinent today: “If you are going to think black, think positive about it. Don’t think down on it, or think it is something in your way. And this way, when you really do want to stretch out, and express how beautiful black is, everybody will hear you.” 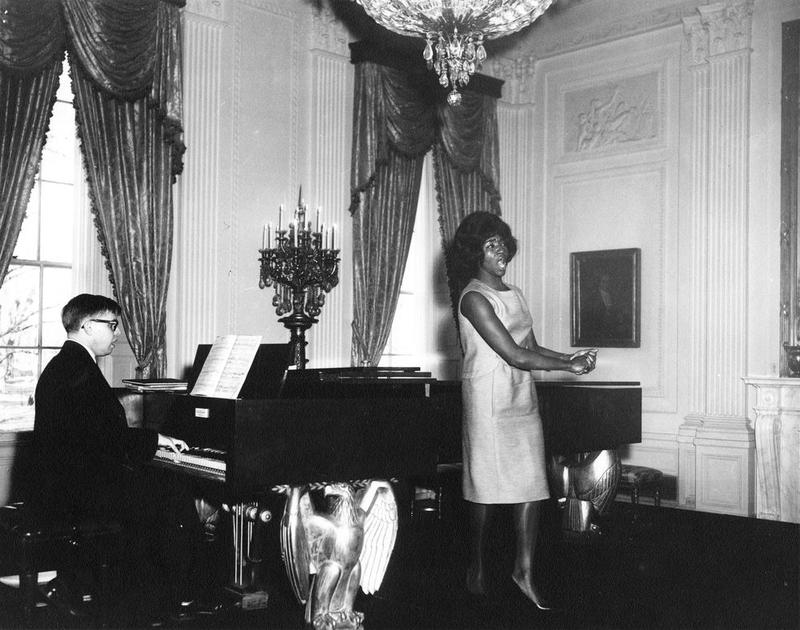 Grace Bumbry in recital at the White House in 1962

Though Grace Bumbry is not quite as famous, her example is no less compelling. At age 17, this soon-to-be mezzo won a talent contest sponsored by St. Louis radio station KMOX. The grand prize included a scholarship to the St. Louis Institute of Music. Bumbry was denied admission on the grounds of race. This didn’t stop her from competing and winning other prizes. After singing on Arthur Godfrey’s Talents Scout show, she received a scholarship to Boston University and went on to study at the Music Academy of the West, in Santa Barbara, with renowned German soprano Lotte Lehmann.

At only 24, Bumbry gained international fame by becoming the first Black Venus in Wagner’s Tannhäuser during the Bayreuth Festival of 1961. This accomplishment stirred controversy among the conservative crowd of Wagnerians. The latter couldn’t deny however the huge success of her performance. Bumbry rose to the level of phenomenon. She was subsequently invited to sing at the White House under the Kennedy administration, becoming only the second Black singer to perform there, after Marian Anderson. Bumbry was well aware that being Black increased the difficulty of achieving a career and surely meant extra work. “You have to convince them that you’re very good, that you’re good enough for them to take a risk,” she said in an interview for the St. Louis Post.