You are at:Home»La Scena Online»Concert Reviews»Yo Yo Ma and TSO in a Deeply Moving Elgar Concerto 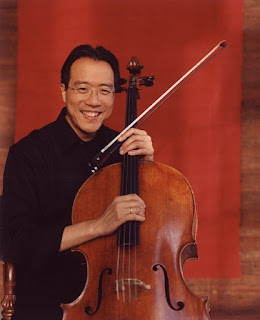 by Joseph K. So

If I may allow myself a rhetorical question – is there another classical musician more beloved in Toronto than Yo-Yo Ma?  Based on the sustained thunderous ovations he received on Wednesday, the first night of his two appearances in Toronto, the answer is a resounding ‘no’.  In my forty years of attending classical concerts in Toronto, I’ve seen many great artists with huge and fiercely loyal fan bases, from Pavarotti to Domingo to Bartoli.  (I’m using singers as examples simply because their fans are particularly rabid)  But the response from the audience on Wednesday surpassed them all. After the conclusion of the Elgar cello concerto, the hall erupted into a virtually complete standing ovation that lasted many minutes. The genuine affection from the audience to those onstage was palpable and the love was returned to the audience by Ma himself. It wasn’t just applause for a job well done, but a heart-felt appreciation of an artist who is in his absolute prime, someone who has embraced Toronto and has returned time and again to our fair city to make joyous music.  Yes, a Yo-Yo Ma concert is always something special.

The program opened with a highly evocative piece by Dmitri Yanov-Yanovsky, a composer from Uzbekistan.  It was commissioned by Ma himself a dozen years ago and has been featured in performances of his Silk Road Ensemble.  It lasts only 16 minutes, but to my ears the extraordinary sounds created by the small group of instruments (solo cello, flute, clarinet, percussion, harp, piano, violin, viola, bass and a previously recorded singing voice) evokes powerful imageries of nature and humans in its midst.  The subtle rise of the Uzbek lullaby and the way it’s weaved into the musical patterns was magical. This soft-grained work was followed by Rachmaninoff’s Symphonic Dances, a piece that appears as brash, forceful, aggressive, driven, and even in a way artificial, aesthetically in stark contrast to the Yanovsky piece. Oundjian drew galvanizing torrents of sound from the Orchestra. To be honest, I don’t think the two works go together very well.

After intermission came the heart of the concert – the sublimely poignant, autumnal cello concerto by Elgar. Ma has had a long association with this piece.  It was mentioned by Oundjian that Ma played it in his first TSO appearance in 1979.  The Elgar was a favourite of the great British cellist Jacqueline du Pre, and it’s well known that when she became stricken with multiple sclerosis in the 1970’s, she did the supreme gesture of leaving her Stradivarius Davidoff to Ma. Her studio and live recordings of the Elgar are considered among the very best in the catalogue.  Her playing is characterized by a certain “heart on sleeve” emotionalism that is extremely touching. To my ears, Ma’s playing of this piece, however wonderful even in the earliest days, has gained a depth and a profundity of understanding that only comes with the passage of time.  On Wednesday, his every inflection, accent, phrasing, placement of rubato etc. was eerily reminiscent of du Pre herself, except Ma was even more emotional, more exaggerated.  The tempo was very, very slow.  The piece lasts about 26 minutes, but I checked my watch and I thought it was very close to 30 minutes all told. Some would call this playing self-indulgent or maudlin and sentimental. Not in my book.  Yes, it took me awhile to adjust in the beginning, and then I was totally drawn into the music. It was a deeply moving experience, something that one only experience on rare occasions in the concert hall.  I am so glad last Wednesday was one of them.