You are at:Home»Education»This Week in Toronto (Sept. 24 – 30)
Advertisement / Publicité 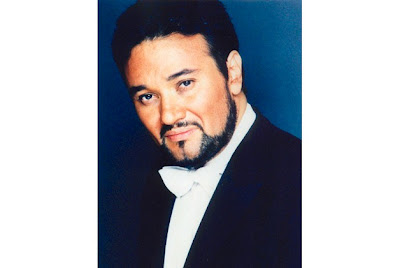 Mexican tenor Ramon Vargas
For opera fans, the big news this week is the opening of the Canadian Opera Company‘s 2012-13 season. This being a Verdi year, many companies are rushing to put on his operas, and the COC is presenting the perennial warhorse Il Trovatore, last heard way back in April 1999 with Richard Margison and Czech soprano Eva Urbanova. Opening night is Saturday Sept. 29, with a stellar cast led by Mexican tenor Ramon Vargas in his first Manrico. Vargas sang previously at the Four Seasons Centre in the COC Diamond Anniversary Gala concert two years ago, replacing an indisposed Ben Heppner. It’s great to have him back in a complete opera. I interviewed Vargas recently and the interview will appear on this blog very soon.  Leonora is South African born, American trained soprano Elza van den Heever who is making quite a splash in the opera world. Russian contralto Elena Manistina is Azucena and Canadian baritone and COC favourite Russell Braun sings his first Count di Luna.  Italian maestro Marco Guidarini is at the helm. The production comes from Opera de Marseille. There are ten performances in all, lasting until Oct. 31 at the Four Seasons Centre. Given such a terrific cast, it is not to be missed. http://coc.ca/Home.aspx
Tomorrow (Tuesday Sept. 25) marks the birth of pianist Glenn Gould 80 years ago. This evening (Monday Sept. 24) the Royal Conservatory of Music is presenting a one-of-a-kind Glenn Gould birthday bash at Koerner Hall. Called Glenn Gould’s Birthday BACHanalia, this is an unconventional event, a sort of eclectic repertory/instrument crossover – you’ll hear the Goldberg Variations played on a harp, a flute sonata played on a harmonica, and a Bach Partita given the bluegrass improvisational treatment. Participating musicians include Mark O’Connor, Howard Levy, Sylvain Blassel and the Dave Young Trio.  Definitely worth considering, and given there are only 1135 seats, act quick! http://rcmusic.ca/
Also in conjunction with the Gould birthday, the University Toronto Faculty of Music is hosting The Glenn Gould Legacy: A Symposium on Monday 1:30 to 4:30 pm at Walter Hall, Edward Johnson Building on the campus of the University of Toronto. Tim Page moderates a panel of speakers that includes James Wright (Carleton University), Paul Theberge (Carleton University), Junichi Miyazawa (Aoyama Gakuin University, Tokyo), Lucille Mok (Harvard University), Arved Ashby (Ohio State University), Colin Eatock (Toronto journalist) and David Jaeger (CBC). And the event is free! http://www.music.utoronto.ca/site5.aspx
The Toronto Symphony Orchestra, which opened last week, is featuring Korean pianist Joyce Yang as soloist in Rachmaninoff Piano Concerto No. 2. Yang was the second prize winner of the 2005 Van Cliburn Competition. The other well known piece on the program is Mussorgsky’s Pictures at an Exhibition. Opening the concert is Canadian composer Kati Agocs’ Shenanigans, a work unfamiliar to me. Peter Oundjian leads the TSO forces in two performances, Thurs. Sept. 27 at 8 pm and Sat. Sept. 29 at 7:30 pm, with a post-concert party in the lobby on Saturday.  http://tso.ca/Home.aspx