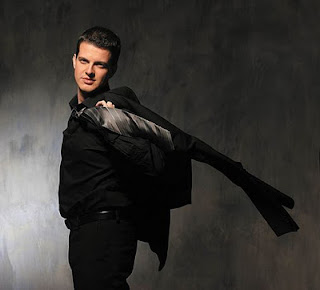 Opera Atelier‘s Don Giovanni opened last Saturday to enthusiastic audience reception and the run continues this week. I saw opening night and it was a very fun show, with gorgeous unit set, colourful period costumes, fine singing – particularly from Canadian baritone Phillip Addis in the title role – and lively stage direction by Marshall Pynkoski. The opening night performance was very well attended and full of young people. Four more performances this week, on Nov. 2, 3, 5, and 6, all at 7:30 p.m. at the Elgin Theatre. http://operaatelier.com/season/dongiovanni.htm
Another high profile event is the recital by French countetenor Philippe Jaroussky at Royal Conservatory of Music’s Koerner Hall. Unquestionably Jaroussky is one of the best in front of the public today. His voice is very beautiful and natural sounding, without the artificiality that can afflict some countertenors. He is also a popular recording artist – his recent recording of Caldara’s castrati arias has garnered critical acclaim. He will be singing Handel and Vivaldi in his Koerner Hall concert, accompanied by the baroque orchestra, Apollo’s Fire. Performance tomorrow on November 1, 8 p.m. at Koerner Hall. Canadian pianist Angela Hewitt returns to Toronto for a recital of Bach, Ravel, Faure and Debussy at Koerner Hall on Sunday Nov. 6 3 p.m.
http://performance.rcmusic.ca/
The Toronto Symphony Orchestra is presenting performances of Dvorak’s Symphony No. 7, paired with the Mendelssohn Violin Concerto with soloist Stefan Jackiw. Guest conductor Christof Koenig is on the podium, for three shows – full program on Thursday Nov. 3 at 2 p.m. and Saturday Nov. 5 at 7:30 p.m. There is also a so-called “Afterworks” concert on Wednesday Nov. 2 that starts at 6:30 p.m. It is designed for those just getting off work but decide to stick around downtown rather than fighting rush hour traffic – what a brilliant idea! The show is only 75 minutes long without an intermission. Also the opening Bartok Dance Suite is omitted. http://tso.ca/Home.aspx For those not in a rush to get home, they can always stay for the Joan Baez Concert that starts at 9 p.m.! Music fans of a certain age – including yours truly, will have fond memories of legendary singer Baez, and her return to Toronto is always a special occasion. http://www.roythomson.com/
A short trek up Yonge Street to the beautiful Richmond Hill Performing Arts Centre is Puccini’s Madama Butterfly presented by Opera York. Soprano Deirdre Fulton is Butterfly and Romulo Delgado is Pinkerton. Sabatino Vacca conducts. Performance on Thursday and Saturday 8 p.m. http://www.operayork.com/index.html