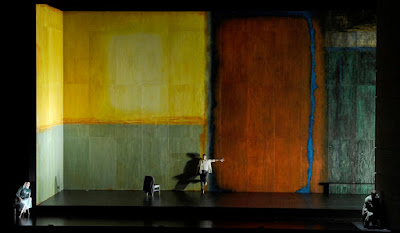 The fall season of the Canadian Opera Company continues with La traviata and Pyramus and Thisbe. Last week, I attended the premiere of P&T, a triple bill that combined two Monteverdi fragments with a new opera composed by Canadian Barbara Monk Feldman, an interesting juxtaposition.  In the early publicity material put out by the COC, they used the Nicolas Poussin painting which inspired Monk Feldman to compose this opera.  Visually the production with its Rothko-inspired backdrop has absolutely nothing to do with the Poussin painting (see above). Similarly, the music as expected is decidedly contemporary. I will have a full review to appear in an upcoming issue of Opera from London, UK. For now, I can say it’s a challenging score and stylistically unlike any opera one would have heard in an opera house. The three principals, mezzo Krisztina Szabo, baritone Phillip Addis and tenor Owen McCausland were outstanding on opening night, as was the chorus and orchestra under Johannes Debus.  Kudos to the chorus particularly for learning the sparse yet difficult vocal parts. Performance of Pyramus and Thisbe this week on Wednesday Oct. 28 7:30 pm at the Four Seasons Centre. Meanwhile, La traviata conducted by Marco Guidarini continues with soprano Ekaterina Siurina, tenor Charles Castronovo and baritone Quinn Kelsey on Oct. 29 and Nov. 1, this last a matinee at 2 pm. The Canadian cast (soprano Joyce El-Khoury, tenor Andrew Haji, and baritone James Westman) can be heard on Oct. 30 7:30 pm.     http://www.coc.ca/Home.aspx 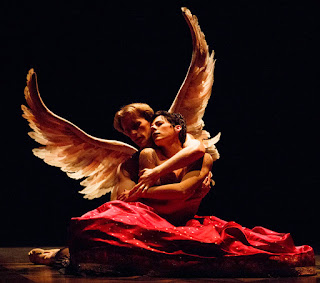 Opera Atelier‘s eye popping production of Lully’s Armide concludes this week at the Elgin Theatre on Oct. 27, 30, 31. One of the most successful of OA productions, it premiered in 2005 and revived in 2012. Like 2012, it travels to Versailles after the Toronto run. Here’s my review of the current revival – http://www.musicaltoronto.org/2015/10/23/scrutiny-opera-atelier-armide-continues-to-weave-its-magic/  It stars OA frequent guest American soprano Peggy Kriha Dye in the title role and Canadian tenor Colin Ainsworth as Renaud. David Fallis leads the Tafelmusik Baroque Orchestra. http://operaatelier.com/ 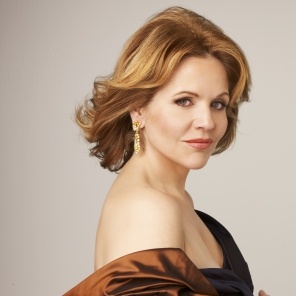 Soprano Renee Fleming
America’s prima donna Renee Fleming returns to Toronto in recital at Roy Thomson Hall on Oct. 30 8 pm.   The 56 year old soprano is gradually phasing out her operatic career in favour of concerts and recitals. She shot to fame as one of the Metropolitan Opera Auditions winners in 1988, the same year as Canada’s own Ben Heppner. I still recall her beautiful Contessa in Le nozze di Figaro in 1991, at Opera Hamilton!  In the interview in the November issue of Opera (London, UK), she reveals that the only opera performances left on her upcoming schedule is the Marschallin in Der Rosenkavalier.  This is a role many prima donnas in the past have chosen as their farewell – two I’ve seen were Evelyn Lear and Elisabeth Soderstrom. I feel fortunate to have caught Fleming as Madeleine in Capriccio at the Semperoper Dresden last year, even though she sadly cancelled her originally scheduled Arabella. This Roy Thomson Hall appearance is likely one of the few opportunities left to hear her.  On the program is Canteloube’s Songs of the Auvergne. plus Rachmaninoff, Schumann and Strauss with pianist Gerald Martin Moore.  http://www.roythomson.com/eventdetail/ReneeFleming 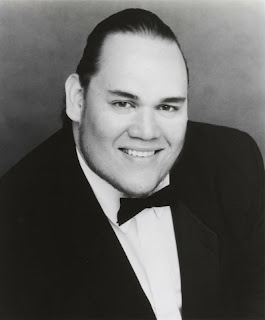 Baritone Quinn Kelsey
Opera fans can catch the great voice of baritone Quinn Kelsey in a free noon hour recital, Songs From the Heart, at the Richard Bradshaw Amphitheatre on Tuesday Oct. 27 singing a selection of English songs and German Lieder, including Vaughan Williams’ Songs of Travel, a desert island song cycle for me. Kelsey is in town as Germont in La traviata, and he sang magnificently on opening night. His Rigoletto and Sancho Panza at the COC were equally terrific. This is really a recital not to be missed. Be sure to get there an hour ahead to line up for a seat. http://www.coc.ca/PerformancesAndTickets/FreeConcertSeries/October.aspx

Conductor John Storgards (Photo: Marco Borggreve)
The Toronto Symphony Orchestra is presenting Sibelius’ Symphony No. 2, as part of the TSO’s Decades Project.  Also on the program is the Bartok Violin Concerto No. 1, with Austrian violinist Benjamin Schmid.   On the podium is guest conductor Finnish maestro John Storgards.    http://www.tso.ca/en-ca/concerts-and-tickets/2015-2016-Season/EventDetails/Sibelius-Symphony-2.aspx
Given this is Halloween weekend, the string musicians of the Toronto Symphony Orchestra is playing the soundtrack of the Hitchcock mega hit Psycho. I recall seeing it in the cinema when it first came out and that shower scene with Janet Leigh and Anthony Perkins scared the bejesus out of me!  Sure this film is available on DVD, but it’s nothing like experiencing it with a live orchestra playing the Bernard Herrmann score. The conductor is Constantine Kitsopoulos. Saturday Oct. 31st 7:30 pm.  http://tso.ca/en-ca/concerts-and-tickets/2015-2016-Season/EventDetails/Psycho-with-Live-Orchestra.aspx