You are at:Home»Classical Music»Contemporary»This Week in Toronto (Oct. 14 – 20)
Advertisement / Publicité

This Week in Toronto (Oct. 14- 20)
– Joseph So
The big news this week for opera lovers is the appearance of heldentenor Ben Heppner in the title role of Canadian Opera Company‘s Peter Grimes, having recovered from his vocal cord inflammation that knocked him out of the dress rehearsal and opening night. While American tenor Anthony Dean Griffey filled in superbly, it’s great to have our own Ben back. For one thing, the Canadian has age and experience on his side, making his Grimes that much more weathered and poignant. Friends who saw the performance on Oct. 8th reported that Ben gave the most gut wrenching Mad Scene in Act 3, a tour-de-force that reduced members of the audience and the chorus to tears. This is a fantastic opportunity to experience the artistry of the great Ben Heppner and really not to be missed! Performances on Oct. 17 at 7:30 pm and a matinee on Oct. 20 2 pm at the Four Seasons Centre.   http://www.coc.ca/Home.aspx 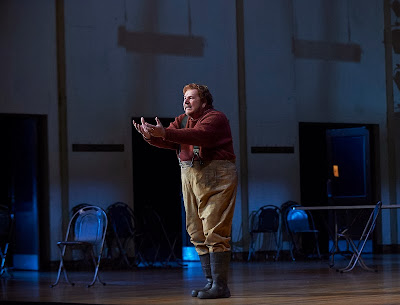 Ben Heppner as Peter Grimes (Photo: Michael Cooper)
In the meantime, the alternate cast of La boheme gets to strut their stuff this week, on Oct. 16 and 19.  Canadian soprano Joyce El-Khoury, who has been singing Musetta in this run, takes over as the tragic Mimi, and she is partnered by American tenor Michael Fabiano. Opera fans will remember Fabiano in the documentary The Audition shown some years ago at the Met in HD series. Since winning the Met Auditions, Fabiano’s career has really taken off.  Canadian soprano and former COC Ensemble Studio member Simone Osborne is Musetta, and another excellent Canuck, baritone Phillip Addis, will take on Marcello for size, vacating the role of Schaunard for the very promising Ensemble Studio baritone Cameron McPhail.  If all these musical chairs are making opera fans dizzy, rest assured that the voices are all beautiful. The last COC event I want to highlight is a noon hour concert on Oct.15 at the Richard Bradshaw Amphitheatre featuring bass Robert Pomakov and the Gryphon Trio, in a newly commissioned work by Ukrainian composer Bohdana Frolyak based on text by Ukrainian poet Taras Schevchenko. Full program details at http://files.coc.ca/pdfs/concert131015.pdf 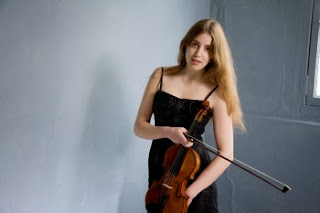 Violinist Vilde Frang (Photo: Lilian Birnbaum)
Norwegian violinist Vilde Frang  < http://www.vildefrang.com/ > is one of a seemingly endless supply of brilliant young woman instrumentalists who are not just great artists with musicality to burn, but also lovely to look at. Actually this applies to all of classical music, but for some reason especially instrumentalists. Since appearing as soloist with Mariss Jansons and the Oslo Philharmonic at the age of 12, Frang has captured the imagination of the public. Today she is in the front ranks of young musicians concertizing all over the world. Currently she is on a North American tour that is taking her to Montreal, Toronto, New York and Vancouver.  In Toronto, she will be playing the wonderful Bruch Violin Concerto, on Saturday Oct. 19 and Sunday Oct. 20. This is a very popular program that includes Dvorak’s Slavonic Dances, plus selections from Bizet’s Carmen and from Elgar’s Enigma Variations.  On the podium is the up and coming French Canadian conductor Jean Claude Picard, who is currently Assistant Conductor of the Royal Scottish National Orchestra. < http://www.jeanclaudepicard.com/ >

French Canadian conductor Jean Claude Picard
In addition to the Frang concerts, the Toronto Symphony Orchestra is also presenting Cirque de la Symphonie, as part of its Pops series conducted by Steven Reineke. This concert features not just musicians but aerialists, acrobats, contortionists, dancers, jugglers et al! It’s bound to appeal to the young people and the young at heart. The music is a real potpourri of the “greatest hits” from Khachaturian’s Sabre Dance to Wagner’s Ride of the Valkyries. Maybe not a concert for the seasoned aficionados, but I never scoff at these shows as that’s how I was introduced to the joys of classical music fifty years ago!  Three performances, on Oct. 15 at 8 pm, and Oct. 16 at 2 pm and 8 pm. http://tso.ca/Home.aspx 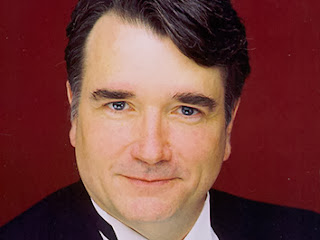 Baritone John Fanning is Opera Hamilton’s Falstaff
Within an easy – when the traffic behaves – drive down the QEW is Opera Hamilton, now performing in the intimate Dofasco Centre for the Arts. I’ve seen some really wonderful singers there over the last thirty years, big names like Carlo Bergonzi as Cavaradossi, and a very young Renee Fleming as the Contessa in Nozze. The OH season opens with a salute to Verdi, in a production of Falstaff with veteran Canadian baritone John Fanning takes on the role Sir John Falstaff (I believe) for the first time. In a long and distinguished career that began as a very early member of the COC Ensemble Studio, Fanning combines a gorgeous lyric baritone with an ingratiating stage presence. He was heard quite a few times in principal roles at the COC – I recall a memorable Dick Johnson in Fanciulla and Wotan in Das Rheingold. Fanning is now transitioning to teaching so this represents an increasingly rare chance of hearing this singer. Soprano Lyne Fortin is Alice, baritone James Westman is Ford, and COC Ensemble Studio soprano Sasha Djihanian is Nannetta. Four performances on Oct. 19, 22, 24, 26. http://operahamilton.ca/index.html

The Annual Schubertiad at the Off Centre Music Salon is happening on Sunday Oct. 20 at the Glenn Gould Studio.  Violinist Jacques Israelievitch joins soprano Jennifer Taverner and tenor Jeffrey Hill in an afternoon of Schubert Lieder. Both singers are making their debuts with Off Centre. http://offcentremusic.com/index.html