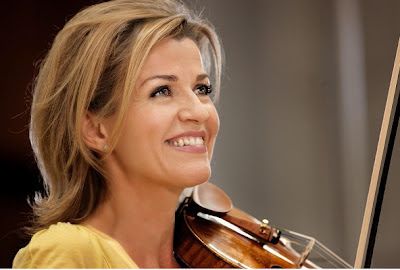 Violinist Anne-Sophie Mutter (Photo: Harald Hoffmann/DG)
German pianist Anne-Sophie Mutter, always a favourite of Toronto audiences, returns this week for two performances of the Bach Violin Concerto No. 2 BWV 1042 with the Toronto Symphony Orchestra, conducted by Michael Francis. Mutter is also playing In tempus praesens, a piece composed for her by Sofia Gubaidulina. Rounding out the program is Beethoven’s Symphony No. 5.  Oct. 3 and 4 8 pm. at Roy Thomson Hall.   http://tso.ca/Home.aspx
The Canadian Opera Company opened its new season at the Four Seasons Centre last Saturday with Verdi’s Il Trovatore.  This is a real singer’s opera and boy, what singing on opening night!  South African soprano Elza van den Heever was vocally stunning as Leonora, and Ramon Vargas had a triumph in his first-ever Manrico. Canadian baritone Russell Braun is singing his first Verdi role, as the villain Conte di Luna; Russian mezzo Elena Manistina, an Operalia winner ten years ago, makes her COC debut as Azucena. Marco Guidarini, who last conducted Simon Boccanegra here, is at the helm. The 10-performance run continues this week on Tuesday Oct. 2 and Friday Oct. 5 7:30 pm at the Four Seasons Centre. The other COC production in the fall season, Johann Strauss’ frothy Die Fledermaus, opens on Thursday Oct. 4.  Canadian tenor Michael Schade, a celebrated Alfred, tries his hand as Eisenstein. American soprano Tamara Wilson, last heard locally as Elettra in Idomeneo, returns as Rosalinda. Canadian tenor and former COC Ensemble Studio member David Pomeroy is Alfred, mezzo Laura Tucker sings the trouser role of Orlofsky, and another Ensemble Studio graduate, Peter Barrett, is Dr. Falke. Two current Ensemble sopranos, Ambur Braid and Mireille Asselin, share the role of the saucy maid Adele. Yet another former Ensemble member, James Westman, does a star turn as Frank.  COC Music Director Johannes Debus conducts his first Fledermaus. Christopher Alden is the director – among his previous COC credits was the production of Flying Dutchman, which incidentally is travelling to Opera de Montreal for their upcoming performances next month. With one of the provocative Alden brothers staging the Strauss, you can expect the unexpected when it comes to mis-sen-scene. Early word indicates a production of the gender-bender variety with a surfeit of magnificent costumes.  On the recital front, there are three noon hour recitals this week – a jazz and a piano concerts, plus one featuring future voices from the University of Toronto Opera Division under the direction of Michael Albino. The budding singers will perform arias and duets from operas by Donizetti, Offenbach, Flotow and Britten. This last concert is appropriately called The Shape of Things to Come. To view the program, click http://files.coc.ca/pdfs/concert121003.pdf  These noon-hour events at the Richard Bradshaw Amphitheatre are popular and free, so be sure to line up an hour ahead to ensure a seat. http://coc.ca/Home.aspx
Other noteworthy events this week include a concert by the Gryphon Trio at the University of Toronto’s Walter Hall on Monday Oct. 1 7:30 pm. It is the Ensemble in Residence at the U of T. They are playing Brahms’ Clarinet Trio with James Campbell, and Dvorak’s “Dumsky” Piano Trio. The Royal Conservatory Orchestra under the direction of Uri Mayer is playing Brahms’ Symphony No. 4, plus Ginestera’s Harp Concerto and the Cuban Overture by Gershwin at Koerner Hall on Oct. 5 8 pm. Details at http://rcmusic.ca/