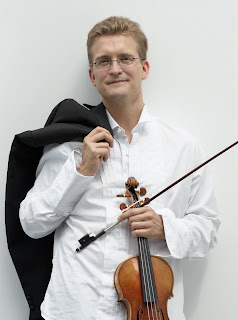 The Toronto Symphony Orchestra has a surefire program this week – a winning combination of Wagner, Tchaikovsky and Rachmaninoff! Back in town is the terrific Christian Tetzlaff playing the Tchaikovsky Violin Concerto in D Major Op. 35 Also on the program is the Rachmaninoff Symphony No. 3 in A Minor Op. 44 and Wagner’s Prelude to Parsifal. British conductor Mark Wigglesworth is at the helm. The energetic Mr. Tetzlaff has great musicality and technique to burn, so this is my choice of exciting event this week. Two performances, Wednesday Dec. 1 and Thursday Dec. 2, both at 8 pm. For more information, go to http://tso.ca/Home.aspx
Toronto opera fans will likely remember bass-baritone Pavlo Hunka, who has sung many times with the COC, in such roles as Falstaff, Hunding, and Golaud, among others. He is back in Toronto this week for the launch of the 6 CD set of Mykola Lysenko Art Songs. This lavishly produced and beautifully illustrated box set is the brainchild of Hunka, a UK born singer to a Ukrainian father and English mother. It is the lifelong dream of Hunka to introduce Ukrainian art songs to the world, through the recording of the approximately one thousand classical songs composed by Ukrainian composers. This release follows the 2 CD set of Stetsenko songs released in 2006. I recently interviewed Hunka about this project, and you can read about it in Fall/Winter 2011 issue of The Music Scene, available for view and download at www.scena.org. Well, the launch takes place on Sunday Dec. 5 at 4 pm, at RCM’s Koerner Hall. The centerpiece of the launch is a concert with the participation of sopranos Monica Whicher and Krisztina Szabo, baritone Russell Braun, and bass-baritone Pavlo Hunka. They will be singing selections from the collection of 124 songs of Lysenko. For more information, go to http://www.uasp.ca/indexMusica.cfm
Tafelmusik presents a program of concertos and symphonies of Mozart and Haydn this week with British harpsichordist Richard Egarr as the guest orchestra leader and soloist at the fortepiano. The symphonies are Mozart’s No. 1 K. 16 and Haydn’s No. 44 in E Minor, “Trauersymphonie“. The two concertos are Mozart’s No. 12 K. 414 and Haydn’s No. 11. There are four performances, Dec. 1, 2, 4 and 5 at their usual venue, Trinity St. Paul Centre. The Wednesday Dec. 1 performance is “Wednesday Night Talkback” where the audience has an opportunity to meet Maestro Egarr after the show. For ticket information and the various start times, go to http://www.tafelmusik.org/concerts/concert_MozartandHaydn.htm
With Christmas drawing ever closer, many organizations, particularly choral groups, are gearing up! The excellent choral group, Pax Christi Chorale is presenting Bach’s Christmas Oratorio 1 and 4, Cantata 140 “Wachet Auf. ” Howard Dyck, retired since last May as the conductor of the Grand Philharmonic Choir in a memorable Verdi Requiem, is the guest conductor. The soloists are soprano Agnes Zsigovics, mezzo Iasmina Pataca, tenor Cory Knight and baritone Matthew Zadow. I am only familiar with Zadow’s voice. He was a student of Canadian baritone Bruce Kelly, and I heard Matthew as a fresh-voiced Count in Opera York’s Le nozze di Figaro about five years ago. He has since relocated to Belgium, so it is good to have him performing on this side of the pond. Two shows on Saturday 7:30 pm and Sunday 3 pm at Grace Church on the Hill. Go to http://www.paxchristichorale.org/ for more information.
The Amadeus Choir under conductor Lydia Adams is putting on the ever-popular Messiah at the Metropolitan United Church in downtown Toronto. With a choir of 115 strong voices, their choral performances are always enjoyable. Soloists are soprano Jennifer Taverner, mezzo Jennifer Enns, tenor Patrick Huang and bass-baritone Giles Tomkins. The performance is on Friday Dec. 3 at 8 pm. Go to http://www.amadeuschoir.com/Default.aspx for more information.
For something different – definitely un-Christmasy – is An Evening of Kurt Weill presented by students of the Glenn Gould School of the Royal Conservatory of Music. On the program are cabaret songs. One doesn’t often get to hear young voices singing Kurt Weill – perhaps because the world-weary quality of some of the songs are often associated with mature voices. So this is definitely worth hearing. Performances on Friday Dec. 3 and Saturday Dec. 4, both at 7:30 pm – http://performance.rcmusic.ca/viewallconcerts
On Sunday Dec. 5 at 2:30 pm, Aldeburgh Connection is presenting The Year of Song: a Schumann Celebration. The concert celebrates the 200th anniversary of the birth of Schumann. On the program are two fine singers, soprano Erin Wall and baritone Philip Addis. Usually, 1840 is referred to as Schumann’s “year of the song.” A sufferer of bipolar affecting disorder, Schumann was on his manic high in 1840 and he produced some of his greatest works on that year. I assume some of these songs from 1840 will be on the program. As usual, Stephen Ralls and Bruce Ubukata at the piano. No program details at the website – http://www.aldeburghconnection.org/index.html