You are at:Home»Scena Arts»Dance»This Week in Toronto (May 31 – June 6)
Advertisement / Publicité 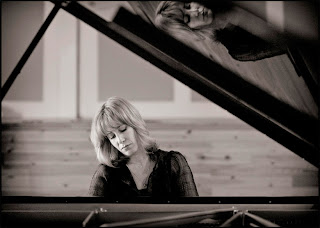 The concert pick for me this week is the appearance of Argentine pianist Ingrid Fliter with the Toronto Symphony Orchestra. She is playing Chopin’s Piano Concerto No. 2 in F Minor, Op. 21. She won the Silver Medal in the 2000 Chopin Competition in Warsaw, the same year that the Chinese pianist Yundi Li – now re-branded as Yundi – won the Gold Medal, the first time that prize was awarded for many years. Despite coming in second, Ms. Fliter has gone on to a highly respectable career. A glance at her 2010-11 season on her website at www.ingridfliter.com shows that she is very busy concertizing, with lots of U.S. dates, plus a tour of Japan and Australia. Her appearance this week with the TSO playing the Chopin piano concerto conducted by Peter Oundjian is certainly worth attending. Also on the program is Mahler Symphony No. 1 in D major “Titan.” What makes this interesting is the including of Blumine, the second movement from this Symphony that Mahler subsequently discarded. It was thought lost until it showed up for auction at Sotheby’s in the 1960’s. This fragment received its first independent performance at the Aldeburgh Festival in July 1967, conducted by Benjamin Britten.
Now that the Canadian Opera Company is in hiatus, the Four Seasons Centre has been taken over by the National Ballet of Canada for its summer season. The centerpiece of this week’s performance is Jerome Robbins’ West Side Story Suite. With music by Bernstein and lyrics by Stephen Sondheim drawn from the original Broadway score of West Side Story, this high energy work is sure to please. Sharing the spotlight is a world premiere, – Finnish choreographer Jorma Elo’s Pur ti Miro. Rounding out the evening is Robbins’ Opus 19/The Dreamer, set to Prokofiev’s Violin Concerto No. 1 in D Major. Performances on Friday, Saturday and Sunday at 7:30 pm, and Saturday at 2:00 pm. These performances are presented in conjunction with the Luminato Festival which begins next week. Go to http://www.national.ballet.ca/ for more information.
Last Friday, I attended a screening of Rufus Wainwright: Prima Donna, a documentary on the singer/songwriter and the making of his first opera, Prima Donna that is coming to the Luminato Festival. I have to say until a few months ago, I had not heard a note of his music, and barely knew of his existence. The first time his name came into my consciousness was the news that he was commissioned by Peter Gelb and the Met to write an opera, about three years ago. The next thing I heard was a year or so later, when it was announced that due to artistic differences, he and the Met had parted company. Prima Donna had its world premiere in July 2009, not at the Met but in Manchester, UK, by Opera North. This intelligent, well crafted and entertaining documentary tells the story of Rufus Wainwright, his attraction to opera, and the creative process of tackling something as monumental as an opera from someone who is grounded in the pop music world. Wainwright’s motivation to compose this was the late Maria Callas. Indeed the central figure of Prima Donna – sung in the opera by Scottish soprano Janis Kelly – is modeled after Callas. The opera from what I have read – and look forward to seeing – is evocative of a film made several years ago by Franco Zeffirelli starring Fanny Ardant in the role of Callas, although there is no reference to this in the documentary. In any case I find it enormously absorbing and totally fascinating. The music is very accessible and emotionally charged. The documentary has footage of soprano Renee Fleming singing the praises of Wainwright. Janis Kelly has a beautiful lyric soprano voice and from the little we hear of her singing and acting in the film, she’s ideal in this. Now I am really looking forward to attending the show at the Elgin (June 14, 16, 18, 19), which will be its North American premiere! Whether Prima Donna is opera in the traditional sense is open to question. Certainly there are major differences in the creative process. For example, Wainwright hired an assistant to help him with orchestration, which was done using computer software, a very different creative process from the traditional operatic orchestration! In the final analysis, perhaps it no longer matters as the primary goal of a work is to have something to say, to communicate, and to engage the audience, all of these I believe Prima Donna has done. I will have more to talk about this and the Luminato Festival next week.
Speaking of festivals, now that we are into June, various summer music festivals are gearing up. One of them, Music at Sharon, is having an early start, with a concert on Sunday June 6 3 pm, given by rising mezzo-soprano Wallis Giunta. Program detail is not available except that the songs of Schumann will be featured. I recall her Dorabella at the Glenn Gould School of the RCM really wowed me last year. Since then she has joined the COC Ensemble, and appeared as a very engaging Cherubino for Opera Atelier. She is definitely a singer to watch. If you have never been to the Sharon Temple just north of Toronto, it is definitely worth a visit. Go to their website at http://www.sharontemple.ca/ for more information on the concert and the venue.