You are at:Home»Classical Music»Orchestral»This Week in Toronto (March 15 – 21)
Advertisement / Publicité 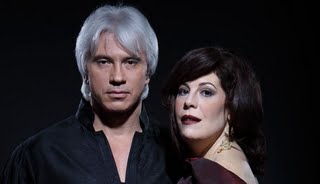 Dmitri Hvorostovsky and Sondra Radvanovsky
(Photo: Pavel Antonov)
The big news for voice fans this week is the blockbuster concert starring Dmitri Hvorostovsky and Sondra Radvanovsky on Saturday 8 pm March 20 at Roy Thomson Hall. It is part of a concert tour the two are taking to a number of cities in North America, including Montreal and New York. This event is not to be missed! For a little preview, Radvanovsky will be giving a mini-recital live from the concert lobby at The New Classical 96.3 FM tomorrow (Tuesday 16) at 1 pm. You can tune in to your radio, or listen to it in a webcast. I am not positive but the concert may even be available for view on the website. Go to http://www.classical963fm.com/contests/concert-lobby-sondra-radvanovsky (Note: I just had confirmation from Linda Litwack, the publicist of this concert for Show One Productions that the concert will indeed be videocast live on the internet!)

Hvorostovsky is of course a frequent visitor to Toronto – I must have heard him here close to ten times since his first appearance here, around 1992. And I try to catch him wherever I can in my operatic travels. It is rare, however, to find Sondra Radvanovsky singing on local stages. This is particularly strange as she has been living in the GTA for quite a number of years, having married a Canadian. I heard her at the Met and Santa Fe as Violetta in La Traviata, but in Toronto, it was limited to only the LUNA concert of the first year of the Luminato Festival. If memory serves, she sang Casta Diva from Norma and wowed everyone. With her voice, it just takes two seconds and you just know that this is not your usual soprano voice. It is dark, rich, powerful, expressive, with stunning breath control and exemplary agility. It is, in fact, an authentic Verdi soprano, an extremely rare species. She arrives home fresh from a triu

Another exciting event this week is the appearance of Valery Gergiev and the Mariinsky Orchestra (formerly the Kirov Orchestra), all the way from St. Petersburg. Anytime this orchestra tours, it is always an unforgettable event, so this time it’ll be no different. There will be different programs on the two nights. The first, on March 16, has Berlioz’s Royal Hunt and Strom from Les Troyens and selections from Romeo et Juliette, and Tchaikovsky Symphony No. 5; the second performance has Denis Matsuev playing Rach 3, and Shostakovich Symphony No. 15! Either program is terrific and if you can, go!

The Aradia Ensemble under conductor Kevin Mallon presents the music of Purcell’s Theatre Music (Don Quixote presented with excerpts from Thomas D’Urfey’s play Boduca), on Sunday, 8 pm March 21, at the Glenn Gould Studio. The soloists are sopranos Eve Rachel McCleod and Laura Albino, tenor Nils Brown and bass Jason Nedecky. For more information, go to http://www.aradia.ca/
The Glenn Gould School of the Royal Conservatory of Music presents a staged version of Massenet’s Cendrillon conducted by Uri Mayer with stage direction by Graham Cozzubbo, with students from the GGS Vocal Program and Opera in Concert Chorus. I once saw this show at Santa Fe Opera, in the Laurent Pelly production, and it was incredibly funny. I am sure with the youthful enthusiasm of the GGS students and the expert baton of Mayer, this will be a very good show. It opens on March 20, 7:30 pm at Koerner Hall, with additional performances on March 21, 23, and 35, at different times. For details and tickets, go to http://performance.rcmusic.ca/viewallconcerts