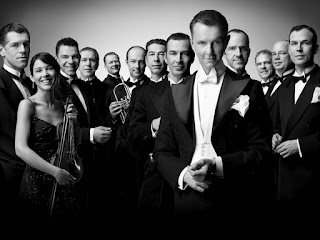 Max Raabe and the Palast Orchester come to Koerner Hall

Ever since I saw the movie Cabaret when it first came out in 1972 with Liza Minelli, Michael York and Joey Grey, I became very interested in the music and literature of Germany in the 1920’s, particularly the works of Bertolt Brecht and the composers of that period: Weill, Korngold, Schreker, Braunfels, Goldschmidt, and the like. The movie led me to read Christopher Isherwood’s Berlin Stories. The expressionist/modernist musical language was very intriguing somehow. And when Decca’s Entartete Musik series appeared in the early 1980’s, I bought almost every title, and the two Teresa Stratas LPs of Weill songs were played so much I ruined the grooves. Anyway, this week, the German singer Max Raabe, hugely popular in Europe and a specialist in the more popular (albeit a bit sanitized and definitely less gritty) aspects of this genre, is bringing his Palast Orchester back to Koerner Hall after their appearance there in 2010, Koerner’s inaugural season. They are giving two concerts, on March 8 and 9 at 8 p.m.. According to the program notes posted on the Royal Conservatory of Music website: “The uber-suave Max Raabe and his Palast Orchester are on the road … bringing the elegant high style and musical glory of the 1920s and 1930s with them, alongside songs from their fabulous new album, One Cannot Kiss Alone. Weimar-era classics sit alongside modern love songs, imbued with the same consummate mix of irony, melancholy, and wit. Blended throughout is Mr. Raabe’s effortless narrative banter and playfully imperious charm that has wooed audiences worldwide. The repertoire of the Palast Orchester encompasses more than 500 songs, including original dance band arrangements of classics by Kurt Weill, Cole Porter, and Irving Berlin, and timeless hits such as Dream a Little Dream, Over My Shoulder, and Singin’ in the Rain.” http://rcmusic.ca/
If you are interested in more cerebral and “serious” classical music, the Toronto Symphony Orchestra’s New Creations Festival is continuing for a second week, with Hungarian composer/conductor Peter Eotvos at the helm. On Wednesday Mar. 7 8 p.m. is Orion, named after a piece by Canadian Claude Vivier, whose Lonely Child was so beautifully sung by Barbara Hannigan last week. Also on the program are two pieces by Eotvos – his Cello Concerto Grosso, a TSO co-commission and a North American premiere, as well as zeroPoints. Jorg Widmann is the clarinet soloist, and Peter Oundjian as usual is the host. On Friday Mar. 9 7:30 p.m., for a complete change of pace, TSO is presenting Vivaldi’s Four Seasons, with violinist Jennifer Koh and conductor Rob Kapilow. http://tso.ca/Home.aspx
If you are looking for more new music, New Music Concerts is presenting Peter Eotvos in Peter Eotvos Picks, a concert of his own works plus works by Stravinsky and Zoltan Jeney, at the Glenn Gould Studio on March 10 and 11 at 8 p.m. http://www.cbc.ca/glenngould/2012/02/new-music-concerts-presents.html Also on March 11, Soundstreams is presenting the Stuttgart Chamber Choir with its own Soundstreams Choir 21 in a program of Bach, Ligeti, Mahler, Strauss, and a world premiere by Canadian Paul Frehner. The event takes place at the rather underused venue of the Carlu Concert Hall. http://www.soundstreams.ca/
The Takacs Quartet is visiting Koerner Hall on March 11 at 3 p.m., playing Dvorak’s Piano Quintet with guest pianist Joyce Yang. Also on the program is Schubert’s Quartettsatz and Beethoven’s String Quartet No. 14. http://rcmusic.ca/ Music Toronto is presenting pianist Richard Goode on March 6 at 8 p.m. at the Jane Mallett Theatre, its usual venue. He is playing Brahms Eight Pieces Op. 76 and Chopin’s Piano Sonata No. 3 in B Minor, Op. 58. http://music-toronto.com/
The inaugural concert of the newly launched Canadian Art Song Project will take place on March 6 at noon, at the Richard Bradshaw Amphitheatre at the Four Seasons Centre. http://coc.ca/Home.aspx A Celebration of Canadian Art Song will feature the world premiere of a newly commissioned cycle, with the very intriguing title of Sewing the Earthworm by Brian Harman, composed for soprano Carla Huhtanen. Mezzo Krisztina Szabo sings Seven “Dark Lady” Sonnets by Passmore, and Lawrence Wiliford sings Srul Irving Glick’s Two Landscapes. At the piano is CASP co-artistic director Steven Philcox. I recently interviewed Lawrence Wiliford about this project, which you can read at: http://blog.scena.org/2012/03/singing-from-heart-lawrence-wiliford.html
The University of Toronto Faculty of Music (Opera Division) is presenting the perennial favourite, Cosi fan tutte at the MacMillan Theatre on March 8, 9, 10 and 11, this last a matinee. Michael Albano directs and Miah Im is the conductor. The soloists are all students in the Opera program. http://www.music.utoronto.ca/home.htm
Finally, Opera by Request is presenting another great work, Verdi’s monumental Don Carlo, under the direction of William Shookhoff. It takes place on March 10 7:30 p.m. at the College St. United Church at 452 College Street in downtown Toronto. This is billed as its 5th anniversary gala production. http://www.operabyrequest.ca/index.htm