You are at:Home»Classical Music»Classical»This Week in Toronto (Mar. 12 – 18)
Advertisement / Publicité 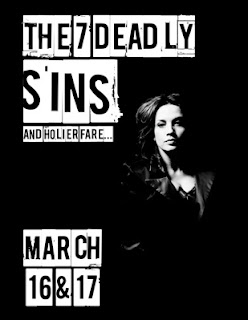 (photo: Against the Grain Theatre)

I’ve noticed over the years that there’s usually a slight dip in the number of concerts during reading week. Even the Toronto Symphony is dark. Not sure exactly why, but perhaps presenters think Canadians go south or otherwise leave town? It seems to me this week is exactly the time for recreational activities, and what better way to enjoy life than to go to a concert?

The rather unorthodox Against the Grain Theatre is presenting two evenings of Kurt Weill’s Seven Deadly Sins on March 16 and 17. It stars Lindsay Sutherland Boal, who was Musetta in ATG’s production of La boheme. The Weill shares the stage with piano works by John Adams, Steve Reich, and Benjamin Britten, for an eclectic and edgy evening of 20th century music. ATG Founder and Artistic Director Joel Ivany is the stage director, Christopher Mokrzewski is at the piano and Matjah Mrozewski is the choreographer. Performances take place at Gallery 345, at 345 Sorauren Avenue in west end of Toronto near High Park. http://againstthegraintheatre.com/index/Home.html
With the COC season over, the National Ballet of Canada has taken over the Four Seasons Centre with the staging of the perennial favourite and extremely sumptuous Sleeping Beauty. The original Nureyev production is now restaged by Karen Kain, with sets and costumes by Nicholas Georgiadis. There are daily performances from March 13 to 18. Go to the National Ballet website for casting details as principal roles are triple-cast: http://national.ballet.ca/ Coinciding with the ballet season, the COC Dance Series is presenting Ballet Express! on March 14, noon. Ballet Jorgen is presenting a program of classic and contemporary pieces at the Richard Bradshaw Amphitheatre. Admission is free but be sure to line up an hour in advance if you want a seat. http://coc.ca/Home.aspx
An interesting event is a University of Toronto Faculty of Music faculty recital given by two well known Canadian singers, soprano Monica Whicher and baritone Russell Braun. Whicher, a former student of the late Lois Marshall, possesses a silvery tone and warm stage presence; Braun of course needs no introduction as he’s one of Canada’s treasures. They are joining forces to give a recital on March 12 7:30 p.m. at Walter Hall, Edward Johnson Building of the University of Toronto Faculty of Music. The program includes American and Canadian songs by Barber, Rorem, Vivier, Greer and Beckwith. Steven Philcox, assistant professor of collaborative piano, is at the keyboard. http://www.music.utoronto.ca/events/calendar/fas0312.htm
On the subject of vocal recitals, let’s not forget the annual Greta Kraus Schubertiad under the auspices of the Aldeburgh Connection, which just had its 30th anniversary gala celebration recently. The theme this year is Schubert and the Esterhazys. Soloists are soprano Leslie Ann Bradley, mezzo Erica Huang, tenor Graham Thomson and baritone Geoffrey Sirett. Stephen Ralls and Bruce Ubukata at the piano. The concert is on March 18 2:30 p.m. at Walter Hall, the basement of Edward Johnson Building of the U of T Faculty of Music.
Canadian violist Rivka Golani is giving a recital with pianist Stephan Sylvestre. The program consists of in a program of Max Bruch’s Kol Nidre, Franz Schubert’s Arpeggione, and Edvard Grieg’s Sonata Op. 36 in A minor for viola and piano. The recital is at Gallery 345, 345 Sorauren Avenue on March 13 8 p.m. http://www.lesamisconcerts.org/