You are at:Home»Classical Music»Vocal»Opera»This Week in Toronto (June 4 – 10)
Advertisement / Publicité 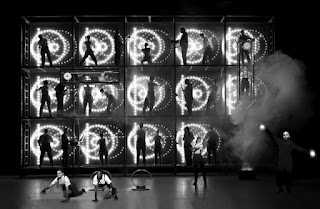 A production photo of Einstein On The Beach by Philip Glass (composer), Robert Wilson (stage director) and Lucinda Childs (choreographer), the operatic centerpiece of Luminato 6

The big news in Toronto this week is that Luminato Festival of Art and Creativity is once again upon us.  This is the sixth year of the Festival, and it runs from June 8 to 17. Since its first event in June 2007, Luminato has grown into an internationally recognized annual arts festival that specializes in the new, innovative, sometimes controversial but always interesting cutting edge events. In its relatively short history, it has already commissioned over 50 works and has featured 6,500 artists from over 35 countries. Its broad scope includes events from Theatre, Music, Opera, Dance, Visual Arts, Literature, Magic, Food etc.   For music fans, Luminato 6 is particularly exciting, because it is presenting the North American premiere of Philip Glass‘ Einstein On The Beach, directed by Robert Wilson with choreography by Lucinda Childs.  This opera has never been produced in North America (outside New York City) for a variety of reasons – first of all, its length of almost four and a half hours is a daunting challenge in itself. Three shows – Friday and Saturday at 6 p.m. and Sunday at 3 p.m. at the Sony Centre. There will be a talk on the opera given by Luminato’s new Artistic Director Jorn Weisbrodt in the lower lobby of the Sony Centre an hour before each show.   Other significant classical music event of the Festival is pianist Stewart Goodyear‘s Beethoven Marathon.  He is attempting to play all 32 of the Beethoven Sonatas – over 10 hours of music! – in one day.  Obviously this cannot be done in one sitting, as nobody has a superhuman bladder.  Goodyear will split it into three recitals to take place morning, afternoon and evening.  The concerts take place in Koerner Hall on June 9.  Another interesting musical event is the world premiere of Laura’s Cow, a children’s opera. It’s presented by Canadian Children’s Opera Company, and it tells the story of Laura Secord who, upon overhearing that the Americans were going to stage a surprise attack on the Canadian forces during the war of 1812, trekked through enemy territory to warn the British garrison.  She disguised her journey’s true intent by travelling with her cow. The opera is composed by Errol Gay and the libretto by Michael Albano. Guest artists include baritones John Fanning and Andrew Love. All performances at the Enwave Theatre in Harbourfront. Previews on June 6 and 7, with regular performances on June 8, 9, and 10. Luminato is partnering with the Toronto Symphony Orchestra to present Late Night: Shostakovich Symphony 11, a single performance to start at 10:30 p.m. at Roy Thomson Hall. Peter Oundjian conducts this most incandescent of Shostakovich symphonies. There will be a party with live band in the lobby after the performance.  For details on these and other shows, visit www.luminato.com

In addition to the Shostakovich Late Night show, the Toronto Symphony Orchestra is also giving two other performances of Shostakovich, paired with the Schumann Piano Concerto in A Minor, Op. 54 with pianist Jonathan Biss. Performances on Wednesday June 6 and Thursday June 8 at 8 p.m. in Roy Thomson Hall.  Peter Oundjian conducts. http://tso.ca/Home.aspx