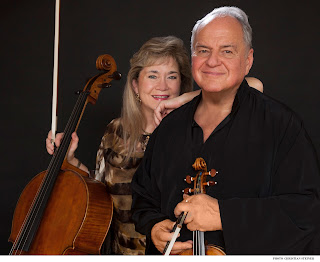 Cellist Sharon Robinson and violinist Jaime Laredo (Photo: Christian Steiner)
With the Pan Am Games getting ever closer, it seems that “American Programming” is front and center everywhere in town. The Toronto Symphony Orchestra is bringing us All American, a program of American classics old and new, from Gershwin’s An American in Paris, to John Adams’ scintillating Short Ride in a Fast Machine, a piece that I seem to recall hearing at the New Creations Festival a couple of years back.  It’s one of Adams’ most popular pieces. Special guests on this occasion are the Bolivian-born American violinist Jaime Laredo and his second wife American cellist Sharon Robinson. Together they make up two of the three members of the Kalichstein-Laredo-Robinson Trio. Laredo and Robinson will play the Canadian premiere of the Double Concerto for Violin and Cello by Andre Previn. Also on the program is the Symphony No. 1 by Samuel Barber. Three performances – June 4th at 2 pm, June 6th at 7:30 pm, and June 7th at 3 pm, the first two shows at Roy Thomson Hall and the last, matinee show at the George Weston Recital Hall in North York.  Peter Oundjian conducts.  http://tso.ca/en-ca/concerts-and-tickets/2014-2015-Season/EventDetails/All-American.aspx 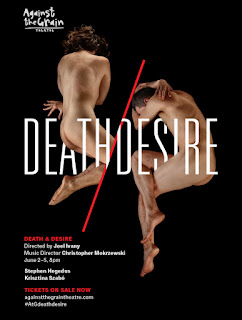 Poster for AtG’s Death and Desire

The cutting edge Against the Grain Theatre is known for never doing anything mundane or obvious, but even they may have outdone themselves this time, with Death and Desire, a show that combines Schubert’s Die schone Mullerin with Olivier Messiaen’s Harawi. If this sounds audacious, it’s because it is, but most likely AtG can pull it off, like their previous shows! I was not able to attend the sneak preview at the RBA noon hour recital a couple of weeks back, so I am looking forward to experiencing it on opening night June 2.  Additional performances on June 3, 4, and 5, all at 8 pm at the Neubacher Shor Contemporary Gallery, a venue unfamiliar to me. The address is 5 Brock Avenue in west side of Toronto, off Queen St. West between Dufferin and Lansdowne. The soloists are mezzo Krisztina Szabo and bass-baritone Stephen Hegedus. Christopher Mokrzewski is at the piano and Joel Ivany directs.   http://www.againstthegraintheatre.com/shows/deathanddesire 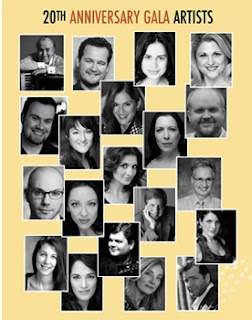 Artists at the 20th Anniversary Gala (Photo: www.offcentremusic.com)
This year marks the 20th anniversary of Off Centre Music Salon, To celebrate, there’s a gala concert this coming Sunday, June 7 2 pm at its usual venue of Glenn Gould Studio. There’s a huge list of artists announced, including Russell Braun, Krisztina Szabo, Nathalie Paulin, Joni Henson, Isabel Bayrakdarian, Carolyn Maule, Lauren Segal, James Westman, Norine Burgess, Monica Whicher, and of course Boris Zarankin and Inna Perkis. David Goldbloom is the MC. This will be an exciting and glittery event and a must attend event for supporters of Off Centre. http://offcentremusic.com/concerts.html 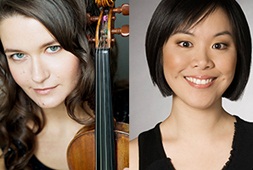 Violinist Veronique Mathieu and pianist Stephanie Chua
Now that the COC season is over and the singers have sung their last songs at the noon hour concerts, there are still other interesting programs to be seen and heard at the Richard Bradshaw Amphitheatre, Four Seasons Centre.  One that caught my eye this week is In Praise of Women: Music for Violin and Piano. Violinist Veronique Mathieu and pianist Stephanie Chua are giving a recital of works by women composers – Elizabeth Jacquet de la Guerre, Clara Schumann, Maria Molinari, Heather Schmidt, Ingrid Stolzel and Grazyna Bacewiz. I have to admit other than Schumann, the other names are new to me. For more information click on – http://www.coc.ca/PerformancesAndTickets/FreeConcertSeries/June.aspx
Here is a link to the program – http://files.coc.ca/pdfs/concert150602.pdf