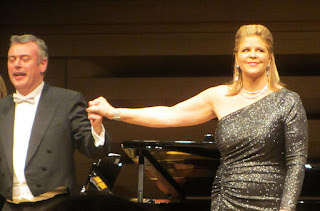 Susan Graham Recital Combines Artistry with Star Power
by Joseph So
Sunday Jan. 28, 2012 at 8 p.m.
Koerner Hall, RCM, Toronto
********************
Purcell: Tell Me, Some Pitying Angel
Berlioz: La mort d’Ophelie
“Mignon Songs”
Schubert: Heiss mich nicht reden
Schumann: So lasst mich scheinen, bis ich werde
Liszt: Kennst du das Land
Tchaikovsky: Nyet tolka tot kto znal
Duparc: Romance de Mignon
Wolf: Kennst du das Land
Horovitz: Lady Macbeth
Poulenc: Fiancailles pour rire
American Songs (announced from the stage)
Messager: J’ai deux amants
Porter: The physician
Duke: Ages Ago
Moore: Sexy Lady
Encores:
Reynaldo Hahn: A Chloris
Stephen Sondheim: The Boy From
*********************
One of the highlights of the fall opera season was the appearance of American mezzo Susan Graham in the title role of Iphigenie en Tauride. Of course that wasn’t the first time she sang in Toronto, as I recall her recital of American Songs (mostly Ned Rorem songs) in the Roy Thomson now-defunct Vocal Series a dozen years ago, as well as a date with the Toronto Symphony in Les nuit d’ete. But it took an operatic star turn to capture the imagination of Toronto voice fans. Simply put, Susan Graham is the complete package, a consummate artist of extraordinary gifts, a combination of gleaming vocalism, stunning technique, musical intelligence, communicative power, and stage allure. How often does a singer get a song written for her called “Sexy Lady” and actually living up to every word of the text?
On a blustery Saturday evening of high winds, slippery sidewalks, fender benders and road closures, Koerner was packed, a testament to Graham’s drawing power. She didn’t disappoint her fans one bit. In terrific voice, Graham took no time to warm up, singing the Purcell with lovely tone and clear diction. (For some reason, the second Purcell song, Mad Bess, was omitted) This was followed by Death of Ophelia by Berlioz. The French repertoire is Graham’s forte – she’s rare among American singers in her facility with the French language, which she speaks fluently and accent-free. Her care and attention to textual nuance was exemplary. The next six songs, all based on Goethe’s text, was sung as a group loosely labeled as “Mignon Songs.” It was good to hear “Kennst du das Land” by both Liszt and Wolf, the latter to many ears – mine included – the superior song. Graham sang these so exquisitely that there was spontaneous applause, quickly (and good-naturedly) shushed by the diva herself. Martineau, a collaborative pianist of the first rank, played the Wolf even more magnificently than usual, with stunning pianistic flourish and ample dramatic power.
The second half was made up entirely of American songs, with a combination of art songs and the more lighthearted “pop” repertoire. In the hands of Graham, the extended scena “Lady Macbeth” by Joseph Horovitz became a veritable tour de force as powerful as Verdi’s. After this deadly serious piece, Graham switched gears into more fun stuff. With songs by Messager, Porter and Duke, and given her charmingly earthy stage persona, Graham had the audience eating out of her hand. Her final piece on the regular program, “Sexy Lady” – an autobiographical song written for her by Ben Moore, was a self-effacingly funny piece that defies description. By then, the audience didn’t want to let her go. She rewarded “a perfect audience” with two encores – the exquisite A Chloris by Reynaldo Hahn which she called her favourite song, and Stephen Sondheim’s The Boy From… I am sure the audience would agree that this concert was well worth the price of braving the elements on a winter’s night.