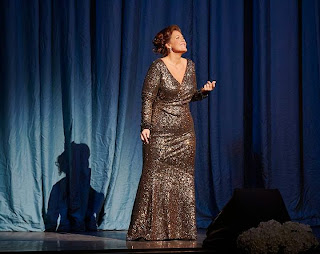 Soprano Karine Boucher (Photo: Michael Cooper)
One of the pleasures of attending the Canadian Opera Company’s performances is the opportunity to discover the singers of the future, through its venerable 30-year old Canadian Ensemble Studio program. Created by the late COC General Director Lotfi Mansouri, the Ensemble Studio is the best known of all young opera singers’ training programs in Canada. It has nurtured the development of many a Canadian artist over the last three decades, among them the world renowned heldentenor Ben Heppner, who was a member way back in the early years of the Ensemble Studio. 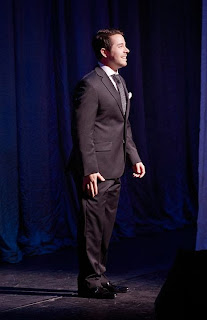 Tenor Jean-Philippe Fortier-Lazure (Photo: Michael Cooper)
Given the degree of interest in the program from the opera public in recent years, the COC has established a competition to attract talented candidates, to raise the public profile of the Ensemble Studio, and to raise funds to support this worthwhile initiative. This competition began modestly two years ago, as an event that took place in the Richard Bradshaw Amphitheatre, with piano accompaniment. The competition this year has “graduated” into the Fraser Elliott Hall (the main auditorium) itself, with full orchestra under the baton of Johannes Debus.  Re-branded Centre Stage, it is now a “gala fund-raiser” with the opportunity of a post-competition dinner on the stage of the opera house for a tariff of $1500.  For those who just want to attend the competition, the tickets are priced at $100 which includes a pre-competition reception in the lobby. 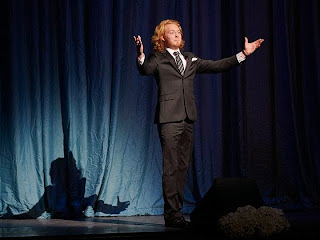 Bass-baritone Iain MacNeil (Photo: Michael Cooper)
The nine Canadian finalists were chosen through a series of auditions in Canada and the U.S. They were in town for a week of coaching and preparation. A few of them, such as soprano Karine Boucher and Jean-Michel Richer, had previously appeared at the Richard Bradshaw Amphitheatre in a noon hour joint recital between the COC Ensemble and the OdeM Atelier lyrique.  But the majority of voices were new to Toronto area audiences. At a “private audition” that took place earlier in the day, each finalist sang one selection of their own choice. Then at the public section of the competition, each sang an additional aria chosen by the COC jury panel (General Director Alexander Neef, Artistic Administrator Roberto Mauro, Music Administrator Sandra Gavinchuk, Head of the Ensemble Studio Liz Upchurch, and COC Ensemble Alumna/Canadian soprano Wendy Nielsen).  I had the good fortune of being invited to the earlier private session, which allowed me to get a better idea of the voices. 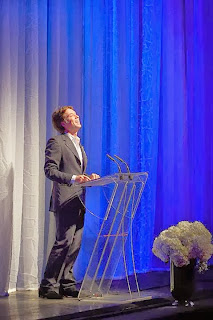 Host Rufus Wainwright (Photo: Michael Cooper)
As competitions go, this one is relatively short, with two arias from each candidate, and only one is performed in front of the public.  Compare this to the Montreal International Music Competition (Voice) which involves a semi-finals round and a more diverse repertoire of song/lieder, oratorio, as well as opera arias, not to mention the requirement that each candidate must sing an “imposed piece” by a Canadian composer, commissioned for the occasion. The COC competition focuses only on a singer’s ability to sing opera, which is only one facet of the art of a classical singer. After the competition ended last evening, I came away with the feeling that the public part of the program was really too short and lacked sufficient content.  I understand the need to have the event wrapped up early enough for the patrons to have an on-stage dinner, but surely a solution could (and should) be found? 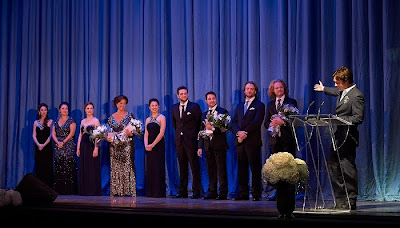 Soprano Lara Secord-Haid opened the proceedings of both the private and public sessions. She has an attractive stage presence to go with her nice voice, but perhaps it was nerves given she was the first one up, her Blondchen’s aria from Enthfuhrung suffered from wandering pitch and shaky support in the lowest notes, despite bright, attractive tone.  Her second piece, Oscar’s perky “Saper vorreste” from Ballo, went much better, and her vivacious personality shown through.  Mezzo Francesca Corrado was next up with Isabella’s aria from L’Italiana in Algeri.  Corrado has a low mezzo of impressive size and quality. On this occasion, her “Cruda sorte” was a bit heavy, with some awkward fioritura not helped by her pronounced vibrato, and a bit short on sparkle in the acting department. Her second piece, the Card Scene from Act 3 Carmen, which is all serious business, was well done, complete with a fiery chest voice. Hers is a low mezzo bordering on contralto, and the tone is suited to Italian opera – I can imagine in maturity she would make a fine Azucena, Ulrica, and Principessa di Bouillon. 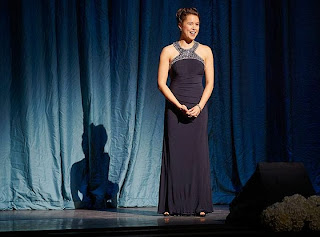 Jean-Michel Richer was one of two tenors in the competition. He has good stage presence, and possesses a beautiful lyric sound. He sang “Questa o quella” with very nice tone and dramatic flair. It’s too bad the piece lasts barely two minutes – in my mind, it would be better to choose something a bit more substantial!  His second aria, Ottavio’s “Il mio tesoro” really tests the mettle of the Mozart tenor. He sang it with musicality and ingratiating tone, even with added appoggiaturas. However, his singing was a little short of accuracy in the many coloratura runs.  The potential of this singer is obvious, and with further study, he will be a very fine tenor.  Mezzo Rachel Wood sang Dorabella’s aria from Cosi.  Hers is a high mezzo of attractive tone with plenty of thrust, and she sang it well save for a few moments of pitch issues. Her second piece, Octavian’s “Wie du warst” was very lovely, a piece well suited to her high mezzo. 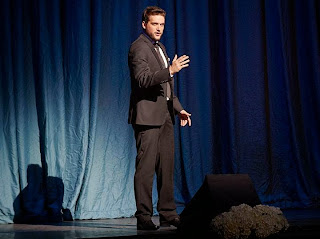 PEI bass-baritone Nathan Keoughan contributed Colline’s “Vecchia Zimarra” with attractive, firm tone, although once again such a short piece doesn’t really show off the voice sufficiently in competition. His second piece, “Non piu andrai” was more substantial and he sang it very well.  Soprano Karine Boucher sang Marietta’s Lied from Die Tote Stadt as her first selection. I recall hearing her sing this very piece when she was here in the joint COC Ensemble/OdeM Atelier lyrique noon hour recital some months ago. Hers is a rich, full lyric voice of quality and volume, the kind of voice that is always in short supply. Her Korngold was lovely, with her rich tone just perfect in this music, although one would have liked a more developed high piano that is absolutely essential in this piece.  Her Piangero from Giulio Cesare was a curious choice. Her opulent soprano with its rich timbre is stylistically not really a Baroque voice. Her performance, while beautiful, suffered from some flatness at the top and the line was not as pure as could be. Still, as I had noted before in my review of the previous concert, Boucher has an impressive instrument and she has the stately look of a mature artist on stage. She would be a fine Contessa in Nozze, for example.

Tenor Jean-Philippe Fortier-Lazure possesses a beautiful tenore di grazia which he uses elegantly and musically. His “Vainement” from Le roi d’Ys was gorgeous, arguably the best singing in the private session.  His “Quanto e bella” from L’Elisir was also lovely, but he suffered from two small blemishes in the last line of the aria, which just goes to show how treacherous singing really is! But overall, his performance was impressive. Mezzo Emma Char has a high mezzo of fresh, focused tone and lovely stage presence.  She sang two “trouser arias” – “Voi che sapete” and “Parto, parto.” She would make a very believable Cherubino and Sesto in my opinion.   She sang the first aria very well, and her second aria could have better accuracy in the coloratura runs, but overall it was a very enjoyable performance.  The last competitor of both sessions was Brockville bass-baritone Iain MacNeil.  With his strapping presence and flowing hair, he bears a strong resemblance to former COC Ensemble bass-baritone Philippe Sly. He sang both Guglielmo’s aria and Figaro’s aria with firm and masculine tone, and he acted well – a very promising singer.

The jury panel then left their seats to deliberate in private, while host Rufus Wainwright entertained the audience with his endearing if slightly quirky style. He even sang three numbers, including an aria from his opera, Prima Donna, which I saw at Luminato three years ago.  After about 20 minutes or so, COC General Director Alexander Neef returned to announce the results. Third Prize of $1500 went to bass-baritone Iain MacNeil; Second Prize of $3000 went to tenor Jean-Philippe Fortier-Lazure, and Quebec soprano Karine Boucher was named the winner of $5000 First Prize as well as the Audience Prize.  All three were deserving winners, although I must say I wished there were more prizes as some of the others were worthy of being in the winners’ circle as well.  But of course, the ultimate prize is a career, which all these singers are capable of.  It depends on lots of hard work, determination, and a certain degree of luck.  I wish all of them well. 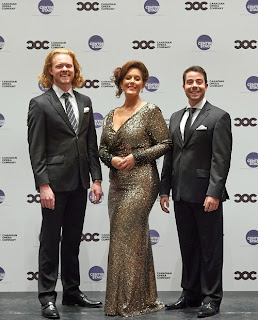