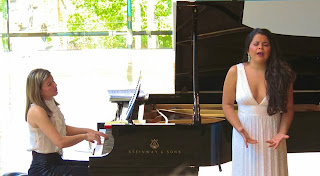 Simone Osborne and Anne Larlee at the Richard Bradshaw Amphitheatre (Photo: Vanessa Goymour)
Vancouver soprano Simone Osborne burst onto the opera scene in 2008 when she became at 21 one of the youngest winners of the Metropolitan Opera National Council Auditions – in fact, the youngest since another Canadian, soprano Teresa Stratas won it back in 1959.  That same year Osborne also won the Marilyn Horne Foundation Competition at the Musical Academy of the West.  I vividly recall interviewing the soprano for an article in La Scena Musicale at the time. Even at the young age of 21, she showed a maturity that belies her years. One was impressed by the way she handled herself and fielded the many questions from the press.  In the intervening five years, Osborne has gone a long way to fulfill the promise of a significant career.  So far, I’ve seen her in most of her roles – Pamina, Juliette, Ilia, Lauretta, Musetta, plus some recitals. (Sadly I missed her Hamilton Gilda but hopefully she’ll sing it again.) Beautiful voice? For sure, with a lovely gleam to her tone. Musicality?  No doubt one of the most musically intelligent young singers around. Stage presence?  Well, with her trademark million-dollar smile and charming personality, Simone has stage presence to burn, as they say. Among her many qualities is a sincerity, an involvement, and a real connection to the material in her music-making that makes her stand out as someone special.
Now having graduated from the COC Ensemble, Osborne has remained a favourite of Toronto audiences. Luckily she has regularly returned for mainstage shows.  This season she was heard as Musetta in the just completed La boheme and will sing her first Oscar in Un ballo in maschera in the winter season.  She is currently on tour in Ontario and Quebec under the auspices of Jeunesses Musicales, in a recital celebrating the late, great Canadian contralto Maureen Forrester. Osborne was the first recipient of the Maureen Forrester Award, so this is a most fitting tribute. JM tours go all over the province but I don’t recall it coming to Toronto before, so this is a special occasion. The Richard Bradshaw Amphitheatre was absolutely packed, even more than usual given Osborne’s high profile.
The centerpiece was Schumann’s Frauenliebe und Leben, a cycle of eight songs that was the composer’s gift to Clara Schumann – and really his gift to all the women classical singers.  I don’t have a scientific study to back me up, but I am willing to bet that the vast majority of women going through vocal programs have at one time encountered this cycle. I recalled interviewing retired soprano Edith Wiens in Munich a few years ago and she told me that when she first learned this cycle, she was so moved by what happens to this character that she sobbed her way through it! Well, even though Simone is not married and has not given birth, you can tell the cycle resonates with her. I love her connection with the text, and her facial expressions illustrated vividly the changes of mood through the cycle from first love, marriage, childbirth, and finally the loss of her beloved. The recapitulation in the piano in the final song, and the sad and wistful look on Osborne’s face really moved me. The singer mentioned when she was 16 and working at Dairy Queen, she spent her own money to buy Maureen Forrester’s autobiography – well, as you can imagine that brought guffaws from the audience!  The singer also mentioned that she found Maureen’s Frauenliebe on Youtube and enjoyed it.  Well, I think Forrester herself would have enjoyed Simone’s performance today.
Another very striking part of the program was the Toronto premiere of two songs by Canadian composer Brian Current, specially commissioned by Canadian Art Song Project and Jeunesses Musicales for this tour. The songs were composed with Osborne in mind. What can one say about the first song, Extreme Positions, except that the title is very apt! The vocal writing epitomizes the adjective “extreme” – in tempo, range, and the amount of text involved!  Too bad the text was not printed in the program; I will need to read it to find out more. The second song is less radical but just as striking, and taxing the singer’s technique. These two songs sure make a dramatic statement, and Osborne sounded totally comfortable in them, ably supported by Anne Larlee at the piano. Larlee proved a worthy partner in her rock-solid support throughout this very long program. 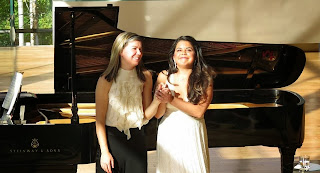 Simone Osborne and Anne Larlee receiving audience applause (Photo: Vanessa Goymour)
Reynaldo Hahn’s songs are known for their sensual beauty and the perfumed atmosphere created with each piece. After the wildness of the Current songs, it was a bit difficult for the audience to refocus on the stately, very classical A Chloris. This was followed by one of my favourite songs, L’Enamouree. For me, the gold standard is Victoria de los Angeles, in her recital on Angel Records. Osborne’s warm and gleaming tone was heard to advantage here. But for me, the best was the Strauss group of Die Nacht, Zueignung, and Cacilie. I particularly loved the ecstatic quality Osborne brought to the last two, with a heart-felt quality very much in evidence.  Despite such a generous program, Osborne and Larlee gave an encore, Beautiful Dreamer by Stephen Foster.  I would venture a guess that Osborne was inspired to sing this by her mentor Marilyn Horne who often closed her recitals with this lovely song. Osborne sang it exquisitely, with a surfeit of lovely tone and feminine warmth that was very moving. And I must mention that she thoughtfully turned to the back and side to sing a few phrases directly to those audiences – a lovely gesture. If you missed this recital, be sure to catch her singing this program during the tour. The duo next appears in Trois-Rivieres PQ on Nov. 17.  If this is a bit too far, try Midland ON on Nov. 21.
http://www.jmcanada.ca/en/main_nav/concerts/general-public/desjardins-concerts/2013-2014-season/simone-osborne/