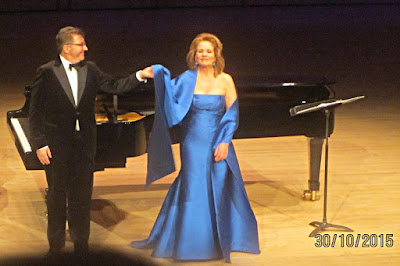 To be sure, Prima Donna, Diva, Superstar are such overused labels today, especially with “Diva” having been usurped by non-opera folks to call almost any woman in pop, young or old – pace pop culture mavens! To me, a diva has to have had a few miles on her, having earned her stripes and have the goods – and battle scars – to show for. Renee Fleming is just such an artist, an authentic, genuine, bona fide, card-carrying Prima Donna, Diva, and Superstar.  Did I put enough adjectives in there?

Since her win in the Metropolitan Opera Auditions, Fleming shot to fame very quickly, and in no time she became an authentic America’s sweetheart, at least for those who follow classical music. Even her publicity material uses the label “People’s Diva.”  I first heard her over the airwaves of the broadcast of the 1988 Met Auditions, the same year that Ben Heppner won. Her voice was incredibly beautiful, with uncommon warmth and an exquisite gleam to her sound. Then I saw her on stage, as the Contessa in Le nozze di Figaro, in of all places, Opera Hamilton!  It was around the time she had her daughter, and wasn’t quite the glamorous star she became in a mere couple of years later.  By the time I saw her Susannah and Desdemona and Arabella and Rusalka, she had morphed into an extremely glamorous (but in a very endearing sort of way) superstar. The voice was absolutely pristine.  It was only within the past couple of seasons that there were a few naysayers towards her singing. But I’ve never heard her sing poorly, to be honest. Only now, she needs to push her chest voice a bit more to be heard, and her B-naturals and anything above have a bit less gleam and sound a little harder. Still, we are talking a voice in excellent shape after 25+ years.

I last heard her in opera as the Countess Madeleine in Capriccio at the Semperoper Dresden almost exactly a year ago. She was supposed to sing Arabella, but withdrew and replaced by Anja Harteros. Thankfully Fleming kept her dates with Madeleine and it was wonderful. The production was gorgeous and not crazy like so many European opera stagings can be these days. On that November evening I saw her, she recalled the Fleming of yore, with that customary gleam. Her Madeleine was wistful, aristocratic, evocative and altogether endearing. Just a week or so ago, I read in the November Opera (UK) that she’s now phasing out her opera career to focus on recitals and concerts. She has even taken a stab at Broadway, although not altogether successfully. Based on the recital last evening at Roy Thomson Hall, she still has many more songs in her yet, thank you very much. 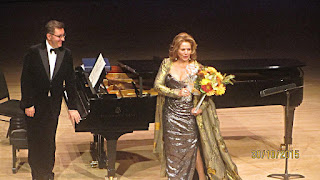 Renee Fleming given a standing ovation from the enthusiastic audience (Photo: Joseph So)

The program was really a gem for song lovers – all chestnuts, with the exception of the last group, songs by Patricia Barber. She started off with Schumann’s Frauenliebe und leben, a piece almost every woman classical singer tackled at some point in the career. Fleming surprisingly used the score, and stealing glances at it throughout.  She started tentatively, pecking at the notes and generally not singing with full volume. Maybe there were a bit of early jitters – she had a memory lapse more than once during the cycle. Thankfully Gerald Martin Moore was the ever supportive and alert pianist so probably few in the audience noticed!  By the Rachmaninoff, Fleming hit her stride and sang with her customary, gorgeous silvery tone, her excellent sense of pitch, smooth, even tone, and dynamic shading very much in evidence. “Ne poy, krasavitsa” was sung with the proper pathos, while “Vesenniye vodi” – my desert island Rach piece – was given the proper level of ecstasy – Brava!

The second half began with three Strauss songs, all very familiar ones of course. Her voice has the ideal timbre for Strauss and she did not disappoint. To my ears, she would have sung the songs with perhaps a fuller volume in the past.  Now, there’s a bit of caution in her delivery at times. She seems to husband her resources a bit, only letting it rip on occasion, and when she does, the volume remains impressive. This was particularly true in the Schumann, but her Rachmaninoff was free and easy to my ears.  Her Allerseelen was a bit cautious again, for some reason, taken at a very slow tempo.

The Canteloube was abridged but very well chosen, with the three most beautiful and showy songs from the cycle – who doesn’t like Bailero?  Her slow tempo gave it an appropriately languid quality, so appealing in this song. She spoke – with microphone – to the audience to introduce the Schumann, Canteloube and Patricia Barber,  I have to admit I knew nothing about Barber – had to google her and discovered she’s a jazz singer. Fleming told the audience that this was only the second time she had performed these. Given Fleming’s jazz roots – I recall reading long ago that she sang in jazz clubs to support her voice studies at the Eastman school as a young woman – her affinity to this genre is very much in evidence. These are melodically inspired, very characterful and totally accessible, a pleasure to hear. The audience responded warmly to these songs, indeed to the whole program. 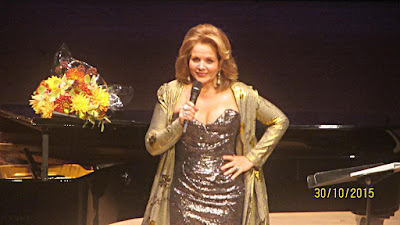 After the opening Schumann cycle, Fleming sang with her customary poise, choosing very slow tempi for the songs, showing off her exemplary legato and breath-line, holding onto high notes sometimes perhaps a bit too long. But hey, that’s what make her a diva, right? This was particularly true for her encores – Io son l’umile ancella and Marietta’s Lied. I wish I had a timer – it sounded almost twice as long as usual! The response from the audience was ecstatic – it’s been a long time since I’ve heard ovations for a song recital in Toronto approaching this level of frenzy.  Maybe we have to go back to Luciano Pavarotti at Massey Hall when he sang 7 (or was it 9?) encores.  Or Leontyne Prices sing the Death of Butterfly – and acting it out, again as an encore!  Those were moments indelibly etched in my memory bank. This Fleming recital may well take up a spot in that old cerebral hard drive of mine. I hope you were there, as it was an early highlight of the 2015-16 vocal season.