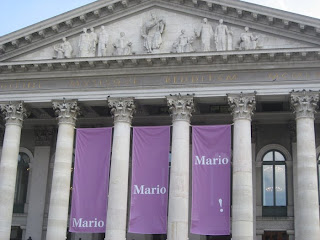 Mario! Mario! Mario! The three huge banners hanging between the Grecian columns said it all. Puccini’s great opera may be called Tosca, but it is as much about Cavaradossi as it’s about the Roman prima donna. A great tenor demands equal billing. The Munich Opera certainly has a great Cavaradossi in its native son tenor Jonas Kaufmann. Without a doubt, Kaufmann is the hottest spinto tenor in front of the public today. His ability to excel in German, Italian and French repertoires is remarkable. In this production of Tosca, Kaufmann and the Finnish diva Karita Mattila (Tosca), aided and abetted by Finnish baritone Juha Uusitalo at his sadistic best as Scarpia, generated so much heat that these three figuratively burned up the stage last night. The performance began a little slowly but built to a shattering climax. Kaufmann was in great voice; singing his two arias splendidly, with impeccable Italianate tone and nuanced acting. His full throttled Act 2 cries of “Vittoria, vittoria” was the most exciting I’ve ever heard. However he did make a small mental error in “Recondita armonia”, entering too soon in the second phrase. Other than a few minor blemishes, it was a performance to remember. Mattila’s Tosca was human, emotional, extroverted, genuine, and earthy. The voice with its cool timbre might not be ideal in Italian opera, but she makes it work by throwing herself totally into the role. Her chest register has grown with maturity, and she used it last night with abandon. Occasionally it sounded a bit rough and the break between chest and head voices was noticeable, but it suited the verismo style. Her five high Cs were searingly produced, and her “Vissi d’arte” was heart-felt. Uusitalo’s Scarpia is rather unsubtle, and there isn’t much suave and seductive quality to his voice or his acting – this Scarpia is a psychopath through and through. In Act 2, the performance caught fire and the confrontation scene between the principals were truly exciting.

A lot – mostly negative – things has already been written about Luc Bondy’s production. Having seen it in New York and now here, I am puzzled as to why the Met audience hated the production so much. Yes, it is gloomy; and no, it isn’t pretty like the Zeffirelli production it replaced, but then Tosca is not exactly a pretty story, is it?! There were also objections to the gratuitous sex in act 2 with the additions of three non-singing roles as Scarpia’s playthings; and I’ve even heard objections to the demonstrably sexual interactions of the lovers, citing that in the Napoleonic era in the 18th century, this wouldn’t have happened. But isn’t sex the driving force of this story? Why not show it -after all this is the 21st century and this is a verismo opera! More problematic for me are some aspects of the staging, as in the end of act 2. No, I don’t mean the business with the crucifix and the candelabras, but having Tosca sitting on the sofa fanning herself? Huh? Wouldn’t it make more sense to have Tosca get out of there as soon as possible instead of lounging around? Also problematic is the ending of act 3, with a dummy jumping instead of Tosca. But in my mind, none of these are sufficient enough for the booing at the Met. There were boos last night too, but it was reserved for conductor Marco Armiliato, replacing Fabio Luisi who conducted the earlier performances. Yes, the tempo in act 3 was a bit too leisurely, but Armiliato offered sympathetic support to the singers, and the sounds coming out of the pit was fine. A bit taken aback, Armiliato took the boos in stride, at one point even smiling to the audience and shrugged his shoulders. What stayed with me long after the show was the energy and passion in this performance – no it wasn’t perfect, but it was memorable.