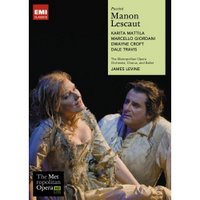 This Manon Lescaut is Puccini at his verismo best. If you are a tenor fan, you’ll love Des Grieux’s four arias and the extended Art Two duet. But the centerpiece here is the great Karita Mattila as Manon Lescaut. A great Eva, Elsa, Jenufa, Katya, Elisabetta, Lisa, Tatyana, Arabella, Salome, and Leonore, Mattila is not an ideal Puccini singer, since her Nordic sound with its cool timbre and relatively “straight tone” is not suited to the “blood and guts” verismo genre. But she is quite wonderful here. Partnering her is Italian tenor Marcello Giordani as Des Grieux. Baritone Dwayne Croft is the callous brother Lescaut and character baritone Dale Travis is Geronte. This quarter-century-old production looks handsome if rather old fashioned. Large gestures in the theatre enable those sitting in the gallery to see what’s going on and heavy make-up prevents the singers’ faces from looking washed out. However, such exaggerated acting and heavy make-up have been toned down for the telecast. At 47, Mattila still looks youthful, but there is no point in pretending that she is the embodiment of the teenage Manon, especially when closeups are so unforgiving. Her two high Cs and loads of Bs are thrilling; less attractive are her weak middle and lower registers. Her Manon is dramatically nuanced, vulnerable and sympathetic. As Des Grieux, Giordani sings with a secure top and is suitably ardent, but he looks a bit mature. Act One is always a bit slow, but by the last two acts, Mattila and Giordani burn up the stage. American baritone Dwyane Croft is good if a little anonymous in the rather thankless role of Lescaut. Dale Travis is excellent as Geronte. Not exactly a Puccini conductor, James Levine surprises everyone with his passionate and involved conducting in an opera he has not touched in twenty years, drawing torrents of sound from the orchestra at the climaxes. Perhaps not a Manon Lescaut for the ages, but overall a satisfying performance.
– Joseph K. So