Paolo Fazioli Dedicates Special Fazioli Grand at Toronto Shangri-la Hotel
Friday April 5th 2013, Shangri-La Hotel, Toronto
by Joseph So
When it comes to legendary piano brands, the most fable makes are the oldest ones – Steinway, Boesendorfer, and Bechstein. These names all have a long, long history – Steinway dates back to 1853, same year as Bechstein, and Boesendorfer goes back even farther, to 1828!  Then there’s the Italian piano brand of Fazioli. It was found in 1981, which makes it only 32 years old, a baby in piano history terms. Yet in a short time it has shot to the pinnacle, becoming a brand as fabled as the others, a favourite of many classical pianists. Some of the best known Canadian pianists – Angela Hewitt, Louis Lortie and Marc-Andre Hamelin – have all played on Fazioli pianos in their recitals. Hewitt is quoted as saying the Fazioli is “a very creative piano, it really lets you (do) all that your imagination wants to do. It has a huge range of colours, from the most powerful sounds to the most delicate sounds – which are all produced with great ease. It is my most precious possession!” Stephen Hough calls it “an instrument of rare distinction.” Russian Daniil Trifonov, one of the most stunningly gifted young pianist (who incidentally will play a recital at Koerner Hall on April 14) says: “Playing the Fazioli….has been one of my life’s most wonderful experiences.”
The Fazioli piano making process is meticulous – everything is handcrafted and only 110 pianos are produced a year. Paolo Fazioli is in charge of the family business and he was in town yesterday to dedicate a one of a kind Fazioli custom made for the Toronto Shangri-La Hotel. This $300,000 Fazioli is finished in light oak and matches the decor of the Shangri-La lobby beautifully. With the permission of fabled Canadian songwriter Joni Mitchell (who incidentally will be honoured at this year’s Luminato Festival in a huge tribute in June), her song, “My Old Man” is engraved on the piano lid, with the sheet music embroidered on the piano cover.  Yesterday afternoon, at a media event, Vancouver-based 6 year old Isabelle Wang performed on the piano for the media.  Ms. Wang is scheduled to play at Carnegie Hall later this month – wow, the mind boggles!
Ms. Kerry Connolly, media director of the Toronto Shangri-La, kicked off the proceedings by welcoming everyone, followed by Manuel Bernaschek, speaking on behalf of Fazioli pianos and he introduced Mr. Fazioli, who proceeded to sign the piano, which was then played by Isabelle Wang and Aisa Sayama. It was also announced that Remenyi House of Music will be carrying the Fazioli piano for the Toronto market.  Lovely piano, great sound, delicious prosecco and sumptuous pastries in beautiful surroundings – what a delightful way to spend a Friday afternoon! 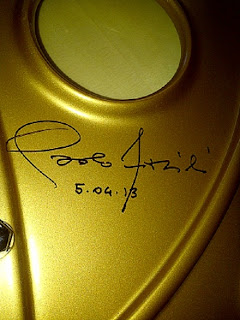 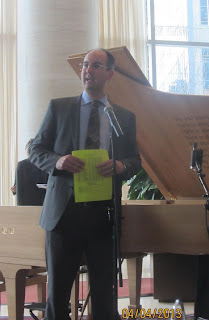 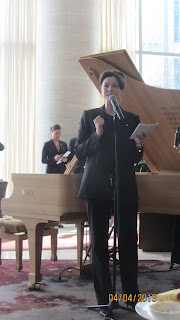 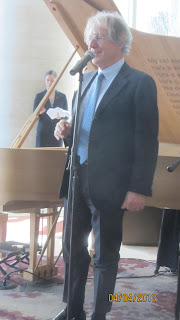 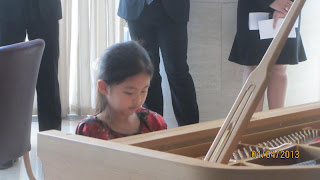 (l. left and below) 6 year old Isabelle Wang entertains the guests with her marvelous playing. (Photo: Joseph So) 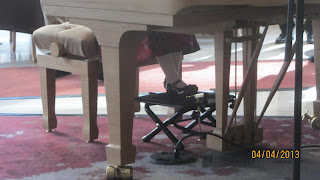 For a diminutive pianist, they have a foot stool with pedal extensions – how ingenious! (Photo: Joseph So) 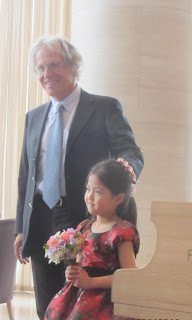 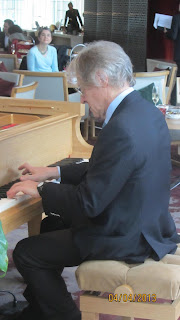 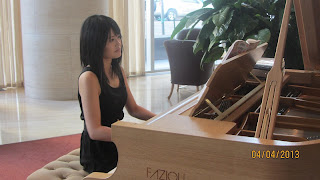