You are at:Home»Uncategorized»Met at the Movies: Hansel and Gretel
Advertisement / Publicité 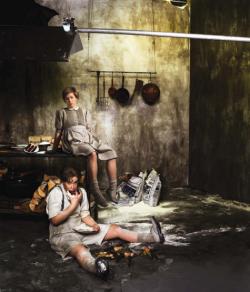 The second installment of the current Met in HD arrived on New Year’s Day. It happened to coincide with a fierce snowstorm that descended on Toronto just hours earlier. But you would never have guessed looking at the huge turnout at the Sheppard Grande in Toronto. Perhaps there was one surprise – the audience demographics remained as superannuated as ever. I spotted all of six children the whole afternoon! Despite the bad weather that can sometimes affect reception, the performance in Cinema Three went smoothly. There was only, literally, a split-second loss of sound, which the theatre manager assured me was the fault of the Met. He also said he personally went up to the theatre roof before the show to make sure the satellite dish was free of snow…

Unlike Toronto, the Met performance was teeming with kids. Afterall, this was a special performance put on for the telecast, and at an hour suitable for youngsters. Holiday Season at the Met usually brings lighter fare, such as the fabulously entertaining Julie Taymor production of Magic Flute last year. But one can hardly call this Richard Jones/John Macfarlane production from Welsh National Opera “light fare”, or frankly, even “entertaining”. This very production was telecast in the UK several years ago and I managed to see it. So this time around, it came as no surprise to me, although I must say I was once again struck by Richard Jones’ singularly dark vision. It seems that under the fanciful patina of many a Grimm’s tale lurks a cruel and gritty heart. Germanic children stories have a knack of scaring the bejesus out of their target readers. OK, perhaps these fairytale operas are meant for adults, not kids. (If you are familiar with the other Humperdinck opera, Koenigskinder, I think you’ll agree with me) Rather than downplaying the darker side of human nature, the Jones production puts it front and centre.
If Met audiences were expecting grandly colourful sets with flying angels, gingerbread houses, dew fairy with her magic wand, a jolly sandman, and a rousing ride by the witch on her broomstick, they were sure to be disappointed. Given the central theme of this production is hunger and its aftermaths, one can sort of understand the perverse decision of setting the three acts in three different kitchens. Act One is set in the traditional kitchen of the family – no problem there. Act Three is in the witch’s kitchen. There’s no forest in the problematic Act Two, just a kitchen cum dining room, with Hansel and Gretel resorting to sleeping on the floor. The fourteen angels are obese chefs, cooking up delicacies in the chidren’s dreams. The only suggestion of forest is the leafy wallpaper and the humanoid-trees. The colour scheme of the whole production, with the exception of a few splashes of colour here and there, is unappealingly monochromatic. Originally designed for the WNO with its smaller stage, this production is much too small for the Met stage, and dare I say unworthy of the Met. It also singularly lacks magic – where is the technical wizardry that we know the Met is capable of? If any opera needs the illusion of magic, it would be this one.
At least the proceedings were partially redeemed by a good cast. The Witch, an unrecognizable Philip Langridge inside an enormous bodysuit, could have been a sister of Mrs. Doubtfire. This Witch didn’t have a nasty bone in her body – she kept smiling, even inside the oven. One almost feel sorry for her! Former soprano Rosalind Plowright, as a suicidal Gertrude, was more unsympathetic than usual. She also sang with acid tone and strident top notes. Alan Held was a jolly and vocally sonorous Father. As the children, soprano Christine Schaefer and mezzo Alice Coote both sounded fresh, although Schaefer does not have an especially sweet sound. They also played their parts to the hilt, just right for the 3800-seat Met theatre, but over-the-top given the numerous television close-ups. The new English translation by David Pountney was colloquial and approachable, although much of the words didn’t come through, especially in the high voices. Despite the sinister and decidedly un-Romantic goings-on on the stage, conductor Vladimir Jurowski brought out the full measure of lyricism of the score from the wonderful Met orchestra. The intermission features with Joe Clark was interesting, although I must say I am getting a little tired of the overly cheerful and solicitous Renee Fleming as the intermission host.
Final thoughts? I’d loathe to take a child to this show as his/her first Hansel and Gretel. It will likely give a young person a distorted view of this opera, not to speak of a jaundiced view of human nature in general. At the risk of sounding didactic about all this, as I see it fairytales function to entertain, but also to elucidate, to educate the young, to teach them right from wong. Which culture advocates cannibalism, even as revenge? The darkness that pervades in this H&G, justified as a reflection of “reality” or modern-day sensibilities (as suggested by Christine Schaefer in the intermission interview) is a sad commentary on contemporary society. Children grow up fast enough, why expose them to the ugliness of adults before their time? Those who enjoy opera directors updating and deconstructing works of the past at any cost may like this show. But to me this is a particularly mean-spirited attempt at an “update”. I think I have had my fill of Richard Jones’ vision.
Joseph So