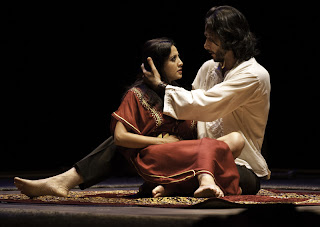 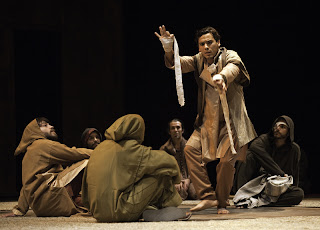 Scenes from Tim Supple’s One Thousand and One Nights (Photos: Cylla von Tiedemann)
One Thousand and One Nights
A Dash Arts Production and Luminato Commission
Dramatized and Directed by Tim Supple
Stories Adapted by Hanan al-Shaykh
June 7 -9 (preview) 10 – 19 (performances)
Joey and Toby Tanenbaum Opera Centre, 227 Front Street
By Joseph K. So
Now in its fifth season, Toronto’s Luminato Festival of Art and Creativity has always focused on exploring edgy and provocative re-imaginings of all facets of the performing arts. This year, the centerpiece of the Festival is its commission of Tim Supple’s One Thousand and One Nights, an audacious re-telling of the old tales known in the west as the Arabian Nights. Luminato has previously collaborated with the British director in A Midsumjmer Night’s Dream in 2008. Supple uses the text of the original stories adapted by Lebanese writer Hanan Al-Shaykh. According to her bio, her novels were initially banned in many Arab countries but are now translated into twenty-nine languages world-wide. This new interpretation bears little resemblance to the sanitized and sugarcoated versions we westerners were exposed to as children. There’s no Ali Baba and no Aladdin in this production, as these characters were added on later in a French translation. The re-telling by Supple and Al-Shaykh is far from bedtime stories for children – it is intense, provocative, explicitly sexual, ribald, violent, and highly emotional, confronting and challenging the audience into abandoning their pre-conceived notions. The production has been five years in development. In Supple’s Notes included in the program, he mentions doing exploratory work in Cairo as early as July 2006. He found Luminato as the creative/funding partner in 2008, and the work began in earnest in 2009. In November 2010, an audition involving seventy performers took place in Alexandria and eventually twenty actors were chosen to participate.
Given the political events that engulfed the Middle East since January of this year, One Thousand and One Nights with its violence, repression, and subjugation of women has take on a contemporary resonance, particularly for the actors who have left behind families and loved ones to come to Canada. Many are understandably worried about the safety of their families at home. Al-Shaykh wrote the text in Arabic, and it’s performed here seemlessly in Arabic, French and English. Unfortunately I was sitting fairly high in the center section, too far from the TV monitors used for the translations for me to read comfortably. For the largely non-Arabic speaking audience, understanding the text was a huge challenge, even though to be fair, the actors largely spoke clearly the vast majority of the time, but some of it was inevitably lost. It didn’t help when the monitors had periodic glitches, with long stretches of dialogue without accompanying translation. Because of the bad sight-lines, I found myself torn between reading and trying to see what’s happening onstage. Twenty stories were told in two parts – some familiar ones, others less so. Supple and Al-Shaykh went to the oldest manuscript to do the research, and the director pointed out in his Notes that little was added or changed. The show was long – two parts each slightly more than three hours, performed in the afternoon and evening. The cast was made up of 19 young, energetic and compelling actors, many of them taking on multiple roles and doing full justice to the heavy physical and theatrical demands placed on them. We western audience members are not used to the gritty, provocative, in-your-face theatrics of this production. Kudos to Supple and his creative team – set designer Oum Keltoum Belkassi, costume designer Zolaykha Sherzad, lighting designer Sabri el Atrous, and sound designer John Gzowski – for their skill in transforming a rather anonymous performing space into one suitable for the story-telling. It was amazing what they did with a simple platform with one movable wall that allowed entrances and exits, plus a few props (like carpets, fabrics and lights dropping from overhead etc.) and the occasional projections.
The central theme of One Thousand and One Nights involves the young bride Shaharazad (wonderfully played by Houda Echouafni) trying to stay alive by telling a serious of fantastic stories to the King Shazaman, who had vowed to take revenge on womanhood after he caught his unfaithful wife in an orgy with her slaves. This opening sequence was expertly – if rather shockingly – executed and deftly directed by Supple. This was followed by a series of fantastic tales that were quite gripping, although I wished I didn’t have to struggle so much with the translations to make out what was said. Despite its length, the three hours in the afternoon – with a short intermission – went by relatively quickly. That said, I wonder if this work is better served by condensing into a single sitting. Special mention must go to the orchestral ensemble for its wonderful playing. Even with the length and some of the production glitches, it was a highly intense theatrical encounter and likely something not previously experienced by most in the audience. The show is definitely worth seeing. Performances continue until June 19th at the Joey and Toby Tanenbaum Opera Centre. http://www.luminato.com/2011/