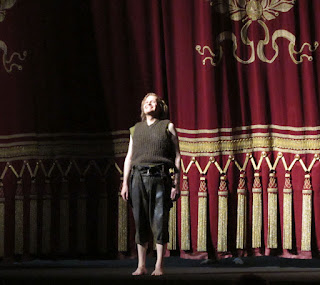 Canadian tenor Lance Ryan generously applauded for his exceptional Siegfried
The Kriegenburg Ring (Cycle 2) continued with a Siegfried very much in the mode of the first two installments, one emphasizing the use of bodies, mostly in flesh-coloured underwear, as the basis for the sets. It worked well for the most part – ingenious and occasionally brilliant ideas, not always executed with the topmost finesse one has come to expect from this great opera house.  Kriegenburg’s approach to Siegfried is to view this piece as the “scherzo” of the Ring, bringing a bigger than usual dose of humour into the proceedings. It worked beautifully in Act 1  – just loved the Forging Scene with the exaggerated, people-centered mechanics. The use in Act 2 of supernumeraries on wires to form trees for the forest scene was executed flawlessly. The forest bird, beautifully sung by Elena Tsallagova, and a mechanical bird perched on top of a pole carried by a supernumerary, brought out all the whimsy of this scene. The slaying of the Dragon – the head of which was essentially made up by a mass of naked bodies – was a visually impressive moment. Staging of Act 3 proved more problematic, particularly Scene 3 when the lovers meet. To this viewer, the acting of Canadian tenor Lance Ryan, as the anti-hero meeting his first female, bordered on slapstick, his characterization turned Siegfried into a veritable L’il Abner. He, and not Brunnhilde (acted with relish and sung with beauty of tone by Catherine Naglestad), was the reluctant virgin on the wedding night. A good actor, Ryan was able to bring it off, but somehow one wonders if this the right approach to the character?  Elsewhere in Act 3, the Wanderer-Erda scene quite well staged. She was surrounded by a large coterie of supernumeraries made up to look like “primitive” tribesman, aka the Yanomamo people of Brazil. Perhaps not exactly anthropologically or politically correct, but it proved at least interesting.  Like Rheingold and Walkure, the glory of this Siegfried was in the singing and the orchestral playing. Lance Ryan, handsome of face and slim of body, was a believable Siegfried. He also had amazing vocal and physical stamina for this punishing role, sounding fresh to the end and was able to match the Brunnhilde  note for note. Catherine Naglestad was an uncommonly  fine Brunnhilde, and the two of them had good chemistry.  The rest of the cast was the best one could hope for – Thomas Mayer followed his very impressive Walkure Wotan with a Wanderer of authority and depth of feeling. Jill Grove was a fine if slightly underpowered Erda. The conducting of Nagano, criticized in some circles as being a bit too leisurely which I find unjustified, gave a supremely lyrical reading of the score, an impressive achievement given it was his first Ring Cycle. 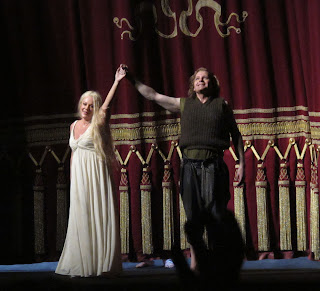 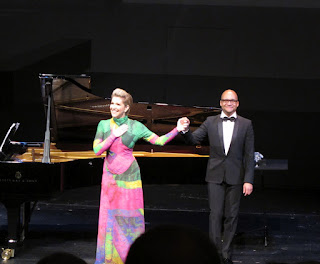 Joyce DiDonato gave a lovely recital despite a bad cold; here taking a bow with her pianist David Zobel 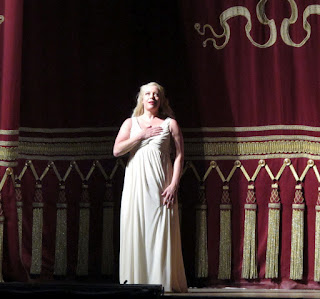 The magnificent Brunnhilde of Nina Stemme receiving thunderous ovations after Immolation Scene
(All photos: Lawrence Lock)
The final installment was of course Goetterdammerung, arguably the most complex, technically and theatrically challenging of the tetralogy. It requires topnotch singers and a clear directorial vision to bring it off. Musically it succeeded in spades. I say that wholeheartedly by offering a personal testimonial of sorts. I suffered an unfortunate injury the day of the opera by running for the tram from the hotel to the National-theater. On that day, there was a detour due to the outdoor simulcast of the opera at Max-Joseph Platz. In my haste to catch the tram as fast as I could, I felt something rip in the back of my thigh. But missing the tram was not an option so I continued. I ended up with a huge rupture of my left hamstrings – as determined by an ultra-sound the following day – that left me hobbling for the rest of my Munich sojourn.  The idea of sitting through six hours of Goetterdammerung on the evening of having suffered this serious injury was rather agonizing, and it was.  But I can honestly say that the power of the Wagnerian score in the hands of Nagano and his orchestra, and of course the magnificent singing of the great cast made the ordeal actually quite bearable – I almost forgot the pain!  A baptism by fire to be sure, but it was worth it.  The next day, I developed a huge and scary hematoma, but that’s another story…
This Goetterdammerung was a stylistic departure from the other three segments in that there is a physical set used to depict the Gibichung Hall. The time is “contemporary”, the single set, a multilevel structure appears to depict a big business concern and symbols of the current European economic crisis are everywhere, none more prominent than the Euro currency symbol as a rocking horse, a mildly amusing touch. The characters are finely if rather idiosyncratically, drawn. Alberich is a cigar-liquor pilfering kleptomaniac; Gutrune a rich, spoiled princess; Waltraute a victim of obsessive compulsive disorder as indicated in the incessant rubbing of her leg.  Some of these touches worked while others didn’t.  The Norn Scene, staged in what appeared to be the aftermath of a nuclear accident, has contemporary resonance, even if the yarn was deliberately broken by one of the Norns, sort of taking some of the magic away.  “Money and Power Corrupt” is underscored by Kriegenburg, especially in the individual characterizations, like Alberich, Hagen, Gunther and Guturne. Hagen’s call of the vassals brings forth not a cadre of warriors but a group of mobile-wielding suits, but once the novelty had worn off, it got tedious – how many cellphone salutes do we need?  Also less than convincing is the transformation of Guturne from a willful and glamorous socialite to a grieving widow. In Kriegenburg’s vision, Gutrune has a more important role than in any previous productions I have seen, a bit too contrived and undeserving in my book. She’s really the only Gibichung survivor, together with the “masses” at the end.   In fact, I find the denouement profoundly unimaginative and unsatisfying, as if Kriegenburg was running out of ideas. .
At the end of the day, the most satisfying aspect of this Goetterdammerung was musical. Top vocal honours went to soprano Nina Stemme, who is the Brunnhilde of one’s dreams today. This Swedish soprano is unquestionably the most astounding Brunnhilde since her countrywoman Birgit Nilsson – Stemme has an equally voluminous soprano but a warmer sound.  I was sitting in the seventh row in the middle of the orchestra, and at times my ears were ringing.  Her finely detailed characterization and dramatic intensity were astounding. Stephen Gould as the mature Siegfried matched her note for note, even if his delivery was excessively stentorian and lacked the lyricism of Lance Ryan. A late replacement, Eric Halvarson was a creditable Hagen, impressive in his Horn Call. Anna Gabler was an excellent Gutrune vocally and visually. Nagano’s coaxed glorious sounds from the orchestra, in a well paced reading of the score. He, the orchestra and the soloists deservedly received repeated vociferous ovations from the appreciative audience.