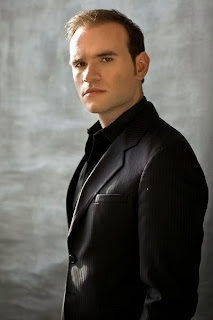 Tenor Michael Fabiano (Photo: Dario Acosta)
You know that saying – everybody loves a tenor?  A good tenor that is!  And good tenors are decidedly not in short supply at the COC. The season opening La boheme has not one, not two, but three tenors as Rodolfo. Since I love tenors as much as anyone, I decided to check out all three. The Rodolfo on opening night on Oct. 3 was Dimitri Pittas, who is of course well known to COC audiences as the Duke in Rigoletto the previous season. Last evening we had the Company debut of Michael Fabiano. Opera lovers will remember him featured front and center in the documentary The Audition, which was shown as part of the Met in HD series three seasons ago. I have heard him live on several occasions. He wowed the Opera Lyra Ottawa audience last season as Rodolfo, opposite soprano Joyce El-Khoury as Mimi. And just last August, I heard him sing an impassioned Alfredo in La traviata at the Santa Fe Opera.  But nothing prepared me for the experience of last evening.  Fabiano was simply sensational, a healthy sounding tenor of beauty and volume, with squillo to burn. His “Che gelida manina” with its thrilling top C was impressive – no downward transposition there.  The audience went wild, a rare occurrence in Toronto.  In the Act 3 duet with Mimi, he did some nice soft singing, showing that he has the mezza voce to go with his impressive fortes, even though in this performance, he chose to make a big sound most of the time. Altogether an auspicious COC debut. Great tenor voices don’t grow on trees – I hope he will be back.
Whenever you have an outstanding debut like this, it tends to overshadow the other singers. But I am happy to report that the alternate cast was very strong. Canadian soprano Joyce El-Khoury was a scintillating and flamboyant Musetta on opening night, so it’s interesting to see her reign in her exuberant personality as the fragile Mimi. The voice is a lovely one with a particularly clear and warm middle, an ingratiating Italianate timbre, with the requisite morbidezza so necessary for Puccini. A sensitive musician, she uses her instrument with taste and sensitivity. Act 3’s “Donde lieta usci” was lovely, as was the rest of the duet with Rodolfo. Her Act 4 death scene was suitably touching.  Former COC Ensemble Studio soprano Simone Osborne took on Musetta (I believe) for the first time and she sang quite well, given it was her first outing. She also acted beautifully, even if her coquette was more prom-queen wholesome than lowdown and sexy. If one were to quibble, the staging of Musetta’s entrance in the Cafe Momus scene is a complete letdown – she walks in almost unnoticed. Where’s the drama? Where’s the grandeur?  The same can be said in the staging for “Quando m’en vo.”
The men included several role or company debuts. Canadian baritone Phillip Addis, heard earlier in the run as Schaunard (his company debut), tried Marcello on for size, impressing everyone with his robust and well focused baritone. His sound may not be warm and mellow like Joshua Hopkins’ (the other Marcello) but Addis’ baritone has more volume. The very promising Ensemble Studio baritone Cameron McPhail was an engaging Schaunard; his lyric baritone has an attractive, slightly veiled timbre, not to mention that he was stellar in the Act 4 horseplay.  As before, Carlo Rizzi proved an old hand in Puccini and he knows how to tug at the heartstrings but always without any trace of vulgarity. The orchestra responded well to him. I only wished the audience would refrain from applause until after has music has stopped – enthusiasm is one thing, but one would want to hear every note of this divine score.  Additional performances with this cast on Oct. 19, 27, 30.  http://coc.ca/Home.aspx