You are at:Home»Classical Music»Vocal»Art Song»Going For Gold: Three Canadian Singers Get Ready for Prime Time (Review)

Take, Then, These Songs
Recital by Aviva Fortunata, Karine Boucher, and Owen McCausland

In the highly competitive world of classical singing, one way for a young artist to get noticed is through competitions. Just look at the long history of Canadian singers who have had their careers launched as a result of winning competitions. An early example was soprano Teresa Stratas’ winning the Met Auditions in 1959, making her mainstage debut as Pousette in Manon the same year. She went on to a long and distinguished career until her farewell at the Met in 1995, as Jenny in Rise and Fall of Mahagonny, a staggering 395 appearances!  That Met statistic is unlikely to be broken in the foreseeable future by another Canadian. 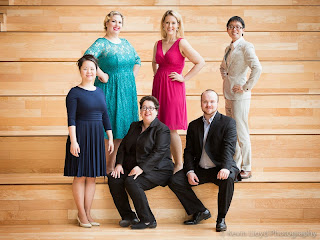 In more recent years, many other Canadians have scored important triumphs, from Isabel Bayrakdarian at Operalia to Elliot Madore and Simone Osborne at the Met Auditions to Andrew Haji’s “triple crown” win at s-Hertogenbosch in Holland last fall. These triumphs have certainly propelled these singers to the head of the pack.  Now, we have three young, fresh voices ready to reach for the top in the next few weeks – soprano Aviva Fortunata representing Canada at Cardiff Singer of the World, soprano Karine Boucher and tenor Owen McCausland ready to give their best at Chant 2015: Montreal International Musical Competition. 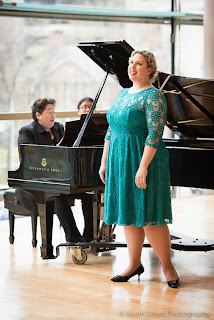 As a “dry run,” the three singers gave a noon hour recital at the Richard Bradshaw Amphitheatre on May 5th. I confess to being a bit of a “competition junkie,” so I was really looking forward to this, although there was absolutely no mention of this at the recital – which is fine as you wouldn’t want to put too much pressure on these young singers.

Soprano Aviva Fortunata began the proceedings with that chestnut for jugendliche dramatischer sopran, “Einsam in truben Tagen.”  Within two seconds, I was impressed by her exceptional voice, a gleaming, golden sound. The first time I heard her was in the fall of 2012. If memory serves, she sang “Ernani, involami,” an audacious choice for the spinto soprano requiring lots of agility. She was fabulous at the time. Now, she seems to have moved on to a different repertoire. Her Elsa’s Dream has serenity and purity of tone, an altogether polished piece of singing. Oh! quand je dors from the Liszt Petrarch songs is another warhorse that appears on recital programs a lot. Fortunata sang it with lovely tone again, the only thing missing is a true, caressing pianissimo high A at the very end, something the judges will be looking for. Still, altogether a very impressive showing and this bodes well for her chances at Cardiff. 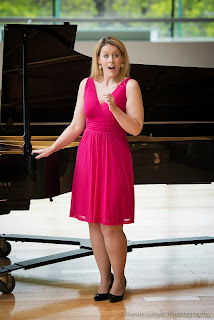 This was followed by soprano Karine Boucher in Lucia’s daunting aria. I first heard Ms. Boucher at one of those joint recitals of the Ensemble with the visiting Atelier lyrique artists. I think she chose the Contessa’s aria and Marietta’s Lied from Die tote Stadt, which she sang with lovely tone and the requisite poise. She surprised me by going from the Countess to Lucia, another side of her art in this recital. Boucher has a nice trill, absolutely important as Lucia; she also has the necessary agility for the intricate coloratura. She sang it with a lively vibrato and attractive tone, a less than totally secure E-flat notwithstanding. I was impressed with her dramatic expression – well, looking like a million dollars in that red dress didn’t hurt either!  Her best work in this recital was in the two songs, Hugo Wolf’s “Kennst du das Land,” and Strauss’ “Cacilie.” I loved the sense of yearning inherent in her tone in the Mignon song – well done!  This is a very long piece but Boucher was able to sustain it, with nice expression, despite the tessitura being a little low for her lyric soprano. The Cacilie was sung with appropriate ecstasy and sincerity of expression. And I mustn’t forget to mention how marvelous the playing of Jennifer Szeto in the Wolf particularly but also the Strauss, both are as much a showcase for the pianist as for the singer. 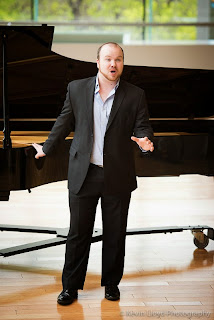 Tenor Owen McCausland has one of those large lyric tenors that are fairly rare, and thus has great potential.  This was evident when he was plucked from the ensemble to step into Idomeneo.  I saw one of the two or three performances he gave (as well as the ensemble show) and he acquitted himself brilliantly. Here, he’s singing Beethoven’s great song cycle “An die ferne Geliebte,” a very challenging sing. Even Ben Heppner once said that memorizing the text of this long, through-composed work was a challenge. McCausland sang it with beautiful, youthful tone – and no memory lapses!  He has a bit of a fast vibrato, but it’s not intrusive here.  I find his voice is at its best when he sings full out, as in the last couple of lines of the last song, a recapitulation of the opening song.  In the past, I found his stage presence a bit reserved, but in his time in the ensemble, he has definitely improved, singing with just the right amount of expression.  Timothy Cheung, an Ensemble Studio graduate and now on the COC music staff, gave the soloist excellent support.

The final group had Ms. Fortunata back with two “modern” pieces. The Ottorino Respighi is new to me. Stylistically a rather solemn, stately song, Fortunata sang it with the requisite weighty tone, contrasting nice with the Frank Bridge piece, which is a familiar song often appearing on recital programs. The soprano’s easy ringing top was very impressive in the Bridge.  The audience gave her and the other soloists a rousing and sustained ovation at the end. I came away with a good feeling that these three young artists will likely do well in their respective competitions. Of course, competitions are never a sure thing.  It is a function of talent, to be sure, but also there’s a huge element of luck involved, not to mention factors that are out of the control of the contestants. The individual – and often idiosyncratic – tastes of the jury panel is crucial. The most a candidate can do is to perform to his/her best ability, and leave the rest to fate.  With these three artists, they are already winners in my book no matter the outcome.  I wish them the very best.