You are at:Home»Uncategorized»Ehnes-Parker Recital an Auspicious Start to Toronto Summer Music Festival 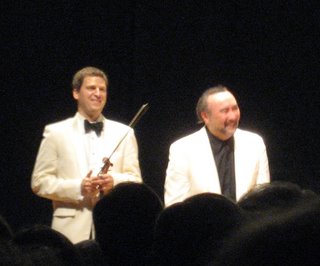 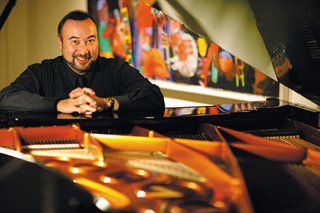 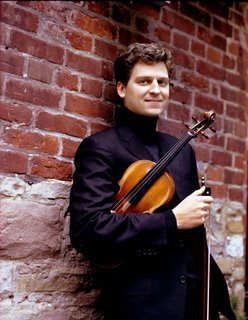 The 2009 Toronto Summer Music Festival got off to a suitably festive start last evening at the Carlu, the legendary concert venue that used to be known as the Eaton Auditorium, in the building that used to house the old Eaton’s department store. Now we know it as College Park, of course. After years of disuse and neglect, the refurbished concert hall re-opened a few years ago. The concert last evening attracted a very diverse crowd of music lovers – I noticed many long time supporters of the Toronto music scene in attendance, as well as many youngsters who are participating in the ‘academy’ part of the Toronto Summer Music Festival. I was of course looking forward to the joint concert of violinist James Ehnes and pianist Jon Kimura Parker, two of the shining lights in Canadian music today. As unbelievable as it may seem, this was their first time playing together. They have chosen a very challenging program –
Mozart Sonata in G Major, K 301
Prokofiev Sonata No. 1 in F Minor, Op. 80
Aaron Jay Kernis Air
Ravel Sonata for Violin and Piano
The hall was completely sold out, and this being opening night, there was a real sense of occasion. The harmony and precision of the two artists making music in a duo recital was exceptional – it is hard to being this was their first time playing together. Ehnes’s trademark singing tone was very much in evidence throughout. Parker, a celebrated soloist in his own right, adopted just the right dynamic level, never overpowering the violin but at no time receding into the background either. I understand the two had just a single day of rehearsals, but they played as if they had been doing this together all their lives – a remarkable achievement. If the Mozart set a happy tone, the Prokofiev sonata was one of the composer’s darkest works. Ehnes brought out its inherent lyricism without glossing over its pain. (This work, incidentally, was performed by Oistrakh and Richter at Prokofiev’s funeral) For those in the audience who were not chamber music aficionados, this piece was challenging, but ultimately rewarding.
In the second half, the mood changed considerably. It began with a work by American composer Aaron Jay Kernis. A violinist himself, Kernis composes gratefully for the instrument, with a full spectrum of tone colours. I find this very lyrical piece totally accessible and delightful – it was a highlight of the evening. There are moments of extreme high tessitura, an acid test for the violinist’s technical control. As expected, Ehnes played with power, nuance, and ethereal tone. The formal part of the concert concluded with the Ravel Sonata for Violin and Piano, a real tour de force, and arguably the centerpiece of the evening. Stylistically it echoes the Kernis piece – their pairing, back-to-back, is an inspired stroke. The first movement was exquisitely played by both artists. Ehnes played the second movement with its jazzy rhythms and extra sound effects with great panache. The meaty third movement, the “perpetual motion”, is a bravura showcase for the violin, and Ehnes demonstrated why he is the Canadian violinist non pareil today, one with a prodigious technique, but always at the service of the composer and the music. This brought the audience to its collective feet time and again. This was probably the most vocal and demonstrative chamber music audience I have witnessed in a very long time! The two artists rewarded the sold out crowd with two peices, the rousing Square Dance, and a second encore by Ravel.
The musical values of this concert were of the highest order, but I must point out that the venue left something to be desired. Perhaps because of its infrequent use, the two stage spotlights were aimed too far into the auditorium, blinding the audience. It was painful and distracting – a situation that must be corrected the next time this hall is used for a concert again. Also, surprisingly I find the acoustics a little cold, especially for the piano. But my major complaint is the lighting. Even when all the lights are turned on, the auditorium remains dimly lit. The seats, while padded, are put too close together, making for very uncomfortably seating. After the concert, everyone was invited for champagne, strawberries and cookies in the spacious lobby – a generous gesture by the evening’s sponsors.
The next concert of TSMF is tomorrow (Thursday July 23 8pm), with the legendary Menahem Pressler joining forces with violinist Alexander Kerr, violist Lawrence Dutton and cellist Paul Watkins in an evening of Mozart and Dvorak, at the MacMillan Theatre.