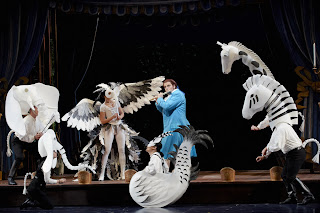 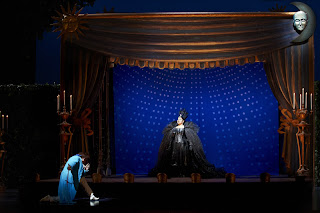 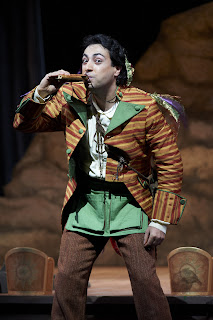 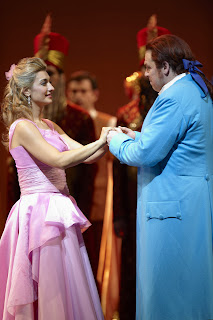 Top: Tamino and Animals
Left: Aline Kutan (Queen) and Michael Schade (Tamino)
below left: Rodion Pogossov (Papageno)
Bottom: Isabel Bayrakdarian (Pamina) and Michael Schade (Tamino) All photos by Michael Cooper
The COC winter season opened on Saturday with a new production of The Magic Flute. After a controversial Aida and a thematically depressing Death In Venice, it was good to have something like The Magic Flute to lift the spirits of winter-weary Torontonians. For once, it’s good to have a Flute that doesn’t take itself too seriously. I’ve seen more than my share of this opera, and sometimes the designers and stage directors take it so seriously that all the fun is sucked out of the show. This production is full of charm – sitting in front of me on opening night was a little girl, who sat silently during the whole opera, totally transfixed on the proceedings on stage. Turning the opera seria into commedia dell’arte, director Diana Paulus and set/costume designer Myung Hee Cho use the old trick of a play within a play to keep it light. The Masonic symbolism all but disappeared in the production, instead we have whimsical and evocative touches and brilliant colours. Unlike the truly magical – and rather literal – August Everding Munich production I had the pleasure of seeing 25 years ago, the COC show doesn’t have real fire and real water – just dancers in fiery reds or icy silvers symbolizing trial by fire and water. Also, unlike Munich, the Genies don’t come down from a hot air balloon. The black and white animals are fabulous. The COC production may not be high tech like the Met’s or magical like Munich, it proved to be equally entertaining. This is the kind of updating that may seem very tame for European tastes, but for North America it’s ideal. Because of the already established commedia dell’arte approach, bringing the Queen back for the finale was perfectly appropriate. Unlike the COC, the one I saw in Santa Fe last summer, bringing back the Queen for the festivities of the victory of good over evil was simply weird.
The musical side of things was in good hands. Being German, COC Music Director Johannes Debus was certainly in his element in this work, leading the COC Orchestra with a sure hand. He made a bigger contrast in tempi than usual – the slow was really slow in the beginning of the overture, then it sped up! Elsewhere he gave a well considered reading of the score. Since there are twelve performances, Tamino and Pamina are double cast. (I will be returning to a later performance to hear Simone Osborne and Frederic Antoun) On opening night, soprano Aline Kutan was a sensational Queen of the Night, nailing the coloratura with precision, and all the high F’s were spot on. With only 10 minutes of music, she made every second count. Russian baritone Rodion Pogossov was an energetic and ultra-playful Papageno, acting up a storm and singing with gusto and beauty of tone. He was of course our Figaro four years ago, and at the time I singled him out for praise in my review in Opera (UK). He has since made his Met debut and is engaged there annually for the next several years. Canadian tenor Michael Schade has sung a staggering 250 performances as Tamino and it showed. He brought to this role knowledge, experience and musicality, even if his tone has hardened over the years. Soprano Isabel Bayrakdarian has only sung Pamina very few times – I recall at the Academy of the West early in her career. An engaging and sympathetic Pamina, Bayrakdarian sang with a large, rich tone particularly in the middle voice but had difficulty with mezza voce and the high lying phrases in “Ach! ich fuhl’s.” The Three Ladies (Betty Allison, Wallis Giunta and Lauren Segal) with their leather outfits and glasses wouldn’t look out of place in a dominatrix convention. They sang well and were really quite funny. It’s nice that contemporary staging have stopped putting Monostatos (nicely sung and acted by John Easterlin) in black-face. Young Russian bass cantante Mikhail Petrenko was a fine Sarastro, although he didn’t really have the booming bass of a Matti Salminen, and they didn’t give him any “old makeup.” The Three Genies were taken by three young women – how Ann Cooper Gay managed to get them to sing like young boys with no vibrato I’ll never know! All in all, a Flute to lift your spirits and leave the theatre smiling.
Performances at the Four Seasons Centre continue on Feb. 1, 3, 6, 8, 10, 12, 16, 18, 20, 23, 25, with a special Ensemble Studio show on Feb. 17.