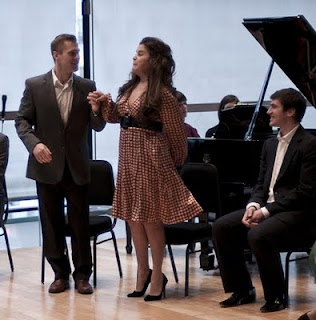 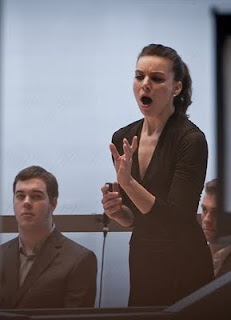 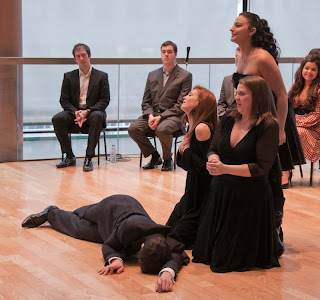 Top Photo: Ambur Braid as Queen of the Night, Neil Craighead (Speaker) seated.
Bottom photo: foreground (l. to r.) Christopher Enns (Tamino), Wallis Giunta (Second Lady), Rihab Chaieb (Third Lady), Ileana Montalbetti (First Lady); background (l. to r.) Michael Uloth (Sarastro), Neil Craighead (Speaker), Simone Osborne (Pamina)
All photos: Chris Hutcheson http://chrishutcheson.com/
Highlights from The Magic Flute
Artists of the COC Ensemble Studio
Tamino, Christopher Enns, tenor
Three Ladies, Ileana Montalbetti, sop., Wallis Giunta, mezzo, Rihab Chaieb, mezzo
Papageno, Adrian Kramer, baritone
Papagena, Jacqueline Woodley, soprano
Queen of the Night, Ambur Braid, soprano
Pamina, Simone Osborne, soprano
Sarastro, Michael Uloth, bass
Speaker, Neil Craighead, bass-baritone
Pianist: Anne Larlee
January 18, 2011 12 p.m. Richard Bradshaw Amphitheatre, Four Seasons Centre
“Zu Hilfe! Zu Hilfe!” (Three Ladies, Tamino)
“Der Vogelfanger bin ich ja” (Papageno)
“O zittre nicht” (Queen of the Night)
“Hm! Hm! Hm!” (Three Ladies, Papageno, Tamino)
“Bei Mannern” (Pamina, Papageno)
“Wo wilst du kuhner Fremdling hin?” (Speaker, Tamino)
“Wie stark ist nicht dien Zauberton” (Tamino)
“O Isis und Osiris” (Sarastro)
“Wie? Wie? Wie?” (Three Ladies, Tamino, Papageno)
“Soll ich dich Teurer nicht mehr sehn” (Pamina, Tamino, Sarastro)
“Pa – pa – pa” (Papagena, Papageno)
By Joseph So
It’s often said that Mozart is balm for the singing voice, and in particular young voices. So it’s logical for the COC to choose The Magic Flute from among the 7-opera 2010-11 season to showcase its Ensemble Studio artists. Yesterday we got a chance to hear what these young singers can do. All of them will appear in the specially-priced Ensemble show on Feb. 17, and most will sing supporting roles in the other mainstage performances. So this noon hour concert was a sort of ‘dry run’ for them. It’s amazing how much music can be squeezed into a single hour – in fact, 11 pieces were dispatched in just 45 minutes! A couple more arias could have been included, such as Pamina’s “Ach, ich fuhl’s” or Queen of the Night’s dynamite “Der Holle Rache.” While all ten singers, all at the beginning of promising careers, bring to the stage their unique brand of artistic gifts, what they do have in common are fresh, attractive voices, solid training, and most importantly an unswerving focus, commitment and dedication so necessary to succeed in this difficult profession.
In this one hour, I heard a great deal of beautiful singing and vivid acting. This preview really makes me look forward to the Feb. 17 Ensemble show. Among the many highlights was the opening scene, “Zu Hilfe! Zu Hilfe!” where Tamino swoons after being pursued by a serpent. The Three Ladies fight among themselves over the handsome prince. I loved the highly detailed staging by Diana Paulus, funny but not over-the-top. Montalbetti, Giunta and Chaieb were an impressive trio of Ladies, and they really got into the good-natured fun of this scene. Christopher Enns has a bright, ringing tenor of good volume and fine quality. I last heard him in a Heliconian Hall concert over a year ago, and he showed a great deal of promise then. Since tenors don’t grow on trees, I predict Enns will have a fine future if he continues to develop, learns to pace himself and not push his voice. I also liked Adrian Kramer’s “Der Vogelfanger bin ich ja” – he is perfectly cast as Papageno, singing with a beautifully modulated, compact-sized voice and acting up a storm, the only thing missing was his pipe! For a principal role as short as the Queen of the Night – under ten minutes of singing depending on the tempo – it almost always gets a disproportionate amount of applause. This afternoon was no exception – coloratura soprano Ambur Braid wowed the audience with her vocal pyrotechnics, displaying a big, perfectly placed high F in “O zittre nicht, mein lieber Sohn.” The fast rising soprano Simone Osborne was a warm and endearing Pamina in her charming duet with Papageno; and Jacqueline Woodley a delightful Papagena in that short duet with Papageno. The audience gave the artists a rousing ovation at the end. Over more years than I care to mention, I’ve seen dozens of performances of The Magic Flute. I dare say it’s never lost its magic with me. It’s great to be once again under its spell.