COC Opens Season with a Musically Satisfying La boheme
– Joseph So
October 3, 2013 7:30 pm
Four Seasons Centre
Puccini: La boheme
Grazia Doronzio (Mimi)
Joyce El-Khoury (Musetta)
Dimitri Pittas (Rodolfo)
Joshua Hopkins (Marcello)
Phillip Addis (Schaunard)
Christian Van Horn (Colline)
Thomas Hammons (Benoit/Alcindoro)
Owen McCausland (Parpignol)
Carlo Rizzi /conductor
John Caird / director
David Farley / designer
It comes as no surprise that year after year, La boheme ranks among the most popular of operas. Based on the most recent statistics worldwide of five seasons from 2008-9 to 2012-13, this Puccini warhorse has the honour of third place among 2,415 operas in terms of frequency of performances (471), only bested by La traviata (553) and Carmen (477).*  Its popularity is easy to understand – at the risk of being rhetorical, is young love ever out of style?   And when its poignant story is framed by a melodic inspiration and a theatricality that are hallmarks of Puccini, its enduring popularity is assured. The COC season-opener fit the bill perfectly, given the surfeit of youthful, attractive singers with lovely voices, a traditional production that appeals rather than shocks, and an internationally renowned maestro totally at home in the Italian repertoire. Last night, the Four Seasons Centre was virtually full. Interestingly, instead of the usual older audience, there was a nice cross section of ages. If early audience reactions were on the reserved side, many were up on their feet at the end cheering. Another season successfully launched. 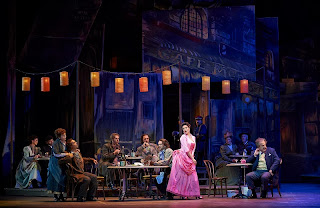 Musetta (Joyce El-Khoury) at center stage in Act 2 Cafe Momus (Photo: Michael Cooper)
This new co-production with Houston and San Francisco replaces the 24-year old Wolfram Skalicki production that had served the Company well. That said, the old production was labour-intensive, requiring three intermissions, stretching a one hour forty-five minutes opera into a full three hours. This new one with sets and costumes by David Farley is so efficient that scene changed took place in something like 15 seconds!  Act 1 resembles an art studio, with Marcello’s paintings its main feature. Act 3 opens with Marcello painting frescoes on the wall, underscoring Musetta’s later “house-painter” insult.  The sets, while not lavish, have the requisite romanticism. That said, the subdued lighting creates a rather monochromatic feel, lacking the vibrant colours one has come to expect in the Cafe Momus scene. Curiously, the sets are placed so far forward that the space for action is limited, especially in the crowd scene in Act 2.  On the other hand, with the voices so far downstage, everyone sounded loud and clear on opening night. 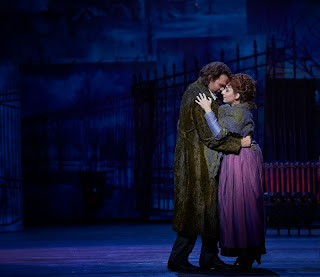 The star-crossed lovers: Grazia Doronzio and Dimitri Pittas (Photo: Michael Cooper)
The cast is very strong, with not a weak link, from the principals down to the smallest roles. To my ears, particularly impressive was the warm and gorgeous baritone of Joshua Hopkins, who is now deservedly at the Met. Canadian soprano Joyce El-Khoury made an auspicious COC debut as Musetta, offering tastefully flamboyant characterization and scintillating vocalism, with a remarkable diminuendo on the B natural at the end of “Quando m’en vo.” It will be interesting to see how she’ll reign in her exuberant personality to impersonate Mimi later in the run.  Italian soprano Grazia Doronzio made her COC debut with this performance. Her diminutive figure and gentle characterization, combined with a lovely lyric soprano, made her Mimi a real pleasure. Tenor Dimitri Pittas, one of three Rodolfo’s in this run, is no stranger to Toronto audiences. He was last heard at the COC as the Duke in Rigoletto. His was a bright-voiced, ardent Rodolfo, making his transposing “Che gelida manina” down a semitone a mere quibble. Baritone Phillip Addis was equally impressive in his COC debut as Schaunard. (Later in the run, Addis will try Marcello on for size in four performances.) With his imposing height, American bass Christian Van Horn looked every inch the philosopher Colline, and he has the gravitas for an affecting Coat Song. Character bass-baritone Thomas Hammons, last heard here as Kissinger in Nixon in China, was an uncommonly well sung Benoit/Alcindoro. Parpignol may only have one line, but when taken by a voice as beautiful as tenor Owen McCausland’s, one takes notice. (Incidentally, this role was the Met debut of the great American heldentenor James McCracken!)   All in all, it was one of the strongest Boheme casts I’ve heard in memory. 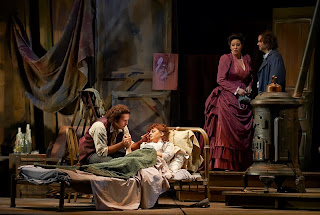 Dimitri Pittas, Grazia Doronzio, Joyce El-Khoury, Joshua Hopkins (Photo: Michael Cooper)
This performance marked the COC debut of Italian conductor Carlo Rizzi, who knows this score like the back of his hand. He shaped the phrases with affection, and his attention to detail was exemplary. Overal, his was a supremely lyrical reading. This maestro knows what he wants, and how to achieve it. I hope the COC will bring him back.  Stage director John Caird kept things traditional, but with just enough little touches to make it interesting.  All in all, a fine season opener. There are 11 more performances. For details, go to    http://coc.ca/Home.aspx 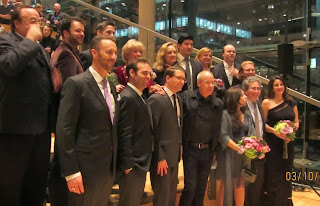