“The great problem of the concert hall is that the shoebox is the ideal shape for acoustics, but no architect worth their name wants to build a shoebox.” Fortunately for classical concertgoers, this ­remark from Harvard professor of architecture Rem Koolhaas was made tongue-in-cheek.

In recent years, the hall’s managers, patrons and performing organizations lobbied for an array of sorely needed upgrades and ­improvements. Additionally, the Orchestre ­symphonique de Laval had identified specific shortcomings in the facility’s ability to serve as its principal performance venue.

The notoriously uncomfortable audience seats and antiquated lighting system had to go. Chief architect for the renovation project, Lidia Minicucci of Minicucci Architecte, said that ­although acoustical alterations were an important consideration, they were by no means the only factor. Her firm was charged with ­increasing the seating capacity and enhancing the hall’s capacity to host rock, jazz, pop and classical concerts as well as theatrical events. 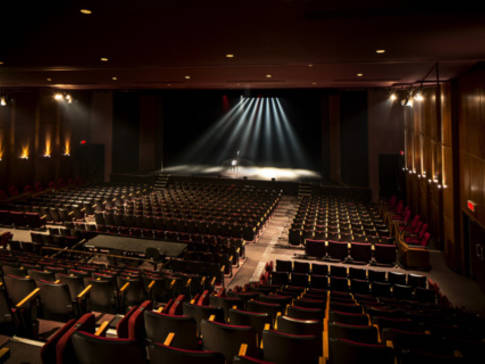 In an interview with La Fabrique Culturelle, OSL music director Alain Trudel said before the renovation, the orchestra’s sound was not well projected. He felt that presenting a concert using the former sound shell was analogous to putting water into a sieve – the sound leaked out everywhere. OSL concertmaster Antoine Bareil also told La Fabrique Culturelle that an orchestra of its calibre ­deserved to perform in a better acoustic.

Acoustical engineer Christian Martel of Octave Acoustique Inc. was involved in both the 1999–2000 and 2016 renovations to the hall. He explained that the first renovation focused on ­optimizing the acoustics for comedy shows and pop/rock concerts. However, in 2016 the concerns of the OSL were given priority. He acknowledges that this theatre possesses many structural and acoustical shortcomings. The ceiling is too low, probably less than two stories high. In contrast, the adjustable ceiling of Maison Symphonique may be raised up to more than twice that height. Although Salle Andre-Mathieu resembles a classical shoebox design, the slope at the rear of the theatre creates a dead spot. These particular issues cannot be corrected without a major demolition, which would have greatly exceeded the scope of the $2.8 million renovation. In contrast, Maison Symphonique cost approximately $110 million.

Nonetheless, the acoustics have now been demonstratively improved. It was decided that ­replacing the sound shell, the three-wall structure that encases the orchestra onstage, would be the most efficient way to address the OSL’s acoustical concerns. The purpose of the shell is to project the sound toward the audience instead of letting it loose in the stage area. Although the new orchestra shell was not custom-made for this theatre, it has significantly enhanced the overall acoustics, primarily by projecting more of the OSL’s sound to the audience. Martel is aware that the hall still needs to be more reverberant, but explains that there is no way this can be achieved short of structural alterations. He is satisfied that thanks to this renovation, the Salle André-Mathieu provides better acoustics for the venue’s diverse performances. 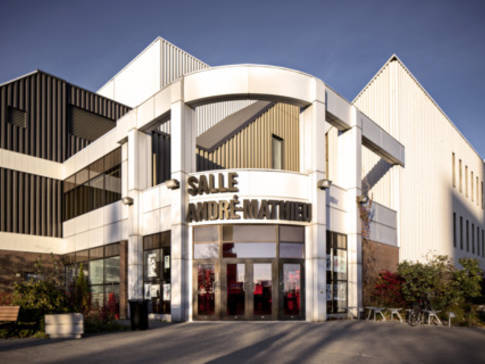 Minicucci said that the acoustics in general and the diffusion of the orchestra’s sound in ­particular were further improved by both curving and altering the angles of the wood panelling on the side walls towards the rear of the hall.

The OSL had also pointed out that the size of the stage was inadequate for those ­programs that use a large orchestra. Minicucci solved this by allowing a few of the front rows of the audience seating to be removed. Stage extensions were built for this newfound space.

The OSL may be heard in its newly improved concert hall on April 19 in a Russian program of works by Airat Ichmouratov, Tchaikovsky, and Shostakovich featuring cellist Stéphane Tétreault. Trudel will be the featured trombone soloist as well as the conductor for a May 24 program that includes Shostakovich’s Fifth Symphony. Dress rehearsals for each concert are open to audiences at 1:30 PM on the same day as the performance.

Founded in 1984, the Orchestre ­symphonique de Laval employs 53 ­professional musicians. Each year the ­Orchestra presents six to eight concerts at Salle Andre-Mathieu. In 2013 the ­Conseil Québecois de la musique awarded the OSL an Opus Prize in recognition of its outstanding young persons’ program. In 2015 the Orchestra released a ­recording of Respighi’s Il Tramonto under the baton of music director Alain Trudel, featuring soprano Isabel Bayrakdarian.

The Laval concert hall is named in ­honour of Canadian composer and pianist André Mathieu. In 1936 at age 7, Mathieu went to Paris to ­pursue musical studies, where he was nicknamed the “Little ­Canadian Mozart.” At age 12 Mathieu won first prize in the New York Philharmonic’s 100th Anniversary Composition Contest, and consequently performed his Concertino no. 2 for Piano and Orchestra at Carnegie Hall. Some of Mathieu’s music was featured at the opening ceremonies of the 1976 Montreal Olympics.