You are at:Home»Arts Industry»A Splendid Pavilion for Peace and Art Therapy

The Museum of Fine Arts commemorates the Hornsteins.

Emotions were running high at the Montreal Museum of Fine Arts (MMFA). On November 4, 2016, the solemn inauguration of the Pavilion for Peace took place. The pavilion bears the names of two of the most prominent patrons in MMFA history: Michal and Renata Hornstein. The two passed away just a few months before the event and the beginning of Montreal’s 375th anniversary celebration. They had both prepared speeches for the occasion.

“As Holocaust survivors, we want the Michal and Renata Hornstein Pavilion for Peace to be a safe and pleasant space for international visitors to admire works and to learn and heal through art,” they said. “We know that art can bring people together and foster the understanding, tolerance, and dialogue that bridge the deepest divides.” At the inauguration ceremony of the MMFA’s fifth pavilion, dedicated to international art and education, this message from the deceased donors had a powerful impact. The pavilion was built to house the Hornsteins’ extraordinary donation of one hundred paintings by the old masters—the greatest private contribution in Quebec’s modern museum history. The gift also motivated the Quebec government to award the museum a grant of $19.5 million. 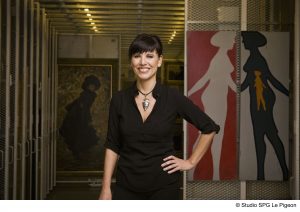 “We have close to eight hundred works telling the story of art from the Middle Ages to the contemporary period,” said Director General and Chief Curator Nathalie Bondil. “But some of our most highly regarded works have been kept in storage due to a lack of space. Clearly, without Michal and Renata’s support and their gift, we would never have this kind of international profile.”

“It is possible to turn an unspeakable incident of appalling cruelty into an act of creation, beauty, and talent. This is the great message that Michal and Renata have left us,” said Premier Philippe Couillard. Martin Coiteux, Minister of Public Safety, Municipalities and Minister responsible for Montreal; Luc Fortin, Minister of Culture and Communications and Denis Coderre, Mayor of Montreal, were also present. Coderre emphasized the role of this and similar events in making Montreal an international cultural metropolis. 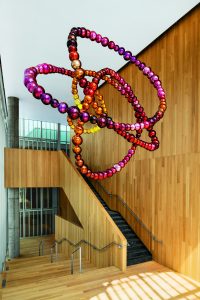 Many donors were present at this fine arts celebration, including Michel de la Chenelière, who gave his name to the museum’s renowned International Atelier for Education and Art Therapy.

“The Museum welcomes more than a million visitors per year. Despite this telling number, many people still avoid stepping into the art world,” said Chenelière. “People think that art isn’t for them, that it belongs to the social elite.” However, more than 300,000 people do take advantage of the Museum’s cultural and educational services, including 75,000 students in the Greater Montreal area.

The building has six floors, including two that are dedicated to education and the community. In fact, the new pavilion’s main purpose is educational. “The Museum has made extraordinary progress in the past few years thanks to Michel de la Chenelière,” says Bondil with a smile. “His support allowed us to go from three workshops in 2011 to twelve in 2016. The number of participants has increased by 207%. Those are record numbers in Canada!”

Bondil worked around the clock to ensure the project was completed on time. The museum’s board of directors has just extended Bondil’s contract through 2021, praising her “ability to innovate and think outside the box.”

The Pavilion in Numbers 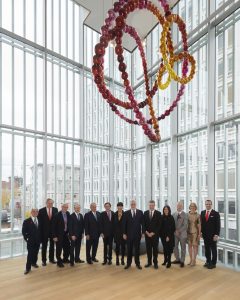 The Michal and Renata Hornstein Pavilion will be free to the public until January 15, 2017. Its four galleries are dedicated to international art and education. This legacy of Montreal’s 375th anniversary was built at a total cost of $25.5 million, as per the original deadline and with no added costs, which is an achievement in itself. The Quebec government gave $19.5 million, and the federal government added $1.5 million. An additional $2 million dollar donation from Michel de la Chenelière allowed the addition of an extra floor. The operating budget ($700,000 annually) will be paid through a fund established by Michal Hornstein and other private sponsors. The main floor and basement will be dedicated to education and art therapy, hosting school field trips and introductory workshops. The upper floors are home to eight hundred works, ranging from the Middle Ages to the contemporary period. The new building, stretching for 5,000 m2 (the MMFA’s overall area is 53,000 m2), was conceived as an “open, urban space, integrated into the city itself” by Atelier TAG architect Katsuhiro Yamazaki.

Works by the old masters (including Mantegna, Veronese, Rembrandt, Gainsborough, Corot, Tissot, Monet, Rodin, Matisse, Dix, Miró, Picasso, Giacometti, Richter, and Ben Weider) are ingeniously placed alongside those by contemporary artists (including Beaulieu, Beauséjour, Coutu, Pelegrinuzzi, Pouliot, Steinman, and the EN MASSE and MU collectives), in elegant harmony with the building’s luminous architecture. “When the museum that exhibits art is itself a work of art, it’s wonderful!” said Premier Couillard, enthralled by this “new architectural gem in the heart of Montreal,” an ode to beauty and peace.