You are at:Home»Uncategorized»Îles du Bic Festival – A tradition of innovation

When Élise Lavoie and James Darling started the Îles du Bic Festival in 2002, they wanted to marry their interests as chamber musicians with a shared love of nature and history. In the ensuing years, this event still reflects the mindset of its founders. For Darling, it’s a matter of maintaining relevance and being willing to think things over. This year’s edition, the 18th , runs from Aug. 3 to 11. The program is ­varied, its headliners being the Forestare Guitar Ensemble, Helios Voices, pianist Maxim Bernard, the Baroque Ensemble la Fresque with Jean-François Bélanger, the Choeur 18e, the Salicone Duo and a pair of newcomers to the event, Jonathan Huard and Philippe Gagné.

All told, there are 25 performances on tap with more than 65 guests gracing its program. Staged in an area around Bic and Saint-Fabien, not too far from Rimouski, this event has developed a devoted following over the years, its charming surroundings turning it into one of the major tourist attractions of the lower St. Lawrence peninsula. 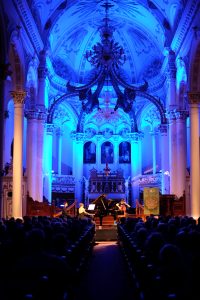 Darling is not only enthralled by the many musical encounters and exchanges that have ­occurred over the years, but also by its backdrop, its historical venues blessed with good acoustics that are truly inspirational. He is equally proud of pairing local artists and rising talents with more seasoned ones on the international scene for exclusive festival performances.

Of the program highlights, Darling mentions the piano recital Chopin Légendaire by Maxim Bernard on Aug. 3 at the Sainte-Cécile Church in Bic. Also eagerly awaited by him is the ­performance of the Saint-Germain String Quartet with double bassist Annie Vanasse. The ­Ensemble de Guitares Forestare, for its part, will appear on Aug. 7 in an evening ­dedicated to French music, with works by ­Debussy, Bizet, Fauré and others. Helios Voices will make the trek from Nova Scotia to arrive the next day for its show at the Saint-Fabien Church, one that will be preceded by a talk given by Mario F. Paquet. This will be the opening act, the ­second part marking a return engagement by a choir put together by the ­festival that will perform Fauré’s Requiem. On Aug. 9, another double bill is in the offing, with Cabaret du 18e and Jean-François Bélanger taking the stage of the Vieux-Théâtre in Saint-Fabien, then the Baroque ensemble Frasque. Pianist Bernard is slated for another ­appearance, this one ­presenting Ravel’s famed ­Concerto in G. Also programmed that evening are bassoonist Mathieu Lussier, pianist ­Maurice Laforest and trumpeter Benjamin Raymond, not to forget the percussion-piano duo of Huard and Gagné. Also worth noting is the Forestare masterclass earlier that day scheduled at the music conservatory of ­Rimouski.