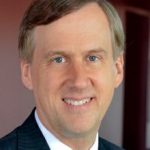 Keith Cerny comes to Calgary with what he describes as a “hybrid” background in classical music and business technology. The accomplished pianist arrived mid-January to start work as the newly appointed general director of Calgary Opera.

“The reception has been great,” says Cerny, who left the same position with the Dallas Opera, a company with a larger budget and a bigger mainstage season.

“[Calgary] has a lot to offer. It has an extensive track record,” he insists. Two other key factors in deciding to move were a “clear-thinking board” and “one of only three National Emerging Artists Programs.”

Although plans for this coming season had already been made, Cerny was able to make additions, such as Canadian Premiere of Everest by Joby Talbot and Gene Scheer, a work he commissioned while in Dallas based on the 1996 disaster involving a pathologist left for dead on the mountain of the title.

This will open in February 2019. In May 2019, Calgary Opera gives the world premiere of Ghost Opera, a work involving puppets to be presented by the Emerging Artists in May of 2019.

The season opens with The Magic Piano & The Chopin Shorts, a 3D animated film accompanied by a live pianist. Partnering with the National Music Centre, Honens International Piano Competition and the Calgary International Film Festival, Cerny hopes that this event will reach out to a new community, but also highlight the season’s focus on collaboration.

Partnering with Old Trout Puppet Workshop and the Banff Centre for Arts and Creativity, Ghost Opera by Veronika Krausas with a libretto by André Alexis will call on Old Trout’s “wildly innovative and irreverent style” to bring this show to life. Cerny hopes that multimedia crossover work will “bring something brand new to the stage.”

His policy in Calgary will be not to ignore tradition but revive interest in favourites with advances in theatre technology.

“As opera embraces new technology, we can use that to connect to our older audiences,” Cerny says.

For instance, in November, Jean Grand-Maître, artistic director of Alberta Ballet, will direct tenor Adam Luther and Calgary Opera Emerging Artist alumna Anne-Marie MacIntosh in the title roles of Gounod’s Roméo et Juilliette conducted by Gordon Gerrard. In December the Emerging Artists will be joined by a boy soprano for Menotti’s Amahl and the Night Visitors, and in April 2019 the company presents baritone Gregory Dahl in the title role of Rigoletto.

“A third pillar is community,” says Cerny. “One of my goaIs was to increase our community involvement. Calgary already has a great education program in place in both the young artists and the school programs.” This was a reference to the company’s Let’s Create an Opera and Opera in the Schools program for elementary students.

Continuing on that path, after a hiatus in 2018, Calgary Opera brings back its popular Opera In the Village series in August of 2019 with an abridged version of Bizet’s classic Carmen.

“I want to bring opera out of the four walls of an Opera house.” Cerny says.