Keiko Devaux was already a composer at age five. Unsatisfied with the methodical character of her piano lessons, she found freedom by playing the top line of the score as written and inventing the rest. Thirty-three years later, Devaux has been named the inaugural winner of the $50,000 Azrieli Commission for Canadian Music.

Her youthful preference for improvising over practicing was prophetic. Moved by a desire to create rather than make perfect, Devaux went on to earn both a Bachelor and Master’s degree in composition at the Université de Montréal. She is now working on a doctorate at the same school with Ana Sokolović and Pierre Michaud.

“Montreal was the place to go if you wanted to try and live as an artist,” says Devaux of her decision to move from her native Nelson, B.C. to study in Montreal. Her father being from France, Devaux was also drawn to the challenge of living in a bilingual environment, where she could connect with the French language.

Composition for Devaux entails being in a constant state of renewal. “It is a process that yields uncontrollable results, celebrates error, chaos and the unknown,” she says. “Being in a job that allows you to fully master what you do doesn’t appeal to me.”

Instead she chooses composition for its perpetual “newness and discovery” and the demands it makes on her to be “honest and vulnerable.” She hopes these traits allow her to connect with audiences in a special way.

Devaux has accumulated many unexpected compositional interests. She seeks out influences that will help her develop methodologies and gestures, which she then adds to what she describes as her compositional toolkit. Early on in her career, for example, she took to transcribing movie scenes that had both music and dialogue as a means of experimenting with silence and pauses.

Later she became fascinated by natural phenomena, especially emergent behaviour, such as the schooling of fish, bioluminescence and the murmuration of starlings. More than a literal or mathematical representation of these things, Devaux aims to represent both the phenomena as well as her experience and perspective as an intermediary. “You lose a bit of compositional licence when you don’t reflect human intervention,” she says.

Devaux explores the limitations and the complexities of what we hear and see, as much as the naturally occurring phenomenon itself. She makes recordings, uses computer renderings, and creates electroacoustic mockups of sounds, then transcribes them by ear. This process of manipulation and translation allows her to find her voice and maintain an element of self in her work.

Another fascination lies in the idea of memory. Devaux has recently sought to create “familiarities through sound,” and attempt to do what she describes as allowing herself to “evoke personal flashbulb memories and translate them into something that can resonate more widely.” As with her work on natural phenomena, she does this by way of abstractions as opposed to literal representations.

These curiosities allow Devaux to superimpose abstract and distant material, fuse traditional forms with contemporary gestures, and blur genres, often combining electroacoustic techniques with romantic harmonies and juxtaposing contrasting melodic and harmonic skeletal elements from highly varied sonic sources. She deploys these techniques, she says, in the hopes of demonstrating what she refers to as “musical and generational inclusion.”

Among her influences, Devaux notes Italian composer Salvatore Sciarrino, whom she cites for his honesty, depth and directness, as well as the American experimentalist Alvin Lucier. She also mentions the Finnish composer Kaija Saariaho, whose orchestration and “exploration of noise as tension” have inspired her a great deal.

Devaux aims to discover what makes things sound beautiful. She parses out what draws us to sounds and reflects on the qualities we recognize (or do not recognize) as familiar. In short, when listening to her music, she hopes the audience will be “drawn in so as to feel as they belong in the piece.”

Devaux is not entirely comfortable with the concept. “This country is young, and has a complex history, one of indigeneity, colonization and immigration” she says. “I didn’t feel comfortable defining Canadian music in a broad musical sense.”

And so Arras tells her story, or part of it. It reflects her memories and backgrounds as a third-generation Japanese-Canadian on her mother’s side, whose father immigrated to Canada from France, and who belongs to an international community.

Through the indistinct and subtle layering of natural forms and patterns, recordings of French chansons and Japanese-North American folk songs, of Buddhist and Gregorian chant, and the rhythm of a loom, it tells a tale of growing up on the hills and fields of Alberta, of the sounds of her parents’ favorite records, and of her desire to communicate familiarity and memory through contemporary music. “When you are here, what you have in your life is Canadian,” she says.

The composition required lengthy research, consisting of family discussions and historiographical research, followed time spent figuring out which elements of her source material she found most interesting. It also required a detailed analysis of the collected data, which involved translation, spectral analysis, transcription and traditional analysis. She then dived into the more conceptual parts of building the work. The process was challenging in lockdown, with no option of bouncing ideas off of other people or even getting out of the house and working in a café.

Devaux started Arras by sketching the form and isolating the “aim” of the piece. She then went on to delineate sections and their roles based on the information she had collected. This process led to explorations of micro form, instrumentation, gesture decisions, and questions of how to represent various thematic elements.

All this information was then written out on a graphic score and fed into the computer, which enabled sonic manipulation. Devaux then wrote out the whole score on paper and “conducted [her]way through it,” taking note of things she wanted to add, adjust or change.

She then took to the piano to do “detailed work,” developing melodies and singing sections to herself. She describes this step as the more “traditional” part of the process, perhaps related to the composition of music for film and television. Finally, she put it back into the computer and re-made the graphic score. 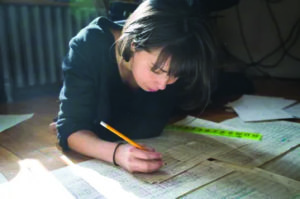 Arras seeks to create an “amalgamation of sonic identities,” as Devaux puts it, to “synthesize information, find commonalities and differences” and to establish her voice as one in which different sounds, experiences and musical identities collide. She hopes Arras resonates with listeners as something familiar. “I don’t want to alienate people,” she says, “I want them to attach themselves to part of it, to be engaged.”

Although Devaux wants to capture a large variety of sounds and experiences in Arras, she does not want to do so literally, or in such a way that leads to the assumption that all the elements are naturally cohesive. Instead, she paints a more honest and vulnerable portrait with sounds that have been altered or reproduced. Her goal is to appeal to the listener with sounds that are ever so slightly familiar.

After its premiere at the Azrieli Music Prizes gala concert on Oct. 22, Arras will be recorded for the Analekta label. Devaux’s works have been performed in Canada, France, Germany and Italy. She has collaborated with ensembles, choreographers and filmmakers alike, and received numerous prizes for her work. She is an associate composer with the Canadian Music Centre and president of the board of directors of Codes d’accès.

Devaux is looking forward to working with the NAC Orchestra as one of two “Carrefour” resident composers from 2020 to 2022. She is also working on a piece for flute and electronics for the Ottawa flutist Mark McGregor, as well as a work for the 2021 Ars Musica Festival in Brussels in collaboration with the ensemble Sturm und Klang.

Devaux is actively contributing to the Canadian compositional landscape in the only way she feels equipped to do so: “by saying ‘Well, this is who I am’.” She adds: “Hopefully, the next person will write who they are, and so on and so forth. That is what ‘Canadian’ music is.”