The Canadian Opera Company opened its 2018-19 season with a new production of Pyotr Ilyich Tchaikovsky’s Eugene Onegin, originally premiered by the Metropolitan Opera. It has been 10 years since COC last staged Eugene Onegin, and the strength of this production lies in the cast and production team with a strong Canadian presence.

The opera which is based on the classic Russian novel-in-verse by Alexander Pushkin tells the story of Onegin, a cynical and jaded urbanite, who rejects the love of the young Tatyana. After killing his friend Lensky, the fiancé of Tatyana’s sister Olga, in a duel that stemmed from a trivial quarrel, Onegin lead a life of aimless wandering, until his chance reunion with Tatyana years later. By then Tatyana has married into nobility. Onegin realizes he loves her and pleads with her to run away with him. Tatyana admits that she still loves him, but is steadfast in remaining loyal to her husband, crushing Onegin.

Bass-Baritone Gordon Bintner, a recent graduate of the COC Ensemble Studio, plays the title role. He was every bit haughty in Act I and II, but his singing was undermined by his stiff acting and lacked emotion. When he rejected Tatyana’s love, instead of showing complete scorn, he chose to display a hint of compassion for her. Canadian soprano Joyce El-Khoury’s pure voice aptly portrayed the young and innocent Tatyana. Though she has a powerful voice, she saved it for the last act when she used a more mature, coloured sound to play the more confident Tatyana who is now a married socialite. The duet between Onegin and Tatyana in the last scene was a captivating display of the characters’ conflict and turmoil. Both Bintner and El-Khoury acted convincingly, and sang brilliantly with luscious voices filled with emotions of passion for each other and anguish that they cannot be together. 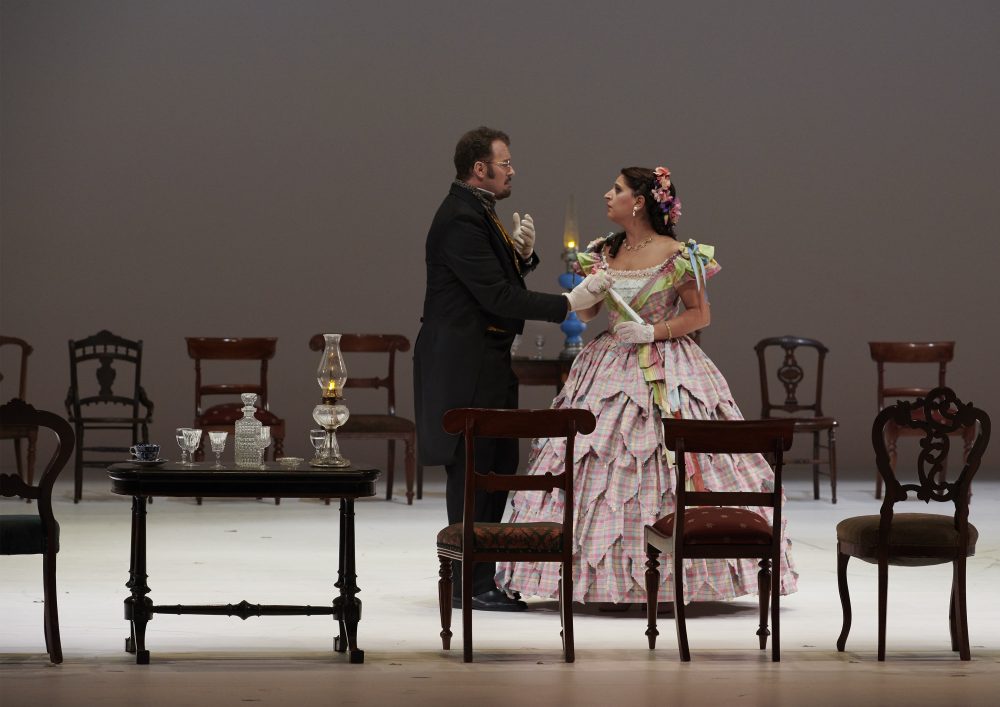 Tchaikovsky seems to have written some of the best melodic parts for Lensky, played by Canadian tenor Joseph Kaiser. He poured out his heart professing his love for Olga, and later lamented his lost youth and impending death, portraying both emotional roller coasters with a rich sound and beautiful phrasing.

The simple, minimalistic staging by Canadian Michael Levine was well-complemented by accents of colours from the period costumes and falling autumn leaves, and was brilliantly enhanced by the nuanced lighting that seamlessly transitioned the scenes.

The COC orchestra played with balanced accuracy and sensuality under the baton of Johannes Debus. Always the shining star of Canadian Opera productions, the COC chorus was terrific under the preparation of Sandra Horst.

Kudos to the Canadian Opera Company for showcasing so many fine young Canadian talents on its world stage.

Tchaikovsky’s Eugen Onegin. Until November 3 at the Four Seasons Centre for the Performing Arts, Toronto. www.coc.ca