By Christine Lee
Longueuil, July 14
The great thing about Longueuil’s International Percussion Festival is the array of different activities offered: a drum workshop, a dance workshop, stalls selling goods, a mini-museum, restaurants right by the street, concerts, and dance shows. As I wandered up and down the street, I even came across a circus performance of aerial silks.
Thursday featured a free performance by Bïa & Paulo Ramos with live painting by Brazilian painter Flavio Freitas. Brazil-born Montrealer Paulo Ramos and his band displayed a suaveness that captured the audience’s hearts straight away. The Latin rhythms made the crowd dance, clap and sway. There was even a dancer who blitzed across the stage with a flurry of quick-footed steps and taps—a true dancing Faust!

I managed to catch a glimpse of UPPERCUT, a woman’s urban drumming group, before they left the Hôte Zone stage. Next up was a dance intensive workshop presented by Bahia Studio. Evens Plissint, salsa director at the Bahia Studio School, riled up the crowd for the “best 30 minutes of our lives.” With the Bahia S.W.A.T. team—a group of dancers dressed in a flashy blue t-shirts—in the crowd, Evens and Francis Lafrenière, two-time finalist of So You Think You Can Dance, coached us in a simply choreographed funk dance. All too soon, the workshop ended, but Evens promised to return on Saturday, this time at the Loto-Quebec stage with a fleet of dancers, shows and new choreographies. 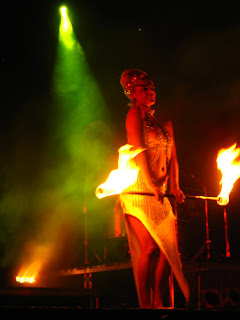 I had seen Insolita perform a song the previous night and was looking forward to their performance, but nothing prepared me for how brilliant and moving the show would be. The concept was “fire, water, earth, air” and they definitely delivered it. Dancers manipulated flaming fans and swung thick white cloths while drummers stomped in water as they played. Their costumes and make-up were exceptionally well-done and not only did the singers have powerful voices, but they also played bass and percussion flawlessly. Not to mention that there were four drum sets on stage! It was not surprising that the crowd applauded loudly and cheered for an encore. www.insolita.ca

I arrived early at The Cuban Martinez Show and the crowd had already gathered around, itching to dance. When the show started, the audience exploded into action. The Cuban Martinez show has an impressive band that includes guitar, trombone, bass, drums, percussion, singers, keyboard and trumpet. This lively act churned out irresistible Cuban jazz fusion.
If you mixed tap dancing, drums, a bass, a synth backtrack, and some vocal elements together, you would get Pec Percussion. Behind all this is Frédéric Gauld, a young man with a bright smile and a strong sense of rhythm. I met up with him after the concert.
Such a physically demanding performance must be really difficult, so I asked him how he does it. Still slightly out of breath, he explaains: “My approach to rhythm is very organic. I like to work with my muscles, my body and my anatomy. If you think about it, rhythm is really an intricate part of living and of our physical being. Just think of your heartbeat, the steps you take when you walk: this is all rhythm and part of your daily life. So if I were to play rhythm ignoring these things, I would be missing out on a lot. When your body becomes part of the rhythm, your arms, your legs, your breathing, you really feel like you’re part of something bigger and capable of doing more.” www.pecpercussion.com
The night continued with Martin Deschamps, a hardcore rocker with a strong voice, and Brazilian painter Flavio Freitas in a non-stop energetic performance. Martin had a lot of surprises in store for us, including playing drums and bass. He danced along and played air guitar, owning the stage like no one else. It was a pleasure to watch him have so much fun on stage; it was contagious! www.martindeschamps.com 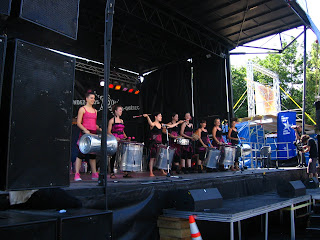 Maloukaï, a female drumming group, was founded in Montreal in 2005. Though many of its original members have left, the group still has eight members: Nancy Saviskas, Josée Mercier, Marise Demers, Nadia Essadiqi, Anne-Marie Kirouac, Isabelle Delaney, Sandra Laine and Christine Rouillard. They perform original material and original choreographies. In 2010 they won the Desjardins de la Relève contest for best musical group and were awarded a show on the Loto-Quebec stage this year.

I spoke with Anne-Marie Kirouac about their performance.

“It’s good to get new people to… discover what percussion instruments are and the music that they can produce. For example, about Maloukaï, some people might be thinking, ‘My gosh, an hour of music with only percussion? How could I possibly listen to that?’ and we try to show them that there are different things that we can do with percussion: shifting the rhythms, mixing the timbre, and creating new instruments with objects like garbage cans. And that, no, they won’t get bored listening to us.
“We try our best to create musical pieces that are different from each other because we know that we don’t have a thousand instruments that we can use, so at some point there will be sounds that will be repetitive. So we always try to bring in new styles and I think we were able to do that today,” she says.
Upcoming show: Saturday August 6th at 7:30pm.  “Les Samedis percutants” Chambly, Quebec. www.maloukai.com