By Christine Lee
Longueuil, July 13, 2011
This year marked the tenth anniversary of Longueuil’s International Percussion Festival. Its new stage, dubbed the “Hôte Zone,” hosted an array of brilliant artists and musicians, including performances by Arashi Daiko, Normand Brathwaite, Insolita and the Orchestre Symphonique de Longueuil. Every day of the festival was dedicated to a particular country: Thursday celebrated Brazil; Friday, Cuba; Saturday, Guadeloupe; and Sunday, Spain. 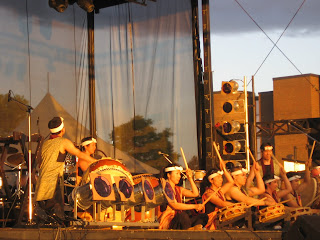 I met up with Arashi Daiko after the performance.
“We’ve been invited guests at LIPF since its first edition,” Mikio tells me.
I asked Jean-François what he thought about the evolution of the festival. “Well,” he replies, “it started off in a park in a really small venue, and then it went on to a bigger place, with more shows, more musicians, and better known musicians. Last year, all the activities were free. They had more stages and lots of performances going on in the street. So it’s a completely different kind of concept.”
As for the secret behind their energy and on stage, Sandra, another member of the group, confides: “I think it’s because it’s not our job [to play taiko], so everyone is doing it because they really love it. It’s a passion for all of us. [Arashi Daiko] is a community and a volunteer group, and the money we raise is for maintaining our equipment and traveling.”
Michio, a member for 10 years, adds: “It takes energy, time and dedication to become a member of Arashi Daiko. Devotion and hard work. We must sacrifice our Friday nights and most of our Saturdays to practice. We’re pretty much family.” He laughs. www.arashidaiko.org
After Arashi Daiko’s opening performance, the crowd greeted Normand Brathwaite and the many artists that would grace the stage in the following days. Martin Deschamps, Insolita, and Bïa, all gave a sneak peek of their performances to come.
Amid a sky full of fireworks, rhythms and music filled the cool night air and captivated the cheering audience. It was a magical, memorable night.
Read Part 2 of Christine’s reviews and interviews at the LIPF here
Read Christine’s interview with LIPF co-founder France Cadieux here