You are at:Home»Classical Music»Vocal»Art Song»Mozart & Salieri Are at It Again, at dell’Arte Opera Ensemble’s Festival 2018
Advertisement / Publicité

This company is ready to rumble.

Call it the Thrilla from Vienna: Wolfgang Amadeus Mozart and Antonio Salieri, that most bruited matchup of 18th Century musical titans, is slated for a redux this month – this time in 21st Century New York, courtesy of the dell’Arte Opera Ensemble.

With a nifty roster that includes a full production of Mozart’s magnificent Don Giovanni (in the 1788 Vienna version) as well as the virtual resurrection of Salieri’s rollicking and unjustly forgotten 1789 comic opera La cifra (“The Code”), plus two other programs of operatic excerpts and vocal pieces from the tangling twosome, the dell’Arte Opera Ensemble is shining a brilliant light on the similarities and contrasts between these two exemplary practitioners of classical vocal music at the pinnacle of its verve, virtuosity and popular sway. 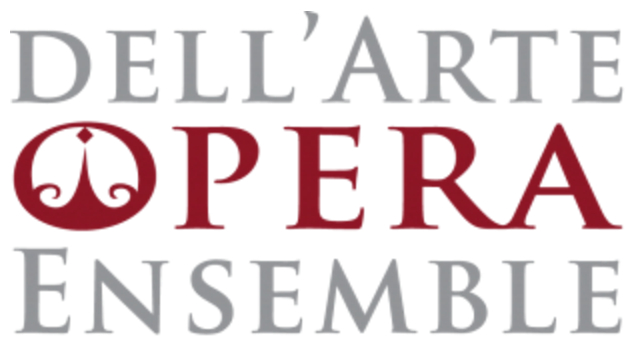 Oh, and, as a bonus, the company will perform 1897’s “Mozart and Salieri,” a one-act, two-character opera by Rimsky-Korsakov based on an 1830 verse drama by Russian poet Alexander Pushkin dramatizing not only the putative rivalry between the composers, but a speculated climax of jealousy-driven homicide. It’s the ur-source of the same scandalous material that playwright Peter Shaffer (and subsequent filmmaker Miloš Forman) would spin into gold nearly a century later with Amadeus. Who knew?

Of course, the whole notion of fierce enmity between the composers is (probably) arrant balderdash – at least insofar as any reliable documentation is concerned.

“The more I read, the more I see that they were mostly professional colleagues,” says maestro Chris Fecteau, dell’Arte’s co-founder and artistic director, though he concedes that the two men were of such contrasting temperaments and personalities that a clash might well be expected.

Mozart was “the young prodigy, isolated from normal childhood,” says Fecteau, adding: “I can’t imagine him not being a bit strange”; while Salieri “was Mozart’s boss. He ran the Italian Company at the Court Theater, and he understood that to be successful meant to play by all the court rules. I think he understood the business side of things in a way that Mozart didn’t care to understand.”

But “I personally don’t think Salieri had anything to do with Mozart’s death,” Fecteau says. 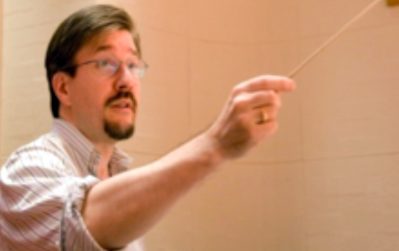 Still, whispers have been rampant practically from the moment of Mozart’s premature 1791 demise, at the age of 35. Did Salieri – who far outlived his younger contemporary – ever address the rumors?

“I doubt he did,” says Fecteau. “I can’t imagine him ever deigning to do so” – reticence that well may speak to Salieri’s dignity and reserve. But, then again, it’s also a tack that might comport well with a cagey culprit wary of self-incrimination. Either way, as Fecteau notes, “it makes for great drama!”

The dell’Arte Opera Ensemble’s performance festival – which this year runs from August 11 through the 26th – is the annual culmination of a year-long effort on the part of Fecteau and company co-founder Karen Rich (who is also Fecteau’s wife), to create a unique and invaluable professional training and development program for promising young operatic artists. Since 2000, the couple has been mounting and elaborating the yearly program – laying complex creative and logistical groundwork in the fall, conducting first-round auditions in January, with callbacks in February, ensemble selection and casting in March, and commencement of multi-faceted training and coaching sessions in April, all of it geared toward public performances in late summer. 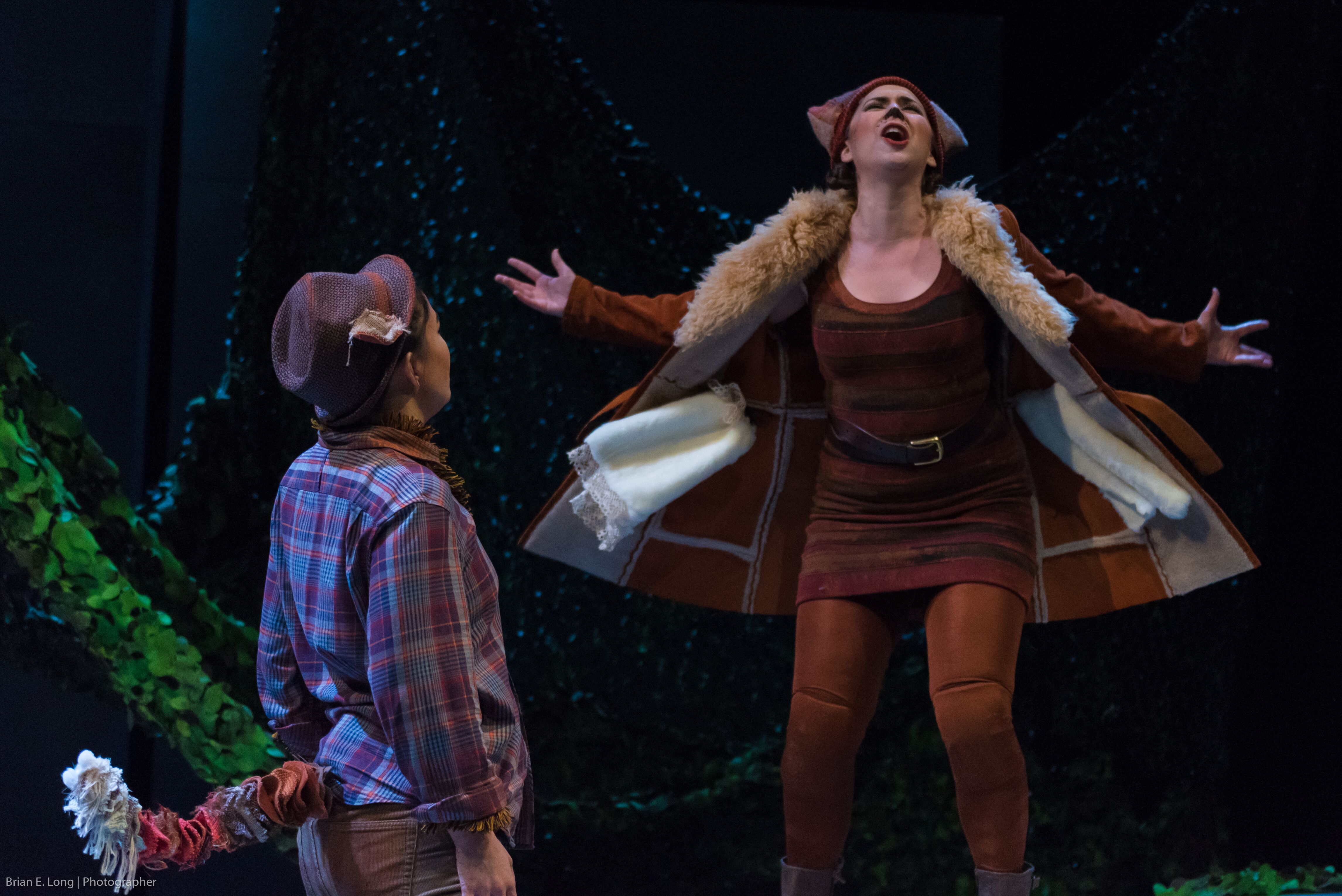 It’s an experience unlike most any other currently offered to aspiring artists on the cusp of launching or ramping up professional careers. While most young artist programs are auxiliary to the performance season of a larger production company, dell’Arte uniquely centers exclusively on the development of the young artists themselves.

The closest correlative Fecteau sees are the “role class” programs offered by the Martina Arroyo Foundation, “with the big difference being that her singers need to show up to rehearsals pretty far into their process,” he says.

“We like to grab people right at the beginning – intervene and help guide them from the first notes they’re learning and from their first study of the libretto” – to which end, the company provides movement classes, diction classes, language classes, vocal coachings, and role preparation sessions, as well as later staging rehearsals.

The program evolves each year. “This year we offered an Italian recitative class that I think made a big difference,” Fecteau says.

Chosen participants never pay to participate; in fact, ensemble members receive a stipend to help offset living costs during their months of training and rehearsal. It’s a classy operation free of ostentation, emphasizing the cultivation of potential over connections or résumé, work ethic over ego, substantive and supportive training over production frills or glamorous company profile. 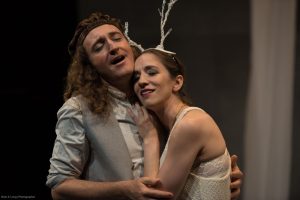 “Over the years, we’ve learned to recognize the people who will fit what we’re trying to do,” says Fecteau. “It is a training program – a place where people let us really work with them.  We’re not trying to pick the person who could do the best Giovanni or Elvira or whatever right out of the box, but somebody whom we know can make the most of the journey from day one through to the performances.”

And it’s paid off in word of mouth and company reputation. Of the 2018 ensemble, Fecteau enthusiastically avers that “it’s definitely the most talented crew we’ve had in all the years we’ve been doing this. A good number of alumni are back, some from last year and some of from several years back. It’s really fun to see the growth over the years.”

A fly-on-the-wall audit of some recent dell’Arte prep sessions offered palpable evidence of the energy and enthusiasm behind the coming festival performances. A spirited Fecteau conducted a first full orchestra work-through of the Don Giovanni score, eliciting a gorgeous sampling of the celebrated sound palette Mozart lavished on the tale of the remorseless libertine fated for a final assignation in Hell.

Stopping here and there to fine-tune passages, Fecteau was met with a show of collaborative engagement rarely glimpsed among typically taciturn classical instrumentalists.

In the next studio, La cifra’s stage director, Brittany Goodwin, and musical director, Catherine O’Shaughnessy, worked through a piano-accompanied staging rehearsal of Act I. The dell’Arte ensemble was in gloriously full voice as they whirled at sometimes breakneck speed through the plot-rich action. 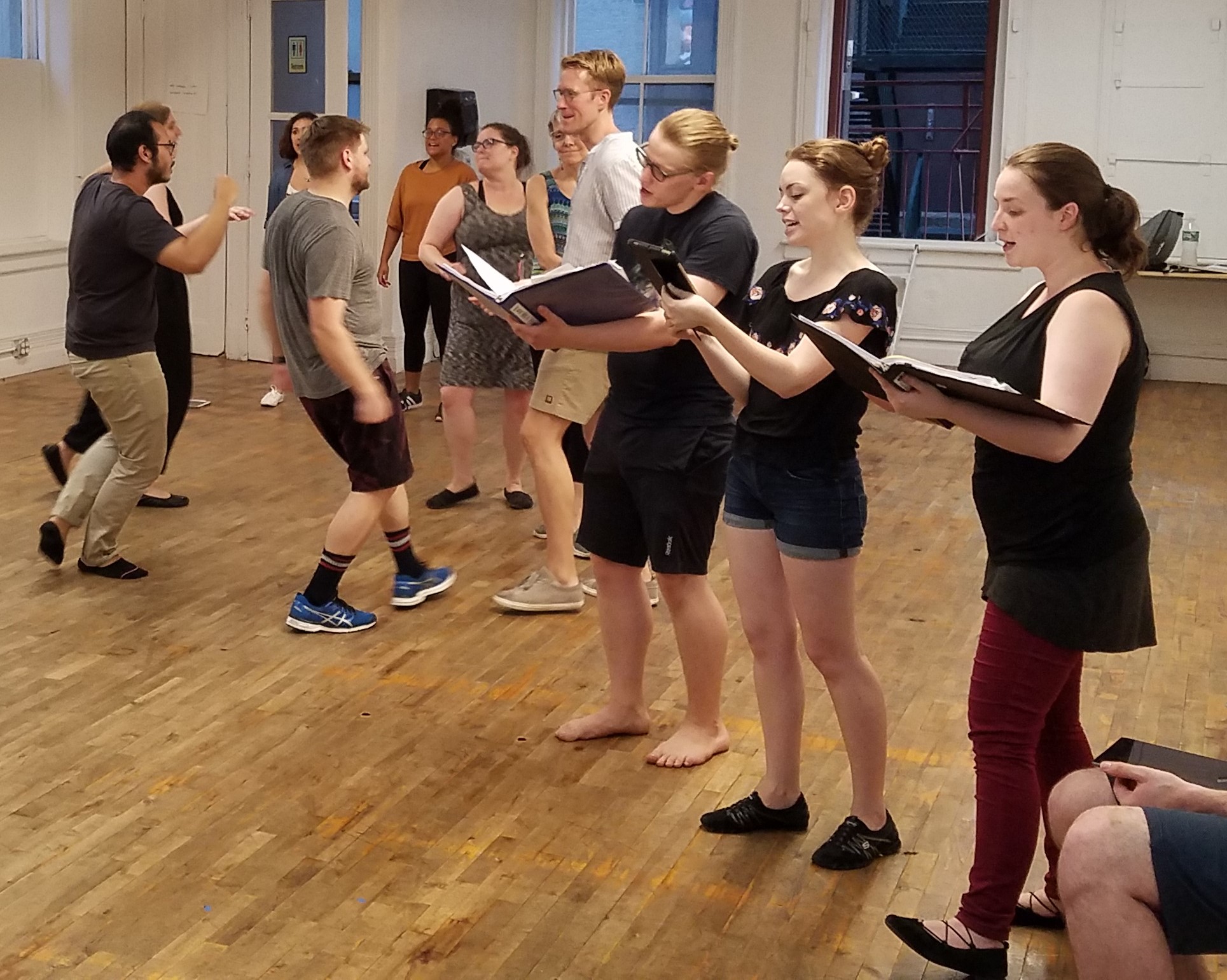 “Reading the libretto, commedia characters were jumping out at me,” Goodwin says, referring to the robust tradition of Italian folk comedy. “So I went back to my roots in commedia dell’arte training. We went over the commedia parallels, the physicality and the ‘shtick,’ to find the best way to make it all snap, crackle and pop, while still maintaining the beautiful musicality.”

For her part, musical director O’Shaughnessy found unexpected and welcome surprises in Salieri’s score, too. “It feels like an anticipation of bel canto. Even the tempo is a little more flexible than I would say is usual in Mozart. La cifra is, I think, part of the missing link between classicism and bel canto.”

And then, there’s the fact that, to all extents and purposes, this production of La cifra is tantamount to a latter-day world premiere.

“There are no recordings,” O’Shaughnessy observes. “There are two arias that have ever been recorded. It’s been a process of putting it on its feet while we’re still getting it into our ears and our bodies. That’s what’s really special about it, too. We remind ourselves that this is what the original company went through.”

Not coincidental, on the other hand, is one added ingenuity in the pairing of Don Giovanni with La cifra. Both operas boast a libretto by a single author, Lorenzo Da Ponte. Rake, adventurer, man of letters and scandals, Da Ponte is the third fascinating, outsized 18th-century figure looming large in dell’Arte’s 2018 season.

Most famous, perhaps, for having provided the texts for three of Mozart’s greatest operas (Le nozze di Figaro, the year before Don Giovanni, and Così fan tutte two years after), Da Ponte actually collaborated more than twice as often with Salieri – six operas in all, including La cifra.

But Da Ponte’s notoriety rests on remarkably broader ground, too. His was a life of picaresque extravagances and unlikelihoods: from Jewish-Italian birth heritage to later ordination as a Roman Catholic priest; from an early friendship (in Venice) with the infamous Casanova, to a later friendship (in New York) with Clement Clarke Moore (author of “’Twas the Night Before Christmas”); a life of rampant womanizing (e.g., after messing around with the girlfriend of his Viennese dentist, the latter prescribed a mouthwash that “less than a week later made all of Da Ponte’s teeth fall out,” says Fecteau), itineracy, and frequent brushes with bankruptcy. And Da Ponte crowned it all as the rightfully celebrated father of Italian literary studies in America (becoming a fabled language instructor at New York’s Columbia University and contributing an unparalleled library of Italian books).

And, if there was, in fact, friction between Salieri and Mozart, Fecteau speculates that Da Ponte may have been at least one unwitting cause of it. Da Ponte first offered the libretto that would become Così fan tutte to Salieri, who set a mere four pages of it to music before he “handed it back to Da Ponte and said no,” Fecteau narrates. “Then Mozart came up with a masterpiece! That might have been the start of some jealousy.”

The Così affair inspired Fecteau in his structuring of the Mozart and Salieri scene excerpts program, “Vignettes from Vienna,” which dell’Arte will present on August 20 and 21, as an adjunct to the full productions of Giovanni and Cifra.

“Salieri will come out and sit at the keyboard,” Fecteau explains, “rehearsing his fragments from Così as though he’s testing them out. And then reject them – reject his own work!”

Similarly, the performer playing Mozart will follow with a presentation of his own excerpts from the successful Così. The cage match will continue with selections from Salieri’s own 1799 opera, Falstaff; Mozart’s Le nozze di Figaro; and, of course, that scandal-mongering Rimsky-Korsakov snuff opera.

UFC, eat your heart out.

A final offering of dell’Arte’s season will be a recital of nonoperatic vocal works by both composers: “Sacred & Profane: Songs & Ephemera of Mozart & Salieri,” to be presented one-time-only on the afternoon of August 25. Depending on the temperaments and volubility of contending audience partisans, it’s anyone’s guess how “profane” the proceedings may become. But a not-to-missed highlight will be the 1785 cantata Per la ricuperata salute di Ofelia, which boasts music by both Mozart and Salieri, and a text by – yes – Lorenzo Da Ponte.

For the second summer in a row, dell’Arte’s performance festival will be housed in the spacious Ellen Stewart Theatre at LaMaMa in New York’s East Village – a luxurious expanse of black-box space in which directors’ and audiences’ imaginations can run riot.

“I love the space,” Fecteau says. “This is the place we’ve been looking for, for as long as we’ve been doing the program. It’s got just the right sense of raw space, and a really fantastic vibration that I think everybody picks up on.”

So…. Mozart vs. Salieri – come thrill to the musical fireworks, savor the consummate artistry, and root for your champion, as Bad Boy Genius and Court Composer Par Excellence go at it again.