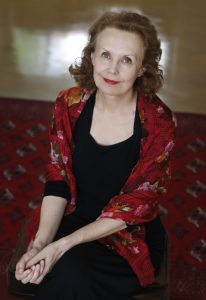 Meditative, poised, sly, and slow-burn, L’Amour de loin oh so gradually grows to dramatic ripeness. Its music glimmers, undulates, bewitches – as fluid in its variety and moods as the play of sun and moonlight on the Mediterranean. But the opera hangs full fire until, ultimately, it knocks you back with its hidden emotional and existential wallop.

This elegant and profound French-language work by Finnish composer Kaija Saariaho, with libretto by Lebanese novelist Amin Maalouf, has been accruing international kudos through more than a decade and a half of varied productions – from Salzburg (where it made its world premiere in 2000) to Santa Fe, London, Toronto, Québec. The current iteration – a co-production with Opera de Québec – is staged by Canadian director and theater visionary Robert Lepage. It was first given (with a mostly different cast) at the Québec company’s Festival in August 2015, and now makes its Metropolitan Opera debut (viewed here on opening night, December 1), arriving in New York at a fortuitous juncture – in a city, a nation, and a time aching for any balm of beauty, idealism and civility.

The title, L’Amour de loin, translated “love from afar,” could be construed as a description of any modern operagoer’s relationship to the story itself – this is quite literally a love story from long ago and far away, based on the life of 12th-century poet Jaufré Rudel. But Rudel’s “amor de lonh” (in the poet’s own antique Occitan spelling) is actually a rich and polysemous concept, with layers of meaning that are slowly disclosed through the course of the opera.

A minor prince from French Aquitaine, thought to have perished in the Second Crusade, Rudel also happened to be among the finest troubadours of his time. Details of his life are largely displaced, however, by a legend about him, preserved in only a single, haunting paragraph – a vida breve composed anonymously some time after Rudel’s death – and it is this legend, and Rudel’s verse explorations of his “love from afar,” that provides the stuff of the opera’s plot. 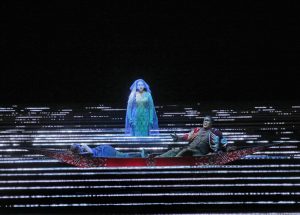 It’s a tale simple in outline. Princely troubadour Jaufré Rudel renounces pleasure in favor of a chaste devotion to idealized love. He composes etherealized tributes to a perfect, unattainable – and presumably fictitious – lady. This poetic solipsism is breached, however, by a Pilgrim returning by sea from the Holy Land who informs Jaufré that the lady of whom he sings is not mere fancy, but actually exists – the Pilgrim has seen her, in a far-off land – the Countess (called Clémence in the opera) of the Lebanese crusader state of Tripoli. The prince obsesses over this weird and heady development.

Acting thereafter as self-appointed go-between, the Pilgrim sails again to the East, apprising the Countess of the prince who adores her from afar. Clémence is at first confused, even scandalized. But when the Pilgrim sings her the songs the prince has composed about her, umbrage yields to intrigue and, eventually, reciprocation. The Pilgrim sails again to the West and informs the prince of the lady’s interest. The prince is now appalled – how could his confidence have thus been abused? Yet he, too, wants to hear everything the Pilgrim has to tell about the lady’s reaction to his love from afar.

And so it goes.

“I enjoy the sweet song of the birds far away,” Rudel sang in his “Lanquan li jorn,” one of the mere handful of his beguiling pieces that survive. “And when I am parted from their song, the parting reminds me of a love far off …. / … No other joy so pleases me as the thought of love from afar.” The potent melancholy fully persuades, even across time. This was a sincere afflatus of a chivalric culture that prized the purgative power of unrequited love, love hopeless and distant and chaste.

Many subsequent eras of Western culture have seemingly all felt pangs of ambiguous nostalgia – even envy – for this chivalric ideal (as witness Cervantes in the 17th Century; or even later works inspired directly by the Rudel legend, penned by the likes of Browning, Swinburne, and even playwright Edmond Rostand).

But what can Rudel’s self-inflicted romantic anguish mean to a 21st-century audience? Isn’t it sheer emotional masochism to revel in thwarted desire, especially given that we’ve now transcended all prior historical problematics of absence (haven’t we?), shattered all shackles of distances via technology, instantaneous communication, virtual reality?

Perhaps, perhaps not. Much the way historian Barbara Tuchman – in her 1978 work, A Distant Mirror – proposed an historical and sociological parallel between the turmoils of the 20th Century and those of the medieval world (in her case, the “calamitous” 14th Century), so Saariaho may have discerned a more spiritual or existential correlation between the world of her 12th-century troubadour and contemporary, digital-age anomie. Chivalric imagination and verse were the virtual reality of Jaufré Rudel’s time. But its practitioners at least grappled squarely with the irreducible realities of absence, existential aloneness, even death. Do we? 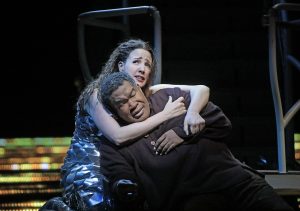 “I wanted to write an opera about love and death,” Ms. Saariaho has said, “because they are the great mysteries remaining to us.” And such are the abiding, and profound, predicates of L’Amour de loin.

While the opera’s first half has a certain touch of charming naïveté – a sort of adolescent-crush romance; a medieval Priscilla/John Alden/Miles Standish saga – an audience is rightly entitled to suspect that exigent developments will arise later on. No spoilers will be permitted here, but it’s fair to note that the opera’s second half does begin with an alarming, extended, sonorous brass choir, boding darkly of turns ahead.

But L’Amour de loin does not bristle with external conflict nor overt drama. Rather, the opera’s gradual disclosure of its own structure – mirrorings, pairings, slightly asymmetrical correspondences between scenes, situations, and musical sequences – constitutes the true ground of the action. There are only the three principal characters – Prince, Pilgrim, and Lady – though they are commented on and sometimes engaged by a largely invisible, nigh-spectral double chorus, male and female, ambiguously termed “companions.” It is the controlled and shifting geometry of the three principals, always foremost and in high relief, that most richly rewards an audience’s close observation and forms the lived dramatic experience of the opera.

Indeed, the opera’s depopulated universe – the deceptively modest chamber-opera triad embedded in its big orchestral and choral superstructure – carries an almost post-apocalyptic, “last people on Earth” feeling with it, reinforcing and rendering ultimately inevitable a perception of the entire tale as profoundly allegorical. The observer finds warrant for a unified field theory in which these three figures are arguably aspects of a single, universal soul – a soul whose alienation is being operatically anatomized.

And the anatomy is in the music. Kaija Saariaho’s burnished, hypnotic and complex score is a metaphysical excursus writ in sound. It is also remarkably discreet, as much a monument to restrained good taste as a miracle of varied and inventive aural evocation. The sizable orchestral forces are worthy of Wagner or Strauss; the music is exotic, often modal (or, rather, casts a quasi-modal spell, with ad hoc neo-medieval scalar progressions invented by Saariaho). There are fascinating and subtle percussive and electronic effects folded into the mix. Yet, for all that the work is one of enormity, solid innovation, and craftsmanship, very little of it could be regarded as flamboyant. Saariaho appears to be that rare creative original free of any overweening urge to show off.

Bass-baritone Eric Owens brings rich and noble sonority to the role of Prince Jaufré, while convincingly managing the tension between high-minded ideals and quicksilver romantic impulse. His gradual, bewildered yielding to desire is nicely calibrated, and his desperate belated regrets are beautifully heartbreaking.

The Countess Clémence is defined with nuanced vocal sensuality by soprano Susanna Phillips, who consummately traces the character’s progression from aloof refinement through raw passion and eventual spiritual transport.

The role of the Pilgrim is the opera’s most enigmatic. While conventions surrounding ill-fated lovers are familiar, the trope of the presumably selfless and disinterested mediator is something of a novelty, and rendered all the more provocative by Ms. Saariaho’s choice of vocal type and concomitant gender indeterminacy for the role. Mezzo-soprano Tamara Mumford (who also played the role in Québec) fully rises to the challenge, offering simple yet canny elegance, muscular androgyny, and gorgeous vocal purity. 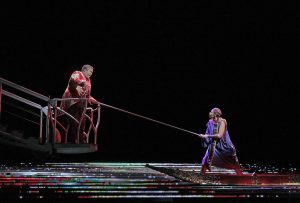 Québec-born director Robert Lepage has staged L’Amour de loin with exquisitely measured nuance, fashioning plasticities and configurations among the characters that underscore their evolving relationships while admitting minimal kinetic intrusion into the opera’s largely internal spiritual flux – a modicum of physical humor here (as when Jaufré and the Pilgrim tussle a bit with the latter’s push pole), an access of decorum-shattering anguish there – but, mostly, a brave and condign assay of composure, mesmerizing placidity and mysterious stillness.

But Lepage has also conspired with designers Michael Curry (set, as well as costumes), Kevin Adams (lighting), Lionel Arnould (“lightscape image designer”), and Mark Grey (sound) to place the restrained action within a vast, ever-shifting pelagic dreamscape. At times, miniature models of the Pilgrim’s skiff, or seabirds, or flying fish, move across this sea of light, skewing perspective and prompting thematically consonant illusions of enhanced distances. The entire playing space is ranged by horizontal bands of thousands of tiny and intricately programmed LED lights, evolving through myriad hues and patterns in sync with the shades and temperatures of the score. And dominating this pulsating, fluid field is a single, nifty piece of technology – a sort of bridge between two platforms – sturdy, industrial, high-tech. It resembles an open-construction, scaled-down version of the Hubble Space Telescope as it skims, twirls, tilts and glides about the stage, transporting the Prince and the Countess in zodiacal counterpoint while maintaining rigid distance between them.

And indeed, a bit of star-gazing metaphor is not amiss here; for, despite the general sea-dominated ambiance, there is a crypto-celestial context to all the proceedings, hinted at in the opera’s opening tableau, revisited at points thereafter, and dominating the transcendent finale.

“Why is the sea blue?” the Prince asks the Pilgrim early in the second half, as one senses the opera moving inexorably into more fateful territory.

“Because it is the mirror of the sky,” the Pilgrim explains.

“Because it is the mirror of the sea.”

Far from mere whimsy, the opera here adumbrates its culminating insight, which Saariaho finally realizes in ravishing music for the Countess Clémence. It is she who achieves the opera’s richest intuition about loss, absence, sufferance, and about longing for love from afar.

One should be prepared for the ideas and the latencies of this opera to germinate in the imagination, and for the sounds of L’Amour de loin to echo in memory long after leaving the opera house.