You are at:Home»La Scena Online»Concert Reviews»A Diva, a Divo – But Which is Who? You Decide, as Opera Philadelphia’s “Two Queens” Switch it Up
Advertisement / Publicité

Be it stipulated:  mezzo-soprano Stephanie Blythe can do just about anything – and apparently will!

That includes slapping on her Baba the Turk beard and ‘stache; strapping on – ahem – a magnificent Greek warrior cuirass and plumed helmet; and belting out just about the entire bel canto and romantic tenor songbook – plus a raft of pop and show tunes, to boot – all in raucous consort with Philadelphia’s premier drag performer, “Martha Graham Cracker” (a.k.a. Dito van Reigersberg when in his civvies).

All of this fresh off the recent triumph of Blythe’s title-role performance in Opera Philadelphia’s Tancredi.

The event was Two Queens, One Night (wittily subtitled “Dito and Aeneas”), a special one-time add-on to the current Opera Philadelphia performance season that proved to be a delirious, profane and ingenious hybrid of musical and theatrical hijinks – part classical recital, part zap-cabaret, part olde-time imtermedio, part Webster-Hall-style blowout. And nothing that one might expect in any regular opera subscription. 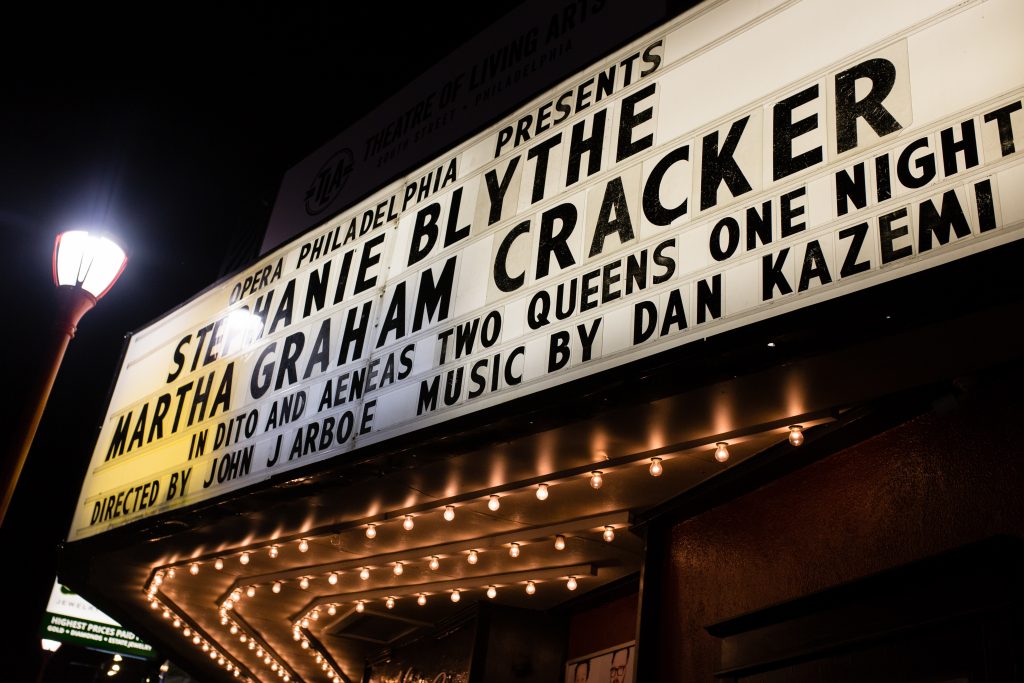 “This is not your grandmother’s opera company!” exulted Opera Philadelphia general director David B. Devan after the show, addressing the crowd from atop a rolling burlesque-style runway and wearing a pert white wig reminiscent of Judy Jetson, making him the very embodiment of his own point.

Part of what enables Opera Philadelphia’s varied, adventurous and extensive programming – besides bold leadership and supportive audiences – is its light operational footprint. With no theater of its own to maintain, no conformance to the specs of a single physical plant to observe, the company is able to collaborate promiscuously and dart city-wide, sponsoring truly heterogeneous seasons housed in venues of broadly divergent sizes and demographics – chamber opera at the Kimmel Center; grand opera at the historic Academy of Music; crossover or experimental work at the Prince Theater….

And then there’s Two Queens, One Night. Where else would an opera company exhibit such a rara avis but at Philadelphia’s popular Theatre of Living Arts (or TLA)? Located in the city’s hip Headhouse District, this venerable 1908 nickelodeon palace, oft-since-repurposed, is at present incarnate as a gritty-chic alt-scene wonderland of glam murkiness – a stage, a dance floor, ornately balustraded staircases leading to galleries above, hidden bars tucked here and there, and alluring canoodling corners everywhere.

It’s where any Two Queens might be destined to rendezvous. 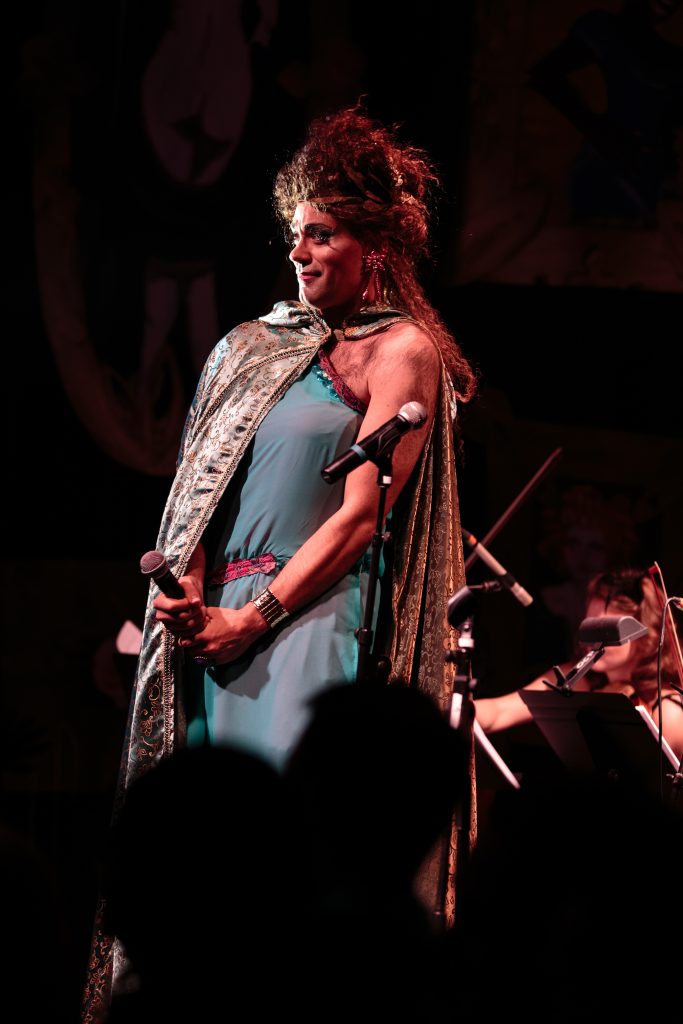 In essence, Two Queens, One Night is a madcap, cross-dressing musical love story carried along by the felicitous confluences and flamboyant clashes of its mixed genres.

Upon arriving, one mingled with gadding throngs of masquerading Cleopatras and Midases (attendees were encouraged to wear kingly or queenly attire of their own devising). Drink specials circulated around the dance-floor level – and food was distributed to more elite donors at onstage cafe tables or in the golden horseshoe above – as a string quartet performed a series of maritime and sea-scented pre-show music: “Come Sail Away,” “Somewhere Beyond the Sea,” “Bridge Over Troubled Waters,” and even Adele’s “Rolling in the Deep.”  The reason would become clear.

After an intentionally ill-rehearsed and campy prologue, played by allegorical drag figures embodying Sea and Wind (the latter making much of his/her proclivity to “blow”), Blythe’s character enjoyed an awesome reveal on a revolving platform. There s/he was, the warrior demigod, resplendent and smoldering, a pulchritudinous piece of drag-boy-bait exuding brooding, Miles-Gloriosus machismo.

Then, Graham Cracker, in winsome swords-and-sandals drag, materialized in a picture frame on the distant gallery above, while Blythe sang a magnificent “recondita armonia” (can her full performance as Cavaradossi be far off?). Cracker responded with a creditable rendering of Purcell’s “I Am Pressed with Torment” from, yes, Dido and Aeneas.

The sustained action of the performance consisted of Graham Cracker/Reigersberg’s determined efforts to reach Blythe – to bridge the gap between them physically, musically, and stylistically. Cracker, in an apotheosized version of her inveterate drag persona, was the evening’s lovelorn heroine, Martha – here a kind of philistine island goddess of purely pop sensibilities who finds herself suddenly and unaccountably smitten by the magnificent but distant classical voice of Stephanie Blythe’s character du soir – the mock-heroic warrior troubadour Blythely Oratorio. Perhaps in sublimated parody of L’Amour de loin, Martha finds herself separated from Blythely by a sea represented by the audience itself (dancefloor onlookers were given pennants to flail about, symbolic of sea-swell, during moments of dramatic turbulence).

Cracker sang George Harrison’s “My Sweet Lord,” to Blythe. Blythe sang “M’appari tutt’ amor” from, of course, Martha. There were crooned love letters dispatched, musical calls and response, and a generally full-throated free-for-all of a playlist that included “Could it Be Magic?” (“Baby I want you now!)”; “Celeste Aida”; 10,000 Maniacs’ “Verdi Cries”; Roy Orbison’s’ “Anything You Want (You Got It)”; a loopy boogie-woogie version of Mozart’s “Queen of the Night” performed by Graham Cracker; and a fiery, quarreling-lovers’ rendition of “A Boy/Girl Like That” from West Side Story.

Of course, the evening featured a good deal of patter and gags, too – some of it predictably quite bawdy, since what drag show could fail its obligatory miscellany of ribald double-entendres and cringeworthy phallic puns? (Martha at one point attempts to reach Blythely via GRNDR: “the gay GPS,” she explains, “that helps you not only go someplace, but also …” etc.). But there was also much that was winningly theme-specific, as Martha’s repeated panegyrics about the unintelligible opera in which she first heard Blythely’s voice (the title Tancredi was mangled as Tacre-diddy and Tancred-doodle-dandy, while Martha nonetheless gushed over Blythely’s “vibratory” timbre).

At length, Martha resolves to prove her devotion by subjecting herself to a full-on operatic death. Abetted by two accomplished backup singers, she tries staging her own personal Götterdämmerung-style self-immolation, to the strains of Elvis’ “Burning Love” (“I feel my temperature rising!”). 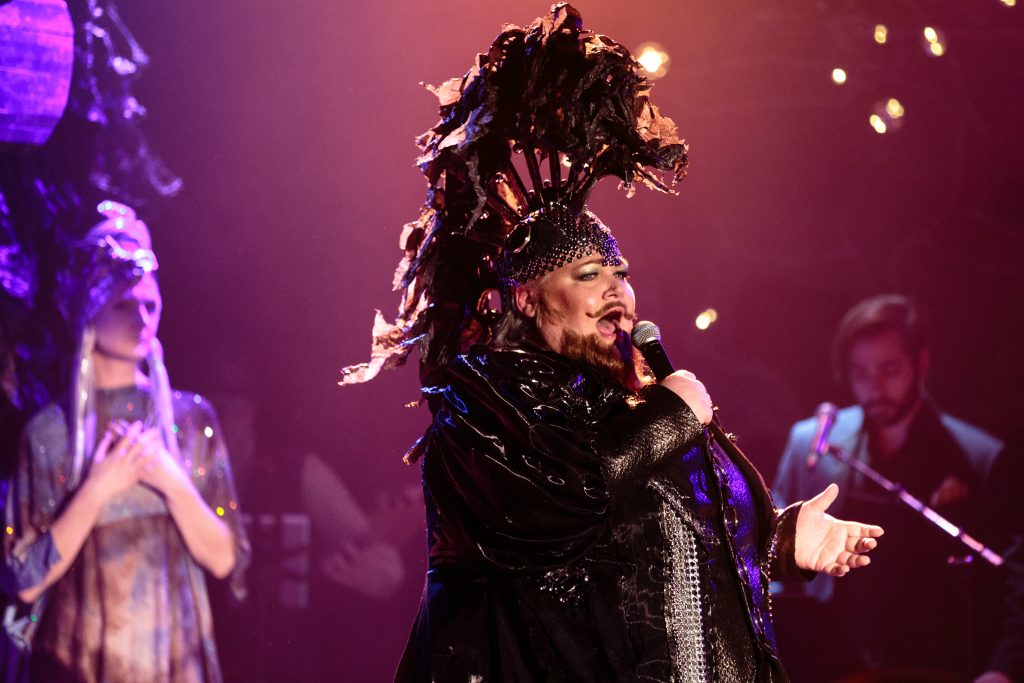 Of course, van Reigersberg/Graham Cracker was fully in her element, crooning and cutting up amidst the TLA’s freewheeling nightclub ambit. The real revelation and delight here were in Stephanie Blythe’s combined technical mastery and charismatic comic abandon. She proved to be a riot – improvising, deadpanning, hamming it up, wailing away. At one turn, she was hilarious in a bit about her inability to break the proverbial “fourth wall”; at another, brilliant in a routine about trying to shed her habituation to transforming dialogue into operatic recitative.

Most wondrous of all was Blythe’s gradual genre shift, moving from opera into show music, pop, rock and disco. When she and Graham Cracker eventually succeeded in meeting climactically at the center of the dance floor, engaging in a passionate kiss, they let loose with an equally passionate vocal duet medley, including a searing-hot performance of Bob Seger’s “We’ve Got Tonight (Babe, Why Don’t You Stay?).” 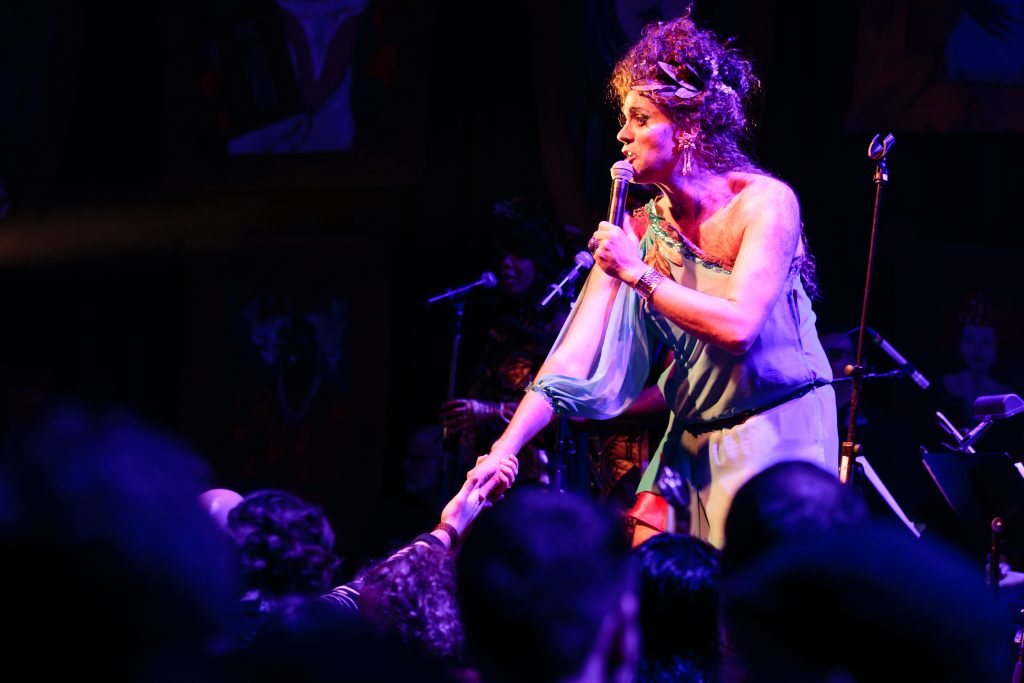 Blythe and Reigersberg have authentic chemistry. Like peanut butter and pickles (google it!), it’s a combination that shouldn’t work, but does, deliciously. Their mutual musical trust was palpable and their unfettered joy in the work infectious.

But, really, Blythe’s cabaret proficiency and versatility ought come as no surprise. Blythe has presented many concert performances of her American Songbook program during which she encourages audiences to join in, and she has played many a club venue with her own acclaimed retrospective of and performance as the legendary Kate Smith.

Blythe is a crossover entertainment pro par excellence, and she knows how to work it.

Blythe has also proven an ideal and invaluable collaborator to Opera Philadelphia this season (perhaps in the present context the term ought to be co-conspirator); she and the company have successfully put Rossini’s overlooked Tancredi back on the map. And, with this loving and irreverent follow-up pastiche, they may with comparable success have buttonholed the attentions of an entire new cadre of opera enthusiasts.

For that matter, while Two Queens was billed as a one-night, one-city one-off, what might the future hold? If reactions at ALT were any indication, there is almost assuredly a big and boisterous constituency at large for just this kind of fractured valentine to the human spirit, the human voice, the fluidity of human identify, and the vagaries of love.

And a lot of fun clubs where it could be played.

All Hands on Deck

While Two Queens, One Night evinced an intentionally extemporized, paper-moon-muslin-sky casualness to it, its insouciance belied a great deal of ingenuity and craftsmanship on many levels. The concept, script and direction were all of a piece – flamboyant excrescence from the mind of Philadelphia performance artist John Jarboe who also happens to be the artistic director of  (wait for it) the “Bearded Ladies Cabaret.” 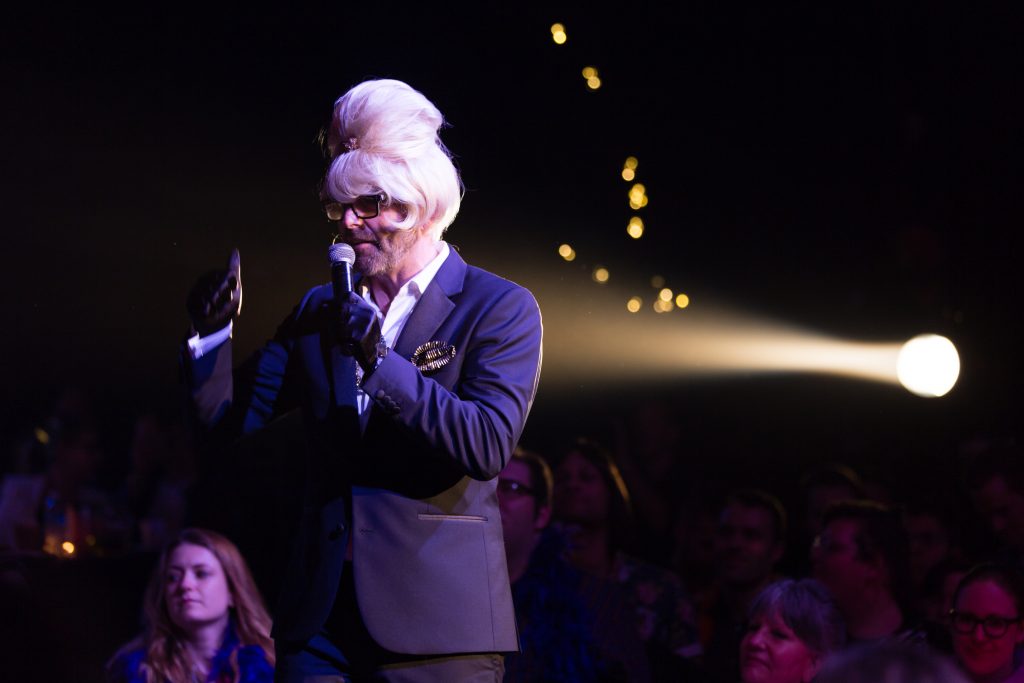 The evening’s musical arrangements were intricate, novel and solid, the work of New York-based composer Daniel Kazemi, who not only crafted excellent pop/classical mashups here, but marshalled the combined forces of a pop-rock combo onstage and a string quartet situated in the midst of the audience to aural perfection.

Blythe’s and the ensemble’s wild and wonderful costumes, as well as the production’s overall scenic design, were by the irrepressible Machine Dazzle (yes, that’s a person, a.k.a. Matthew Flower), while Martha’s costumes were by Max Brown, and the effective lighting design was by Drew Billiau.

Not many a civic arts organization can boast a general director who will giddily bustle about during a pre-performance happy hour distributing pink feather boas from a wicker basket – but Opera Philadelphia can. Fleet and nimble, the company has a certain quicksilver in its veins – a daring funambulist, confident, cunning and comfortable in its own skin.

“It’s not over yet!” the bewigged Devan continued from that post-performance burlesque runway, exhorting the audience, “Let’s stay and dance the night away!”

And, as house music struck up, Devan, members of his staff, plus other “bigwig” donors, and a Bacchic swarm of new-minted company partisans proceeded to do just that. 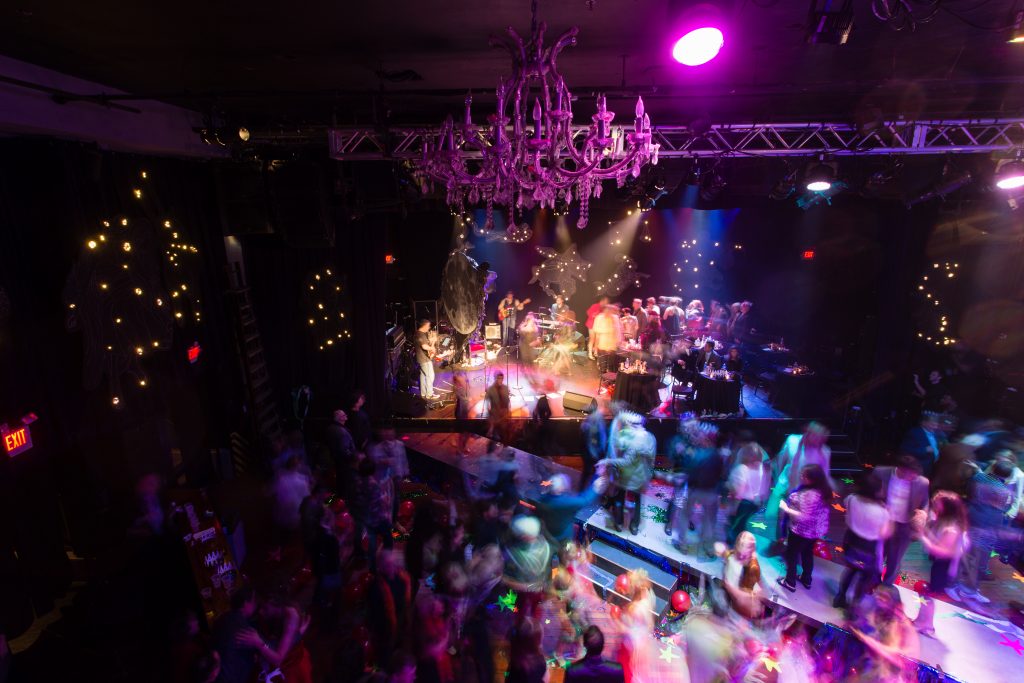 Stephanie Blythe is next singing the roles of both Dido and the Sorceress in the Mark Morris dance adaptation of Purcell’s actual Dido and Aeneas, at the Brooklyn Academy of Music from March 15 through the 19, 2017. More information can be accessed here.