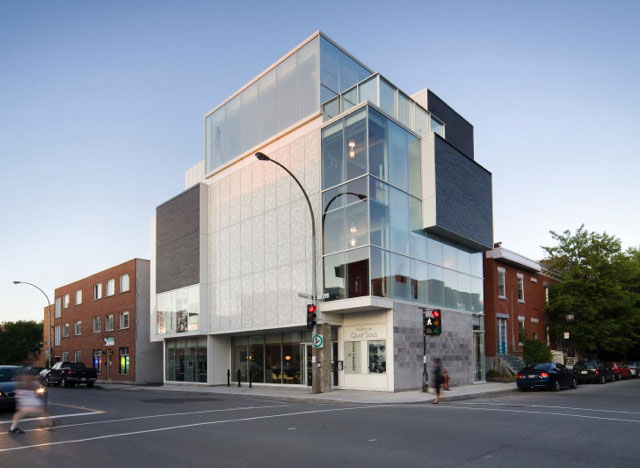 Wajdi Mouawad nicknamed it the “great little theatre”. As far as “great” is concerned, Quat’Sous has the fame — and now also the age, as it celebrates its 60th anniversary. As for “little”, the theatre has retained its modest seating capacity, wishing to preserve its intimate character and emphasize its artistic risk-taking.

Since the ebullient Paul Buissonneau founded the Théâtre de Quat’Sous in 1955, six artistic directors have succeeded him, each having their own particular vision while nevertheless maintaining continuity with their predecessors. Eric Jean, the theatre’s head since 2004, reflects on the moments that shaped its history.

Homeless at first, yet including among its ranks Jean-Louis Millette, Yvon Deschamps, Claude Léveillée, and Louise Latraverse, the company moved into a former synagogue on Montreal’s Pine Avenue. Buissonneau recalls having mortgaged his house to pay $30,000 to acquire the building. “Paul didn’t have a penny to open the theatre,” says Eric Jean. “Thanks to a waitress at a restaurant where he was a regular, he met Sam Abramovitch, who admired Buissonneau’s work and offered to finance the necessary work before the opening.” The theatre was inaugurated in December 1965 with the play La Florentine, by Jean Canole.

In 1968, the Théâtre de Quat’Sous made a big splash with L’Osstidcho, a completely off-the-wall show featuring Robert Charlebois, Yvon Deschamps, Mouffe, and Louise Forestier. Directed by Paul Buissonneau – to whom we also owe the title, a phonetic word using the expletive “osti” and anglicism “show”, of this musical and theatrical happening – L’Osstidcho would be one of the markers of the profound upheaval experienced by Quebec society. That year André Brassard directed En pièces détachées, an early Michel Tremblay play, which marked the beginning of a long collaboration between the two artists and the theatre. Incidentally, this work will become the subject of a reading by Sébastien David in May 2016.

Founder of the traveling theatre La Roulotte, which puts on shows in Montreal’s parks every summer, Buissonneau welcomed young artists to his theatre. Rejecting convention and compromise, Buissonneau, a self-taught man and proud of it, considered Quat’Sous an artisanal theatre, where everyone could have a finger in the pie. He was even involved in set construction and costume making. “Paul Buissonneau was a jack-of-all-trades. He did a lot with a little,” says Jean. “This philosophy, which puts creativity and ingeniousness at the forefront, later influenced us a lot. For Paul, the process was just as important as the result.”

After having put on plays like Théâtre de chambre, Orion le tueur, and La tour Eiffel qui tue, Paul Buissonneau retired as artistic director in 1984, but for the rest of his life, he kept a close (and tender) eye on “his” theatre. He was succeeded by actress Louise Latraverse who, faithful to Buissonneau’s mission, sought to discover new talent – notably, the talents of Robert Lepage and René-Daniel Dubois, with the play Being at Home with Claude.

In 1986, Louison Danis took over the theatre’s direction for a period of two years, during which she presented plays such as John Hopkins’s Écart-temps, directed by Alexandre Hausvater, and In Extremis by William Mastrosimone. She handed over the position to Pierre Bernard who, while working as Louise Latraverse’s press attaché, had organized the Quat’Sous General Auditions with Andrée Lachapelle and Suzanne Léveillée.

With Pierre Bernard, Théâtre de Quat’Sous moved toward a new, more intimate repertoire. He mounted English, American, and Canadian plays, by authors such as Brad Fraser, David Ives, and David Mamet, which had seldom been translated at that time. “Pierre Bernard has an unrivalled instinct for discovering works and artists,” says Eric Jean. “Actors like Luc Picard, Sylvie Drapeau, Élise Guilbeault, James Hyndman, and Mario St-Amand made their debuts at Quat’Sous. Plays like Trainspotting or Comme des restes humains were able to engage many viewers who were unaccustomed to theatre.”

At the start of his first season as artistic director, Bernard presented Elvire Jouvet 40, a play by Brigitte Jacques. Directed by Françoise Faucher and performed by the young Luc Picard and Sylvie Drapeau, it became a huge success. “That play was a veritable lesson in theatre! I suggested to Pierre Bernard that we do a reading of it in May 2016, in which he would play the role of Louis Jouvert. He teaches at the National Theatre School, so it would be a nice allusion,” explains Eric Jean as he laughs.

After twelve years at the helm, Pierre Bernard invited author, actor and director Wajdi Mouawad to take over the adventure. From 2000 to 2004, Mouawad racked up accomplishments, presenting plays such as Sylvia Path’s The Bell Jar, directed by Brigitte Haentjens, and developing his own shows, including Littoral and Incendies, remarkable works that were later adapted for the silver screen.

Under his direction, Théâtre de Quat’Sous turned to works by African and Middle Eastern authors. Making ‘openness to the other’ his motto, Mouawad pursued Buissonneau’s desire to turn Quat’Sous into a centre of culture, not just a theatre: a crossroads for disciplines and artists from around the world. Eric Jean explains, “Wajdi also brought back dance to Quat’Sous, as Paul had done before him. Jocelyne Montpetit got her start in this theatre. Wajdi was bold in his direction of the theatre. That was how he gave Pascale Contamine, Évelyne de la Chenelière, and me carte blanche, while we were still young artists. Few directors have this audacity, this beautiful arrogance.”

Designated the “natural heir” by Pierre Bernard and Wajdi Mouawad, director Eric Jean took over the direction of the theatre in August 2004. Though he walks in his predecessors’ footsteps, he doesn’t hesitate to take the road less traveled. Multidisciplinary creations and dramatic and cultural diversity are all part of his credentials and his heritage.

In February 2008, the dilapidated theatre was completely demolished and rebuilt. Eric Jean oversaw the work with a foreman’s eye, careful to preserve the identity and soul of Quat’Sous. Eighteen months later, the brand-new theatre reopened its doors. With decidedly contemporary architecture, the foyer is bathed in light, thanks to the large glass panels that make up the façade. The performance space has retained its capacity to seat 170 people, in order to remain a place for audacious performances. “Paul was very proud of the new location,” remembers Eric Jean, “and of what I’ve tried to make of it: a crossroads where music, poetry, and literature intertwine. This reassured me and I kept going, one step at a time.”

Eric Jean asked himself how to celebrate the 60th anniversary: remembering the past, talking about the best productions, re-staging shows? “In keeping with Paul’s thinking, I didn’t want to be too nostalgic; I wanted to focus on the present and the future,” he explains. “Three shows will be produced this season, including Variations sur un temps [taken from All in the Timing]by David Ives, which Pierre Bernard premiered in 1996 and which was such a smash hit that 26 additional performances were added! It must be mentioned that the cast was exceptional. It included Diane Lavallée, Luc Picard, Marc Labrèche and Élise Guilbeault.”

La fête sauvage, in collaboration with the Jamais Lu festival, will bring together eight authors and twelve actors on stage. The work revolves around thirty-somethings talking about the idea of territory, our aspirations and our dreams. “This show, for me, is a distant relation of L’Osstidcho,” says Eric Jean. “There will be a live band on stage, speeches, and a certain irreverence.” Young director Charles Dauphinais will mount the third house premiere, Dénommé Gospodin, a work by German author Philippe Löhle that questions capitalist society and plays with structure.

There’s a big party planned for December 4, an “open house” night during which Quat’Sous’ important stages will be featured through posters, a slideshow, and personal accounts. Throughout the year, an exhibition of 12 photographs will tour Montreal’s neighbourhoods. A 32-page souvenir book, produced in collaboration with the magazine Nouveau Projet, will be released in September.

Though anniversaries are a time for looking back, they are also a stepping stone to the future. What do you dream of when you’re the artistic director of Quat’Sous? “In addition to three productions per season, the theatre welcomes seven or eight touring shows, for which we don’t receive any grants. Every theatre gets financial support to take in shows, except us. Moreover, our conditions are very appealing to companies. We undertake the risk of putting a show on with them; we don’t ask for rental fees, just a cut of the revenues. Reception, ticket services, rehearsal space, performance space, we offer all of that … so, if I have a dream for the future, it would be to get support for dissemination and similar activities. For example, every Wednesday, a children’s choir comes and sings in our rehearsal studio. During L’heure du conte, on Sunday afternoons, Suzanne Champagne tells stories to children whose parents are in the theatre. It’s important that children go to the theatre; Piccolo would have loved that,” Eric Jean insists, with a smile.

On this anniversary, we must also include the great little team of the theatre: “It’s quite a stable team,” declares the director, “with some people having been there for over 20 years. The work environment is very pleasant; we function collectively, which is important.”

The Théâtre de Quat’Sous is the oldest theatre company still active in Quebec. Like a volcano, it bubbles and overflows with desires and challenges, ideas and words hurled into the winds of time. Wherever he is, Paul Buissonneau is no doubt watching over his enfants terribles.