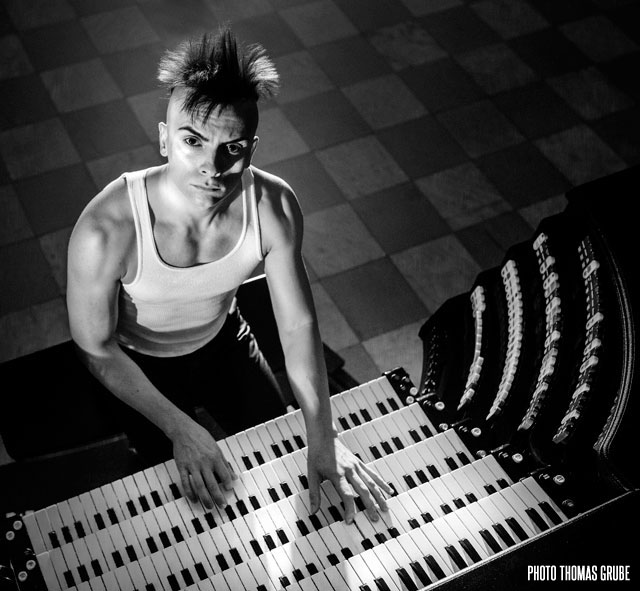 “I am a radical free thinker, an atheist, a sex-positive person and I am against all forms of religion.”

It is with these unequivocal terms that American organist Cameron Carpenter, guest performer at the Montréal Chamber Music Festival in March, opens our interview. It is soon apparent that his eccentricity, his punky hair and rocker clothes are more than a façade; they are the reflection of his original and unique personality. He is known in the organ world for his iconoclastic approach to the instrument and for his trend-bucking ideas.

Carpenter’s originality begins with his instrument: the International Touring Organ, a fully digital organ that he travels and performs with around the world. The organ was custom-built in Massachusetts by Marshall & Ogletree according to Carpenter’s specifications. The design uses audio samples from 34 American pipe organs, some of his favourites. It has a fully-integrated sound and amplification system, can be assembled in under 3 hours, and can be transported by truck. The console has 6 assembly modules and 5 keyboards.

“My relationship to the organ is just like a violinist’s to their violin,” Carpenter explains. “I want to work with a single instrument, so I can feel at home psychologically and artistically. One of the great joys of being an organist is that every organ is different, but only in the sense that you constantly get to experience a new instrument. It is not a joy if you want to succeed as a competitive musician in the 21st century, which is not the case for most organists. I played on other instruments for most of my career, until the year 2000, and I love pipe organs. I see my organ as a parent to those instruments, undeniably. However, most organs are installed in churches, and I don’t believe that real music can be made in a church.”

Carpenter never misses an opportunity to chip away at traditional conceptions of the organ.

Cameron Carpenter sees his International Touring Organ as the inheritor of a long American tradition of organs that he qualifies as “municipal.”

“These instruments were designed for general and secular use in auditoriums, theatres, concert halls and municipal buildings, from the end of the 19th century up to around 1930. It’s a fascinating tradition. In my opinion, it was the pinnacle of organ building, thanks to new technologies such as electricity that opened a new universe of musical and architectural possibilities for the organ, possibilities that were unimaginable in previous centuries. For example, the artistic heights of organ builders in Baroque Germany, in the 18th century, were always limited, in a way, by available technology. Prior to the invention of the telephone in 1877, the pipe organ was not only the most complex musical instrument, but the most complex machine ever invented. If the mechanical computers dreamed up by Charles Babbage had existed at that time they would certainly have outshone the organ in terms of complexity, but they had not yet been built.”

It was this same “big machine” aspect that fascinated Cameron Carpenter as a child. He was the son of an engineer and designer of industrial furnaces. He was home schooled. He was fascinated by the furnaces’ control panels and loved to play with them, until he discovered that the organ had even more buttons! He began playing the organ at the age of four.

“When I found out that there was a musical instrument with components like my father’s machines, I wanted to play it. From the very first time I played, I was overcome with a profound sense of time. It’s a feeling that I still get when I play.”

For Carpenter, the organ lies at crossroads of scientific and artistic cultures. “The cultures of computation and machine computation and, at the other end, the culture of building monumental musical instruments all reached their zenith during the tradition of municipal organs from 1890 to 1930. The International Touring Organ is in keeping with this tradition. As a musical instrument, it combines the influences of some of my favourite organs, and it is an extraordinary machine for other reasons. The idea that an organ can be mobile and also top quality, and the fact that a digital organ can be a great instrument still meets with a lot of scepticism. The instruments built by Marshall & Ogletree are the best digital organs ever made.”

His thoughts on the American organ go beyond the physical. He sees a national metaphor in the tradition. “I think that the American organ is interesting socially, because it represents the American ideal of the supposed melting pot, by incorporating historical elements from the French, the Baroque, German, and Romantic organs. It’s the result of all these elements, like the country itself, a uniquely American mix. I find that very interesting.”

“For centuries the organ was a status symbol, because it was the largest, most complex, most impressive of instruments. I think both the church and municipal organs abused this aspect, though it is much more obvious in the case of the church. Many churches deliberately installed the most luxurious and expensive instruments they could find to show off their status, and it is something we are still seeing today. It’s not the role the instrument should be playing, but it’s a trap that these churches have fallen into to glorify the superiority of their religion over others by extoling their riches and power. The organ is a great tool to improve your image. We see it everywhere in smaller cities that acquired extraordinary organs to get one up on their neighbours.”

The digital organ, which is smaller and more accessible, counteracts this excess.

“By costing exponentially less, the digital organ eliminates that rather ugly issue, the status symbol of excess, and the problems that come with it. There are many remarkable organs in Philadelphia. A rich donor there, who has paid for the restoration of several of the instruments, has turned into a kind of organ dictator in the city. This situation is terrible for the instrument and discourages healthy discussion on what an organ should or shouldn’t be.” By creating a new generation of more accessible organs, organists are able to shed many physical and financial constraints.

“If we consider pipe organs to be the only good instrument, we are holding young organists back from having a career, as they can’t own their own instrument,” he says. “They can’t be financially independent; it’s impossible. Even the best musicians are dependent on others, on a church, a donor, an organisation. And the average organist is one of the hardest-working and worst-paid musicians out there. Thanks to the digital organ, musicians can own an instrument that rivals the best organs, and in some ways surpasses them — in precision, for example. There are no mechanical issues, and it never needs to be tuned.”

Cameron Carpenter sees his career as an independent musician, master of his own destiny. He also believes that the digital organ opens new avenues for organists.

“If you want to work as a classical musician at a high level and be well-compensated for it, you have to be independent, and the only way to be independent is to own your instrument. Organists can now be organ builders, in a way, by designing an instrument that works for them. I believe that we are at the start of something new. My organ now has a twin, permanently installed in a concert hall in Florida. It’s interesting, for the first time we have two instruments that are identical to the audience, and these two organists can do projects together. You could have done the same in Montréal, rather than install that ghastly new pipe organ. You could have built a digital organ for the concert hall, another for the university, and a third for another school – all for a third of the cost.”

Cameron Carpenter may have revolutionary ideas about his instrument, but he sticks to classic organ repertoire, expanded with a few personal transcriptions of orchestral works and his own arrangements of more popular music.

“I am giving 45 concerts on this tour. It’s my first time playing in Montréal. To me, classical music is a high-level form entertainment. That is what I try to share with the audience. It is my job to show people the incredible possibilities this instrument offers. I’ll play Wagner and just finished a new transcription of the overture from Die Meistersinger von Nürnberg. I will probably also play some Bach, Piazolla, Tchaikovsky, and Louis Vierne.”