You are at:Home»Classical Music»Leonard Bernstein and Alain Trudel: Eclectic to the Max

The centennial of Leonard Bernstein (1918-1990) has not gone unnoticed. Indeed, his music has made its way the programs of most orchestras this year, our own included.

The Montreal Symphony Orchestra has released a landmark recording of A Quiet Place, presented in a new chamber version. Music director Kent Nagano must be credited with this initiative, which is hardly surprising for this one-time Bernstein protégé of the 1980s.

The Orchestre Métropolitain under Yannick Nézet-Séguin will do its part by performing the Symphony No. 1 (“Jeremiah”) in June 2019 – already having played the Symphony No. 2 (“Age of Anxiety”) for the 2018 Lanaudière Festival. The Orchestre symphonique de Longueuil performs music from West Side Story around the time these pages hit the stands. On Nov. 7, Alain Trudel will lead the Orchestre symphonique de Laval (OSL) in an eclectic evening of Bernstein works written for the ballet, musicals and symphony orchestras.

Bernstein’s output is so remarkable in its sweep that its variety constitutes his greatest legacy. Only now are we coming to grips with the depth of his artistic contribution and the exceptional nature of the man himself, a composer of note for sure, but a conductor and a teacher sans pareil. 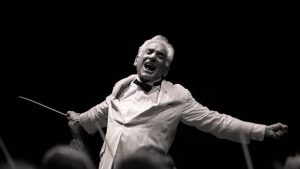 Bernstein was a teacher of the first order. He understood the mass appeal of television from the beginning and knew how to use it. He turned shows like Omnibus, Lincoln Presents, Ford Presents and Young People’s Concerts into platforms for imparting knowledge to young conductors, or just to build a wider following for symphonic music.

Not only must he be credited for nurturing generations of music buffs and musicians but his success was due to his savvy way of bringing prestigious orchestras into living rooms. In the 1950s and 60s, he acquired iconic status for his ability as a communicator. Fortunately, his knowledge has not been lost. Many videos are available, readily accessible for the enjoyment and edification of a broad-based community of music lovers.

Alain Trudel is one conductor who takes his cues from Bernstein. Like his predecessor, he reaches out to a wide audience with equal amounts of enthusiasm and knowledge of the music. He is not one to cut corners, but he has the knack of tailoring his presentations to every age group, even the youngest. One such initiative is to get toddlers of up to four years old and their parents listening to symphonic works in their entirety. Ditto first-graders, high schoolers and seniors.

“People need exposure to this music,” Trudel explains, “and to do that, you have to get them into the concert hall, the younger ones even more. But content is paramount.” His object is to maintain the highest standards, regardless of the situation.

“You can’t lower the playing level or the quality of the repertoire.” he adds. “We put in just as much effort in a Mahler symphony as a youth concert.” Trudel also champions the music created in our midst, and he rarely misses an opportunity to program a work by a Québécois composer. In its current season, the OSL breaks with its tradition of having a composer-in-residence. Instead it will perform a number of commissions and existing pieces from such varied composers as Jan Järvlep, Petros Shoujounian, François Dompierre and Nicole Lizée. 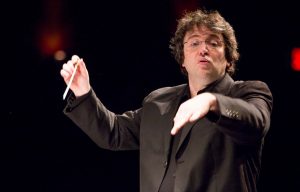 A Myriad of Influences

As for his upcoming Bernstein concert, Trudel points out: “I wasn’t interested in zeroing in on one particular aspect of his work, but to roam through it in a more eclectic way.” Bernstein’s eclecticism, it must be noted, was not at all gratuitous, but very much part of his DNA.

Son of Jewish immigrants from Russia, he was exposed early to traditions other than his own, everything from jazz to musicals and the classics. He was of a generation of American composers who drew on several styles while remaining faithful to tonal music, with Gershwin, Copland and Ives as role models. Bernstein’s first watershed occurred in January 1944, when he conducted the premiere of his First Symphony (“Jeremiah”) in Pittsburgh.

From then on, his career took off. Three months later, in April, his score for the ballet Fancy Free was premiered at the Metropolitan Opera House to choreography by Jerome Robbins. By year’s end, in December, the musical On the Town, derived from the ballet, hit Broadway. His music was now making the rounds of concert halls, opera houses and theatres. The musical language was laced with hints of Copland, Stravinsky, Hindemith, jazz and Latin rhythms, with metric modulations and bitonal harmonies added into the mix.

Those ingredients are precisely what Trudel wants to emphasize in his concert. Three decidedly jazzy dance episodes from On the Town will be heard first. Next up are excerpts from West Side Story, the pieces imbued with Latin rhythms and lyrical melodies unfolding over a dissonant backdrop reminiscent of an urban environment.

The magnificent Serenade follows. Scored for solo violin, harp, strings and, this at times tempestuous then ethereal work was commissioned by the Koussevitzky Foundation and premiered in Venice in 1954 by the Israel Philharmonic under the baton of the composer with Isaac Stern as soloist. For the Nov. 7 concert, Martin Chalifour will assume the solo duties. The evening closes with Aaron Copland’s Billy the Kid and the Deux Préludes by François Dompierre, undoubtedly the most eclectic of our home-grown composers. To paraphrase from Green Garden by Laura Mvula – an artist much appreciated by the Trudel these days: “May he fly of the winds of a butterfly!”