You are at:Home»Classical Music»Classical»Opéra de Montréal drives into the digital future
Advertisement / Publicité

The future of performance is looking digital, at least in the short term. Last week the Opéra de Montréal unveiled an online double bill with piano accompaniment that made a good case for the viability of the format while leaving us less than fully convinced of the merits of the works themselves.

First up was Francis Poulenc’s well-known La voix humaine, a solo opera of 1958 based on Jean Cocteau’s 1928 play of the same name. A jilted woman engages in a telephone conversation with her former lover. There are frequent interruptions caused by the (then) notoriously unreliable French telephone system.

Whether the stop-and-go rhetoric that results is a source of suspense or irritation might depend on the individual listener. Fetchingly melodious as the score is, the tragic denouement (here reconceived, not very realistically, as involving an automobile and carbon monoxide poisoning) strikes me as out of step with the circumstances.

Still, soprano France Bellemare, smartly dressed in period style, is in rich voice and Esther Gonthier brings out ample colours in the piano reduction of the orchestral score. The abstract décor of Étienne René-Contant has a cool, professional look.

The vintage car remains on stage for L’hiver attend beaucoup de moi, here given its premiere. Two women find themselves on a country road on a snowy evening, having stopped before arriving at a shelter. They reflect at length on the hardships of life. Léa (soprano Vanessa Croome) is expecting a child. Madeleine (mezzo-soprano Florence Bourget) views this as a positive development. Both are escaping abusive relationships, although details are lacking.

Indeed, the lack of specificity becomes something of a motif in this outwardly passionate but hard-to-follow 35-minute piece. “Comment j’en suis arrivée là?” asks Léa. Many are the earnest questions in Pascale St-Onge’s libretto, few the meaningful answers.

The frustration for the viewer is compounded by the essential sameness of Léa and Madeleine, even if the former has the more dramatic and high-flying vocal part. Composer Laurence Jobidon describes her style as French and impressionistic – accurately enough, although there are surprising traces of Liszt. Jennifer Szeto, the excellent pianist, is sometimes required to strum the strings.

The direction of Solène Paré amounts to little more than finding various ways for the protagonists to stand around in the snow. One wonders whether L’hiver attend beaucoup de moi will ever be performed before a live audience. It might be an early example of a purely online artifact. Interesting that Quebec Culture Minister Nathalie Roy posted her personal approval of the presentation during the Nov. 5 premiere. You will recall that Quebec has awarded the OdM $700,000 for digital initiatives. The webcast is available until Nov. 19.

Also online is the 2020 Azrieli Music Prizes Gala as filmed in Bourgie Hall. I remain impressed by this venue as an audio-visual recording space. Some of the dissonant fortissimos produced by the Nouvel Ensemble Moderne under Lorraine Vaillancourt could be taken for the work of 50 musicians, not 12. The famous Tiffany windows do not hurt. 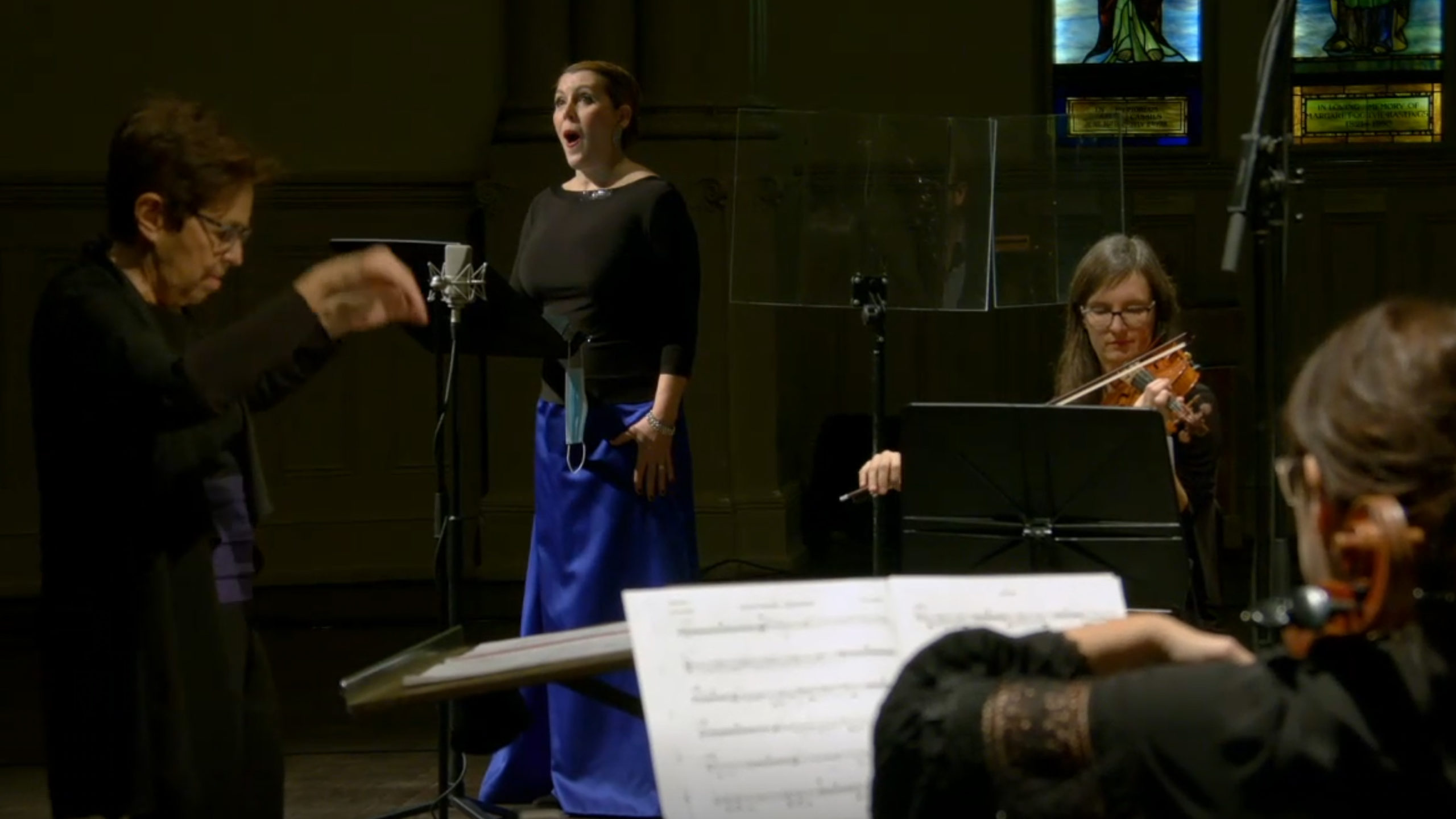 The concert includes three prizewinning works. The Azrieli Commission for Jewish Music resulted in Estro Poetico-armonico III, a song cycle by Netherlands-born Yotam Haber based on modern Israeli verse and liturgical chants recorded in Rome in the 1950s. The title appears to refer to Vivaldi. Rest assured that there is little if any trace of the baroque in this tough, percussive and relentlessly modern piece scored for mezzo-soprano (the impressive Krisztina Szabó) and chamber orchestra. The words remain mysterious. Perhaps maintaining a certain mystery is one of the composer’s objectives.

Winner of the inaugural Azrieli Commission for Canadian Music is Arras by Keiko Devaux, a Montreal composer who has surmised that noncommittal swelling and swirling à la John Luther Adams is a formula for success in this day and age. The Azrieli Prize for Jewish Music went to Israeli-born, Australian-based Yitzhak Yedid for Kadosh Kadosh and Cursed, a work of many parts that brings together Western and Middle Eastern styles in a manner more confrontational than cooperative. A more equitable distribution of energy and lyricism emerges in Pierre Mercure’s triptych Dissidence (1955) as expanded for chamber orchestra by Jonathan Monro. Soprano Sharon Azrieli is the expressive soloist. The concert is available free on www.medici.tv and the Azrieli Music Prizes Facebook page.