Russia and her neighbours remain a rich source of musicality in many categories. Opera fans can confidently add the name of Hibla Gerzmava to the international inventory of A-list sopranos based on what was heard Sunday evening in Koerner Hall.

Not that this native of Abkhazia is an unknown quantity. In 1994 she became the first vocalist to win the grand prize of the International Tchaikovsky Competition, and made her Royal Opera House debut more than a decade ago. Next season Gerzmava takes the title role in a new Metropolitan Opera production of Aida. Yet her second Toronto appearance under the auspices of the Show One organization had me wondering just where this woman of lustrous voice and grand stage presence had been hiding all my life.

The program was an intriguing mix of aria and song. In the first half we heard Russian romances. Wistful lyricism prevailed in favourites like Glinka’s “The Lark” (a good showcase for the articulate and finely contoured accompaniment of pianist Ekaterina Ganelina) and Tchaikovsky’s “It Was in the Early Spring.” Gerzmava’s gleaming tone lost none of its beauty at low volumes yet we got an inkling of the Verdian power lurking beneath that shimmering surface in Glinka’s robust waltz “The Fire of Longing Burns in my Heart.” 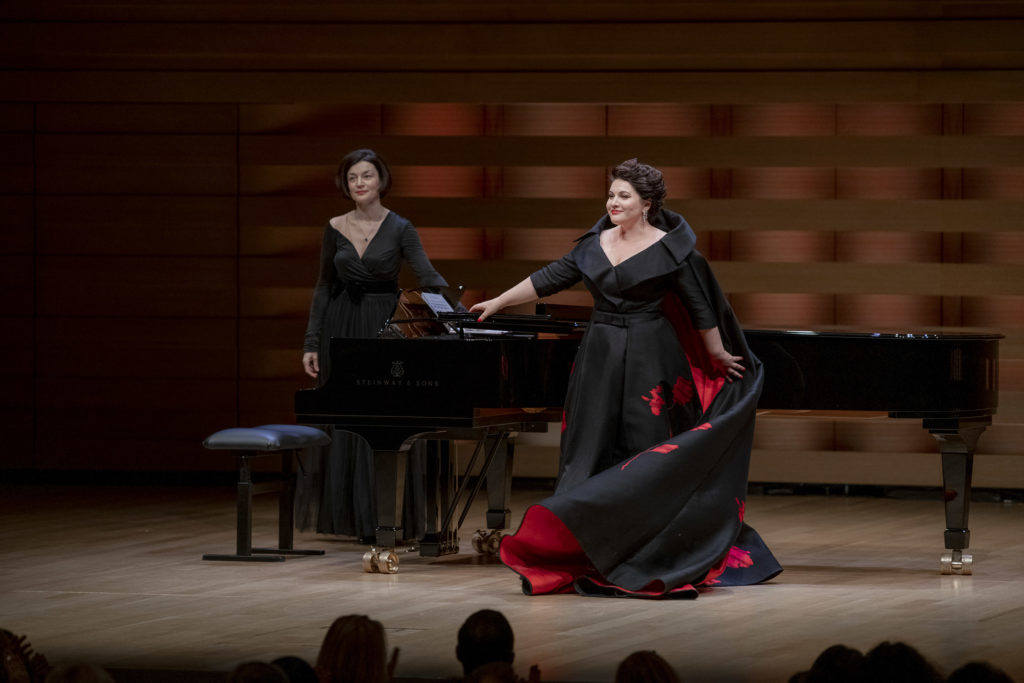 Rimsky-Korsakov’s subtleties were done justice in “Not the Wind” and the Rachmaninoff selections all benefitted from an exquisite interplay of voice and piano. The forceful high B Flat and operatic drop of an octave near the end of “They Answered” provided a handy illustration of Gerzmava’s assured technique and steady focus in multiple registers. Never did the vibrato draw attention to itself – which is a comment on its unerringly musical application.

There was, of course, more after intermission, in the mad scene from Donizetti’s Anna Bolena, an impressive showpiece of fiery sound, confident acrobatics and diva-class emotional communication. Alternating arias with French mélodies, Gerzmava adapted quickly to the neo-baroque dignity of Reynaldo Hahn’s “À Chloris,” which she brought forth in a shadowy, mezzo-like tone.

Then came “Pace, pace, mio Dio” from Verdi’s La Forza de Destino, with its full-blast curses at the end, followed by the dreamlike vision of Fauré in “Après un rêve” and the charming “La papillon et la fleur.” In this number Gerzmava waltzed confidently from the piano and used the stage. This is no stand-and-deliver singer.

The concluding number was “Casta Diva” from Bellini’s Norma, a great favourite that is sometimes (as it was here) drawn out in a manner that necessitates inopportune breath breaks. Happily, we got the cabaletta. There were three light encores, including one that elicited rhythmic clapping from a crowd well-fortified with Russian speakers. 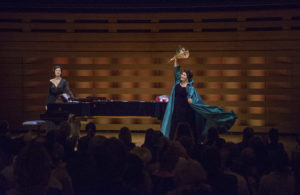 These listeners probably did not need texts for the romances. None were provided. Rather unfortunately, there was clapping between songs in the first half, a tiresome business that could easily have been avoided with a request to observe the traditional practice of applauding after sets by the same composer.

It remains to be said that Gerzmava looked every inch the star in her elegant gowns. What a fine thing it would be to see and hear her on the opera stage. She is Liù in Puccini’s Turandot at the Met in April. To judge by the information available online, she appears as Elizabeth in Verdi’s Don Carlo at Covent Garden in June and July. Three of those performances have a certain Plácido Domingo pencilled in as Rodrigo. Also in the cast: Ferruccio Furlanetto, Michael Fabiano, Elīna Garanča. Something to think about.