Born in 1986 in Belarus, Wlad Marhulets is a young Polish-American composer and the winner of the inaugural Azrieli Prize for Jewish Music with his Klezmer Clarinet Concerto. He started his music studies rather late at the age of 16, when he first heard a recording of klezmer clarinetist David Krakauer. He was drawn so much to this music that he started studying the clarinet and composition. A few years later he began studying at Julliard in composition under a full scholarship with Oscar and Pulitzer Prize winner John Corigliano. Marhulets says that the klezmer recording of Krakauer changed his life and encouraged him to become the musician he is now. He was lucky enough to be able to work with this famous clarinetist who inspired in him the love of klezmer music for the first time. Marhulets said: “The discovery of Jewish music when I was a teenager transformed my whole existence.” 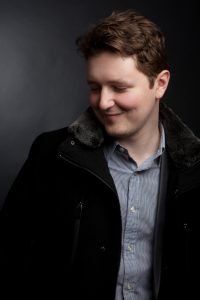 The Commandes Azrieli were created in 2015 by Sharon Azrieli Perez, herself a soprano and well-cultured in Jewish and cantorial music. The prize has the goal of providing the world with new Jewish music. Azrieli Perez says that she was delighted with the judges’ choice, recognizing Marhulets as a young composer at the beginning of a brilliant career. She also acknowledges his Klezmer Clarinet Concerto as a “dynamic, totally modern work, but that recalls traditional Jewish music.” The jury members were from various fields and included composers Boris Brott and Ana Sokolović, musicologist Neil Levin, and conductor Steven Mercurio. Winning with the Klezmer Clarinet Concerto, gives Marhulets a prize of $50,000, as well as a performance of the work by the Montreal Symphony along with The Seven Heavenly Halls by composer Brian Current.

Now living in Los Angeles, Marhulets has met great success with many pieces composed for film, such as The Orchestra of Exiles, The Giver, The November Man, and Sabotage. He also composed a “klezmer opera,” The Property, for the Chicago Lyric Opera, and many other works for official events or famous ensembles, such as the JACK Quartet. He is also the winner of the Susan W. Rose Prize, the Peter D. Faith Prize, and of no less than five prizes from the ASCAP, including the prestigious Leonard Bernstein Prize. In June, Marhulets saw the premiere of one of his orchestral works composed specifically for the Krakow Jewish Culture Festival.

The Montreal Symphony under Kent Nagano will perform the Klezmer Clarinet Concerto on October 19. Click here for more information.