The McGill Schulich School of Music Golden Violin Competition is a yearly prestigious competition made possible by the generous donation of businessman and philanthropist, the school’s namesake, Mr. Seymour Schulich. In 2015, Joshua Peters won the First Prize. Born in Winnipeg, Manitoba, Peters began playing violin at the early age of four. As he grew up, he moved around the continent to study with Axel Strauss at McGill, and with Jonathan Crow, Denise Lupien, and Ian Swensen at the San Francisco Conservatory.

Peters’s main interests are chamber and contemporary music. He had the opportunity to collaborate with many renowned artists, such as Menahem Pressler, Kim Kashkashian, André Laplante, Steven Dann, and members of the Emerson, Concord, St. Lawrence, Guarneri, and Pacifica quartets. He has also studied chamber music with members of the Alban Berg, Guarneri, Cleveland, Juilliard, Kronos, Miró, and Takács String Quartets. Concerning contemporary music, Peters received the guidance of many famous composers while performing their works, including John Adams, Krzysztof Penderecki, Richard Wernick, Christos Hatzis, T. Patrick Carrabré, and Randolph Peters. From 2010 to 2012, he was part of the McGill Contemporary Music Ensemble. 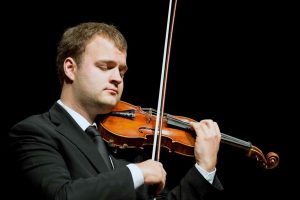 The young violinist played as a soloist with the Winnipeg Symphony Orchestra, as concertmaster of the McGill Symphony Orchestra, and as a member of the Montreal Symphony Orchestra. This is not his first major competition win. He recently won First Prize from the WMC Doris McClellan Competition in 2014 and the Eckhardt-Gramatté National Music Competition (which aims to promote contemporary music) in 2015. He was also the laureate for the Jeunesses Musicales du Canada’s Peter Mendell Prize in 2013, a prize given to one full-time string student in Quebec each year. Joshua Peters also benefited from the financial support of the Sylva Gelber Foundation and the Manitoba Arts Council. Moreover, he has the opportunity to play on an 1869 Vuillaume violin with a Vuillaume model bow, lent by the Canada Council for the Arts Musical Instrument Bank.

For the Final of the 2015 Golden Violin Competition, Peters played the Violin Sonata No. 5, op. 53 by Mieczysław Weinberg (1919–1996) and the Sonata for solo Violin No. 5 by Eugène Ysaÿe (1858–1931). The fifth Weinberg Sonata is a very romantic and passionate piece, always swaying between nostalgia, despair, anger, and hope. The recurrent use of modal and augmented seconds, combined with syncopated and pointed rhythms, gives several colours evoking the folkloric Slavic culture, while long and lyric melodic lines provide the music with simple but efficient romanticism. The second sonata Peters played for the final, the Sonata for solo Violin No. 5 by Ysaÿe, is very interesting. Consisting of only two movements, this ten-minute sonata combines a very introverted first movement, L’aurore (Aurora), with medieval-inspired joviality in the second, Danse rustique (Rustic Dance).