British Columbian soprano Chelsea Rus’s story is straight from the movies. Already accomplished at the beginning of her international career, no one would think she had never even actually heard an opera before her first year of college. While she played piano and sang since her childhood, she did not give much attention to classical music – she was busy playing jazz and belting Ella Fitzgerald. After watching La Traviata brought her to tears, she began a whole re-education, working her voice in ways she never had before. Years of hard work have paid off: last year she won the inaugural Elizabeth Wirth Vocal Prize, held at the McGill Schulich School of Music. After carefully choosing her competition pieces with her teacher Joanne Kolomyjec, she made up her mind on works by Puccini, Massenet, Gounod, and Richard Strauss. The judges are said to have been quite impressed by Rus’s control of her program. 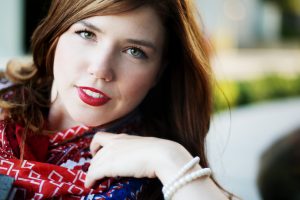 Rus recently received her Master of Music degree from McGill University. She has been a soloist several times with Canadian symphony orchestras, including the Vancouver Symphony Orchestra and the Okanagan Symphony Orchestra. This December, she will appear as the soprano soloist in Handel’s Messiah with the Orchestre Symphonique de Laval.

The young soprano is not new to competitions; in 2014 she won the University of British Columbia’s Johann Strauss Competition, which allowed her to study at the Mozarteum in Salzburg with sopranos Helen Donath and Anna Tomowa-Sintow. A year later, she travelled to Amsterdam as one of the finalists for the Belvedere International Competition. In 2013, she took part in the Cunning Little Vixen in the role of Lisak with the Ústí nad Labem Opera House in the Czech Republic.

Chelsea appeared in many operas produced by McGill over the past two years, including Venus and Adonis (Venus), Gianni Schicchi (Lauretta), Little Women (Beth), and L’Elisir D’Amore (Adina). She also sang with the Kelowna Opera in the Marriage of Figaro and was a member of the female chorus in Benjamin Britten’s The Rape of Lucretia this past summer. This coming season, she is a resident young artist at the Atelier Lyrique with the Opéra de Montréal. Rus will keep busy until 2017 since the Opera Kelowna called her back to interpret the role of Mimì in La Bohème. Rus was recently named one of CBC’s Hot Canadian Musicians Under 30.

Asked if she misses jazz, Rus replies that when she sings opera, she can be inspired by jazz singers, since all music needs fluidity as well as the spirit of improvisation.