You are at:Home»Education»Discovering the treasure of the viola: Pièces de concours by Jutta Puchhammer-Sédillot

As soon as I entered her office, I felt the passion that drives Jutta Puchhammer-Sédillot as she spoke about her instrument. She explained to me that “among the strings, the viola’s register is the closest to the human voice. Every string of the viola has its own tone.” An accomplished Viennese-born violist, Puchhammer-Sédillot is professor of viola in the Faculty of Music at the University of Montreal and is as passionate about the repertoire as she is about teaching the instrument. She regularly attends viola conferences around the world, where she shares her discoveries and reflections with other internationally-acclaimed violists. Recently, she recorded an album called Pièces de concours based on a historical research project which lasted several years.

Pièces de concours brings together eighteen works composed specifically for viola by French composers for what is called the concours (final exam) at the Conservatoire de Paris. It should be noted that, even today, violists mainly play transcribed compositions for other instruments, particularly for the violin, since the viola has long been deemed an inferior instrument in the string family. In fact, the first classes held for violin and cello at the Conservatoire de Paris date back to 1795, while it was another hundred years before there was a class for violas, led by Theophile Laforge. In spite of this advance, violists were still considered to be lesser violinists and suffered by comparison. It is still believed that they should adapt to the same techniques and requirements as violinists; consequently, no institutionalized teaching methods or techniques have been developed specifically for this instrument. 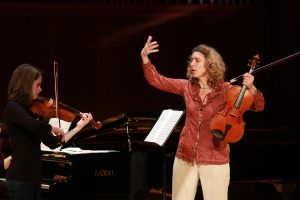 Yet Puchhammer passionately asserts that the viola differs from the violin in several aspects, particularly in tone and technique. For example, certain movements which are comfortable for the violin are quite awkward with the longer and wider neck of the viola. This is why Puchhammer’s goal for some time now is to rediscover compositions that highlight the viola, offering their richness to the world of music – especially to violists. Over several years, Puchhammer has researched this little-known field, even going to Paris to search through the list of compositions written over the years for the final exams of the viola class at the Conservatoire. Her final selection is several works unearthed in the City of Light. She discovered that twenty-seven pieces were composed between 1896 and 1940 for the viola, several of which were dedicated to Theophile Laforge. The one that is best-known and most popular is, without doubt, Georges Enescu’s Concertstück, composed in 1908. The production of new compositions for the Conservatoire stopped abruptly with the start of the Second World War.

Knowing the history of the viola, Puchhammer-Sédillot’s curiosity and passion is understandable. Her fervent wish is that her work serve not only for the instrumentalists to whom she is dedicated, but also the wider public in discovering the repertoire. Together with her album, she published the scores from her research in a collection for educational purposes. She has already made it a requirement for all her students to play one of the pieces from this collection. She confirms that they loved playing music that was specifically written for their instrument. At the same time as this successful endeavour, Puchhammer contacted The Juilliard School in New York to promote her project and offered to repeat the experience with their viola class.

Since the compositions are final exam pieces, they require a high degree of virtuosity, both technical and musical, and they showcase the instrument better than the transcribed pieces from the violin’s repertoire. There is much to discover in this album, equally about the composers as about the tone and personality of the instrument, which is less known than the violin or the cello. 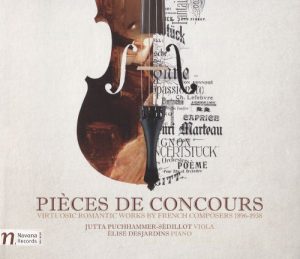 Jutta Puchhammer-Sédillot hopes to continue her project as she has discovered more compositions written for the viola than those which appear on the album. Before I left, she showed me the PowerPoint presentation she has prepared for an upcoming conference on the history of the viola’s repertoire. It’s clear, both in her words and actions, that she cares deeply about the advancement and the future of viola pedagogy. With the success of this album, there is no doubt that she’ll reach her goals!